Perhaps a better title would have been Sex, Drugs and Misogyny. Actress Asia Argento, daughter of famed Italian director Dario Argento, made a splash with the thinly-veiled autobiographical Scarlet Diva when it premiered back in 2000. The film details the grotesque journey of a young actress through a dark, psycho-sexual drama. Raw and intense, it made a splash on the indie and international film festival circuit. Years later, it is now making waves for other reasons.

Asia Argento is the rare triple threat in Scarlet Diva as its writer, director, and star. The fierce and confident indie film has come back under the spotlight when Asia Argento revealed in public that Hollywood producer Harvey Weinstein allegedly raped her. The horrific act is depicted in Scarlet Diva, exorcising her trauma through the film years before she would go public about the rape. Asia Argento coming forward in 2017 practically began the #MeToo movement, which has up-ended Hollywood over the past year.

In an ironic twist, #MeToo accusations have since come forward against Argento herself from an underage boy. These undercurrents make this new home video release of Scarlet Diva timely. The movie provides an intimate glimpse into Argento’s worldview at the time and experiences making it.

Made on a shoestring budget and shot on the novel format at the time of Digital Betacam, Scarlet Diva is guerrilla filmmaking at its finest. Anna Battista (Asia Argento) is a rising young Italian actress, flying from city to city across Europe and dealing with the abuses thrown at young starlets in the film industry. Her sordid lifestyle includes one-night stands, rampant drug use, and encounters with sleazy men looking to exploit her. She is more or less broken, rarely in control of her own fate. Anna pines for an Australian singer she seduces, conveniently leaving her behind in Europe.

The signature moment in Scarlet Diva of course is the sleazy producer Mr. Paar (Joe Coleman), modeled after Harvey Weinstein, forcing himself on Anna in a hotel, nakedly chasing her down the hall. It’s a moment of real terror and even absurd in its recreation, no matter how accurate the scene portrays reality.

Don’t think Scarlet Diva is just one scene made famous because of Argento’s recent revelations. It’s a gripping, intensely personal depiction of a young woman struggling in an industry that chews up young stars all the time. There is a shocking honesty to Anna’s wild behavior that makes Scarlet Diva utterly convincing and authentic.

This is not a film that pulls its punches. Everything has an edge, from the supposedly “real” sex scene involving Anna’s friend and her abusive boyfriend, to characters doing actual drugs on screen. This is a young actress pulling the curtain back on the often sordid life behind the camera and in the industry she grew up.

Asia Argento’s directorial debut is self assured and confident, possibly inspired by her famous father. There are odes to his work when Anna gets loopy snorting Special K. The surprisingly crisp storytelling and engaging plot make Scarlet Diva more than a memento for the #MeToo movement. The raw movie isn’t for everyone, but arthouse lovers should seek it out. It is about sexism and misogyny in a messy wrapper. 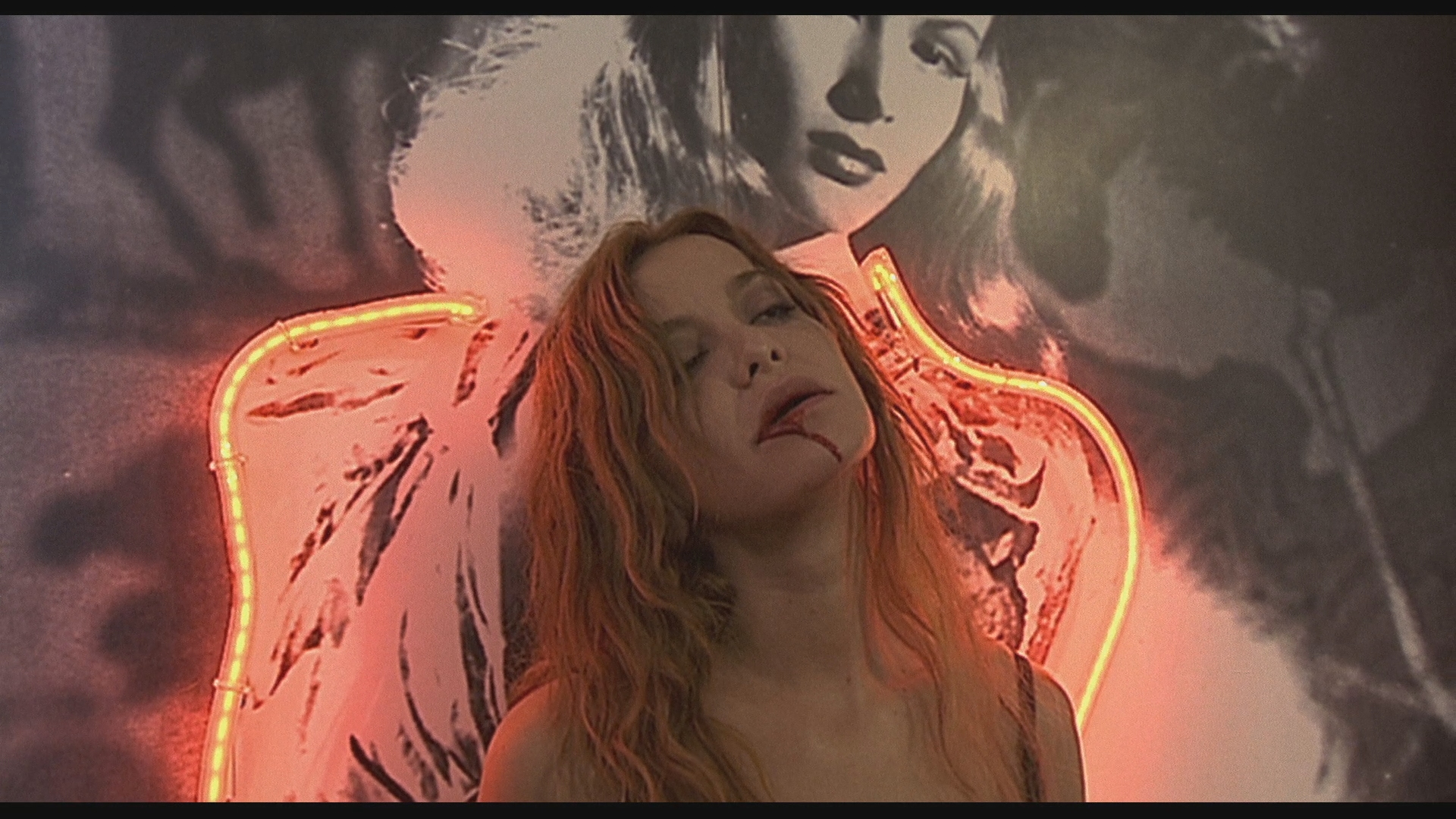 Scarlet Diva was one of the earliest movies shot entirely on digital video, made on Digital BetaCam and mini-DV. It was then transferred frame-by-frame to 35mm film stock. This 1080P Blu-ray presentation has been struck from those 35mm film elements.

Digital video back in 2000 was primitive compared to today, greatly limiting Scarlet Diva’s actual detail and other picture attributes. Film Movement Classics ultimately provides a new digital restoration for Scarlet Diva that is serviceable for the indie production. The film was never going to compete in resolution and picture quality with traditional cinematography.

The main feature runs 90 minutes on a BD-50, encoded in stout AVC. It is presented at the film’s intended 1.85:1 aspect ratio. The best that can be said about Scarlet Diva on Blu-ray is that it’s watchable and shows some improvement over DVD quality.

At various times there is major aliasing from interlaced video, erratic black levels, rampant ISO noise, and other issues that can mostly be traced to its digital video roots. This is fairly poor picture quality if we are being objective. It is soft with a weak contrast and poor shadow delineation. There is little depth or definition. Some of the 35mm film pedigree makes its presence known with obvious debris and gate weave.

The movie’s primary soundtrack has English, French and Italian dialogue. It is heard in adequate 2.0 PCM with a faint stereo mix. There is mild separation. The occasional piece of music has stronger clarity than the nearly monaural dialogue.

Film Movement serves up an excellent edition for Scarlet Diva that fully explains the movie’s unique filmmaking process. But everyone reading this will want to check out the second included commentary, newly recorded this year by Asia Argento herself. It’s quite a performance, as the jaded actress/director unleashes an intensely personal examination of her own directorial debut. Having practically started the #MeToo movement with her public declaration that sleazy producer Harvey Weinstein raped her, it’s surreal to watch Scarlet Diva’s fictional recreation of Argento’s rape as she makes comments.

Arriving in Film Movement’s usual clear Blu-ray case, included inside is a handsome 20-page booklet loaded with production images, film credits and an extended essay by film writer Kier-La Janisse. A couple of the special features have been previously issued on DVD, though the Joe Coleman featurette is completely new.

Asia Argento Original Release Review (16:58 in SD) – A 2004 interview with the writer/director/star herself brought over from the original DVD, covering many of the same topics pertinent to the movie heard in the commentaries.

Making of Scarlet Diva (08:28 in SD) – This archival featurette originally found on the European DVDs offers Claudio Argento and other participants such as the cinematographer discussing using digital video in place of film for the movie. Audio is in Italian with English subtitles.

Looking Into The Eye of the Cyclops With Joe Coleman (08:01 in HD) – A new interview with actor Joe Coleman, who played the sleazy producer character that attempts to rape Anna. Primarily known as a painter, Coleman recounts his performance playing a pseudo-Harvey Weinstein character.

Film Movement Trailers (All in HD) – Six trailers are included, ranging from The Pillow Book to Full Moon In Paris.

Asia Argento Commentary (2004) – Recorded for the original DVD release, writer/director/star Asia Argento is brutally honest in a stream-of-conscious way about her film and state of mind at the time of recording this commentary. She’s clearly hedging a little on some of the more personal revelations, but reveals amazingly intense and emotional stuff. A very interesting listen, especially in light of what we know now about Argento’s allegations against Weinstein. I recommend listening to the 2018 commentary in its place if pressed for time, as both commentaries cover much of the same ground.

Asia Argento Commentary (2018) – This newly recorded audio commentary by Argento for Scarlet Diva is the audio commentary of the year. Having been an actress since an early age, Argento is a natural-born performer and that seeps into this amusing, shocking, witty, and even horrifying commentary. This is raw and unvarnished, revealing information most people would be embarrassed to admit for posterity. She discusses her emerging bisexuality, recounts her hatred of Vincent Gallo, slams an ex-boyfriend, and addresses her terrible memories of Weinstein’s alleged rape.

Scarlet Diva is a bold personal vision by actress and director Asia Argento, now made famous by her allegations against Harvey Weinstein.

The 15 unaltered images below have been taken directly from the actual Blu-ray. For an additional 16 screenshots taken from Scarlet Diva, early access to all screens (plus the 17,000+ already in our library) in full resolution, dozens of exclusive 4K UHD reviews and other perks, support us on Patreon.