Consider too the buddy cop set-up, beyond a cliché by 1987. Two years later Hanks himself parodied the concept with a dog in Turner and Hooch. Dragnet litters itself with corny action scenes, whiffing on the dialog, the latter Dragnet’s best asset. Arguably, this is a movie a little before its time – Addams Family, Flintstones, and other rebooted ‘60s TV wasn’t yet a Hollywood trend.

But, taken as a time capsule, Dragnet’s style has charms. Aykroyd is gold as the nephew of the original Joe Friday, if a bit insulting to the original material by turning this into a screwball comedy. Tom Hanks plays well, pulling Dragnet into a new decade, kicking and screaming into a different morality.

It’s an aware comedy, with a smart cast, just weary as it attempts to emulate the then formula of action cinema

Aside from the ludicrous scene of Aykroyd and Hanks attending the gathering of a cult (and a subsequent brawl with an oversized snake), Dragnet concerns itself with a real world debate. That’s why Dragnet works. At the time of release, it was only one year prior to a first amendment court battle between Hustler owner Larry Flynt and televangelist Jerry Fawell. This too was a time of President Raegan’s anti-porn stance. Dragnet pulls it all together.

So Dragnet isn’t simple or forgettable. It’s an aware comedy, with a smart cast, just weary as it attempts to emulate the then formula of action cinema. Cut out the droning shoot-outs, the punching, and absurd chases (raised to an eye-rolling extreme in the climax), and what’s left is a sharp, well-groomed retelling, set in a culture war that looked to upset those post-WWII ideals. Hanks fits right in, dressed down, casual, and sushi eating. That liberal California setting is all the better still to pull this new Friday toward a new era of thinking, all while dumping a slew of laughs. 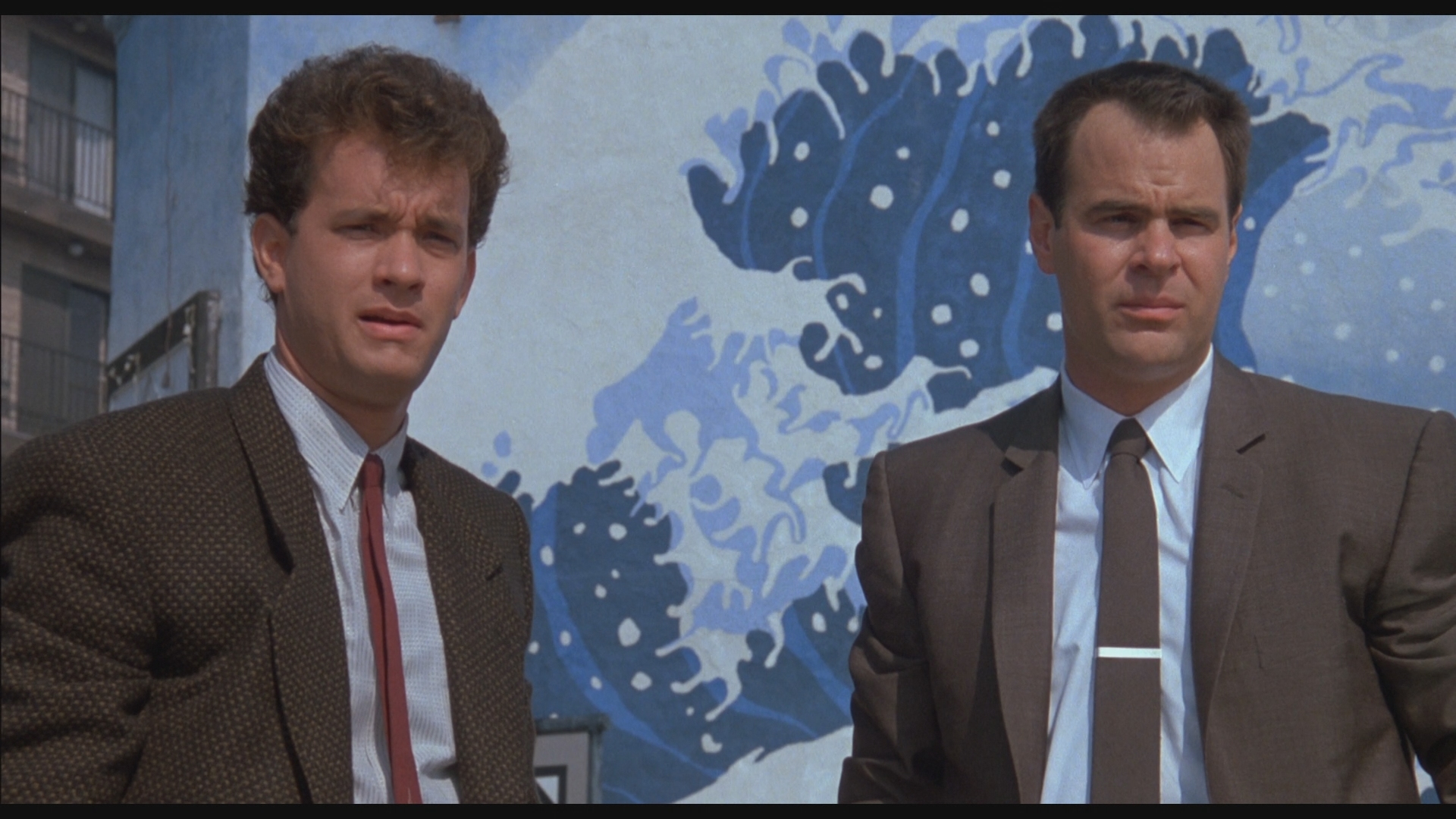 This is the first go-round for Dragnet on Blu-ray. That took a while. Luckily, it all pans out under Shout Factory’s banner, giving this ‘87 feature a clean, new scan with plenty of resolution to go around. Sharpness and detail merge beautifully, resolving the scenery of Los Angeles without fault. Close-ups deliver facial definition, and the texture of Friday’s tailored suits stands out.

Rich color pushes primaries onto the screen. As Friday first stands outside of the police station, various hanging flags showcase a variety of hues. A dress worn by Alexandra Paul is almost blindingly bright and saturated. A great mixture of color imbues the cult rally, including a pink mowhawk on Aykroyd.

Presented in DTS-HD stereo, the channel split is a wide one. The score stretches the soundstage, bouncing between speakers. Action involves gunfire from side-to-side, dressing things up with enough direction for a film this vintage.

Fidelity wavers slightly. Dialog tends to fall and fade in terms of sharpness, although without any damage to audibility. Music doesn’t take a similar hit.

A commentary from pop culture historian/Shout Factory producer Russell Dyball is up first, followed by a new interview with actress Alexandra Paul; she’s quite knowledgeable on the production. Up last is a 45-minute look behind-the-scenes of Dragnet, originally shot as a promo piece for TV in time for the movie. It’s hosted by Aykroyd and Hanks in jovial fashion.

Dan Aykroyd embodies the classic cop of the ’60s, caught in the progressive late ’80s in this fun, relevant take on Dragnet.

The 15 unaltered images below represent the Blu-ray. For an additional 17 Dragnet screenshots, early access to all screens (plus the 17,000+ already in our library), 50+ exclusive 4K UHD reviews, and more, support us on Patreon.