By the time Dwayne Johnson is fighting with a samurai sword, Skyscraper already destroyed its credibility. What’s a sword against gun-happy terrorists when Johnson already climbed the burning building using only duct tape? But not only is this summer blockbuster a drain on escapist fantasies, it’s outright dull, and so desperate for a finish, it comes up with a nonsense, all-digital hall of mirrors.

Read our full review of Skyscraper for more.

Although a 2K source, Skyscraper’s style earns the UHD some stars. Primarily set at night against the Hong Kong skyline, Skyscraper is a sea of fire and neon against a perfectly black skyline. It’s gorgeous, pushing Dolby Vision to its peak. Sensational, dense black levels keep imagery weighty. Bright lights sear onto the screen in powerful contrast. All of the fire creates constant highlights.

A digital grain filter layers over the image. Universal’s encode resolves this well. It’s controlled without jumping around in intensity.

While bathed in fire and orange, Skyscraper isn’t without color or saturation. Flesh tones maintain a neutral state where possible. Blue strips of light around the building beam with intensity. Police cars light up with gorgeous brightness. 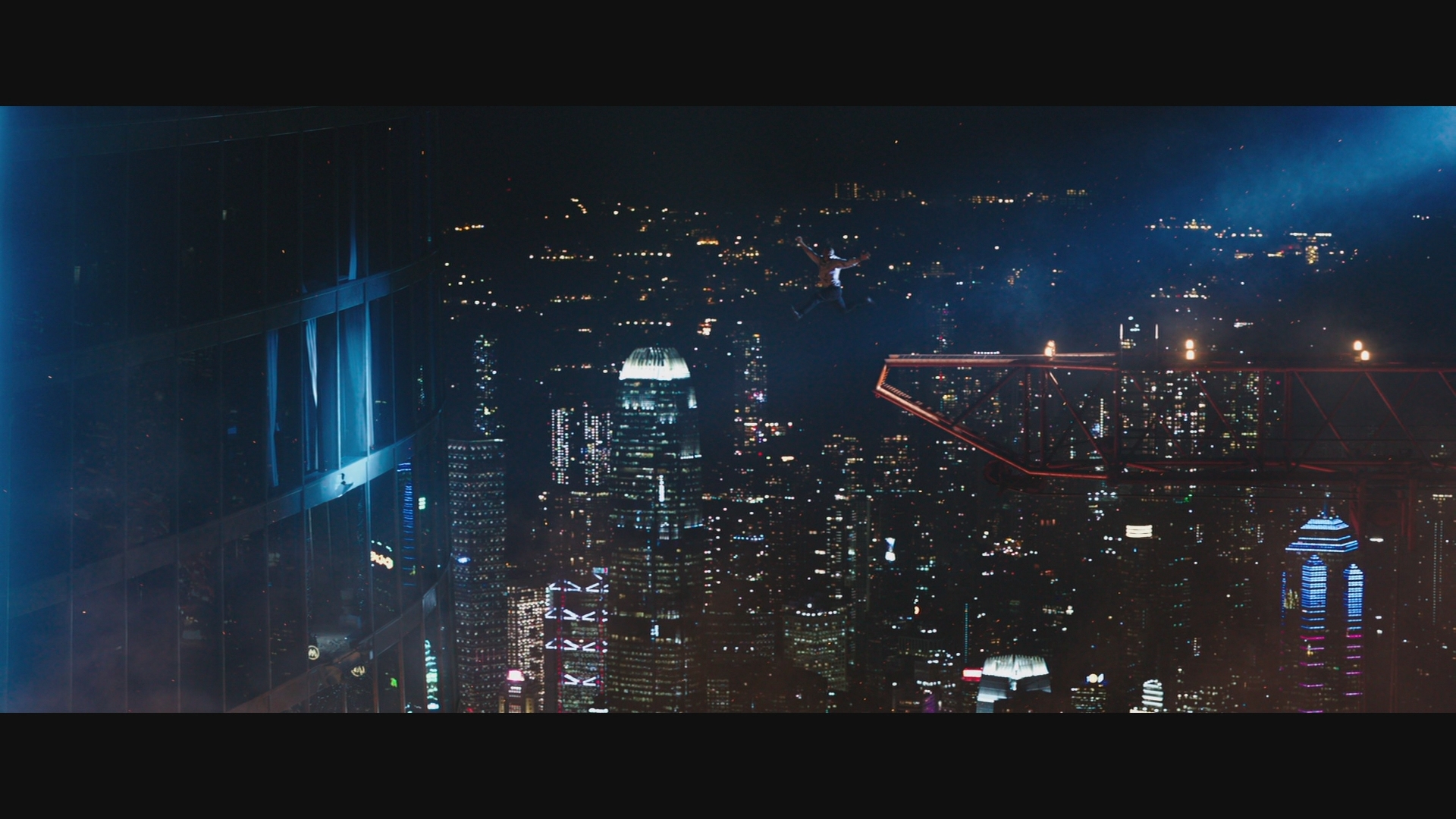 Deep black levels do cause some crush on Blu-ray. During the finale inside the sphere, dimension wanes as shadows take a hit. Shadow density retains strength though, solid and heavy with plenty of rich black to go around. This creates powerful contrast against the fire-laced backdrops.

Encoding can more than handle an artificial grain structure. Behind that is splendid fidelity and consistent sharpness. Facial definition rates highly, and exteriors show off Hong Kong. Bright, saturated color only enhances things.

Dolby Atmos is the chosen format for both of Skyscraper’s home video formats. This is an enthusiastic mix, wrapping flames around the soundstage. While Johnson clings to the building exterior, a split between fire and exterior wind mixes well to keep up the danger. Gunfire spreads wide when used.

Powerful dynamics keep a persistent roar active on the low-end. While strong, this doesn’t over take the soundstage. The best LFE use comes during a helicopter crash, roaring overhead with tremendous subwoofer support. That sequence – literally – feels enormous; the room shake ignores subtly, choosing to employ the summer blockbuster mantra of beefy, bold sound.

Director Rawson Marshall Thurber is everywhere in the bonus menu, beginning with his solo commentary track. He presides (optionally) over five deleted and five extended scenes, around 22-minutes total. Six featurettes follow, all short EPK fluff, except for one that focuses on the inspiration for Skyscraper’s amputee protagonist.

The 15 unaltered images below represent the Blu-ray. For an additional 17 Skyscraper screenshots, early access to all screens (plus the 17,000+ already in our library), 50+ exclusive 4K UHD reviews, and more, support us on Patreon.