You Came and You Gave

MTV debuted in 1981. Mandy takes place in 1983. By Mandy’s account then, it was two years until a 24/7 cycle of Black Sabbath and Motley Crue corrupted youth, enough for a conservative right to act.

That’s the set-up here in a film enamored with music video culture. Most of Mandy’s frames appear pulled from a music video, slowly filling or passing the frame, with eclectic lighting schemes behind them. Erratic color drenches Mandy in drug-induced psychosis.

Mandy is as weird as it is angry. The violence sprouts from a place of revenge, that revenge spurred on by religious belief that turns deadly. In terms of a generation gap, Mandy lashes out at those who take their inability to understand evolving pop culture to extremes. Here, that hatred is taken further than letter writing campaigns – the Christian cult in Mandy burns Red’s (Nicolas Cage) wife alive. She dared reject the cult leader and chooses to wear metal band t-shirts. She probably watched MTV too.

Red is an oddity, a lumberjack and blacksmith, in a performance that like most of Cage’s recent work, is destined for meme-dom. In the middle of a deadly struggle with a black-clad demon, Cage screams, “You ripped my shirt!,” this coming after a drunken, frustrated screaming session inside of a bathroom decorated in the ‘70s. It’s wild.

For Mandy though, this is all appropriate. The shouting, the crying, the outlandish; Mandy absorbs division, then spills everything in a bizarrely violent rampage. Mandy only offers two acts. In the first, Red and Mandy (Andrea Riseborough) live a routine life, intriguingly slow, even monotonous. That’s necessary to establish a sense of stability. After Mandy is kidnapped and killed, it’s every bit the sensationally raw and visually demanding grindhouse flick. Chainsaw fights and skulls smashed by bare hands – every death makes up a piece of a heavy metal album cover.

Animation is used in a manner of depicting dreams. Cartoonish levels of blood spurt from wounds. Wild, acidic color bathes characters in their hallucinations. Yes, there is LSD involved in this story. Whether the same was true during production or not isn’t known. But probably.

Mandy is certain to live on in cult cinema circles. It’s too distinctive and surreal not to. Plus, there’s the rebellious undercurrent against a conservative society, pushed into place with the wrappings of nostalgia. There’s Nicolas Cage too, more than willing to stand in front of the camera in underwear, watching a TV commercial about a mac & cheese vomiting demon. Most of Mandy relies on a daze. Likely, that’s where Mandy will leave much of its audience. 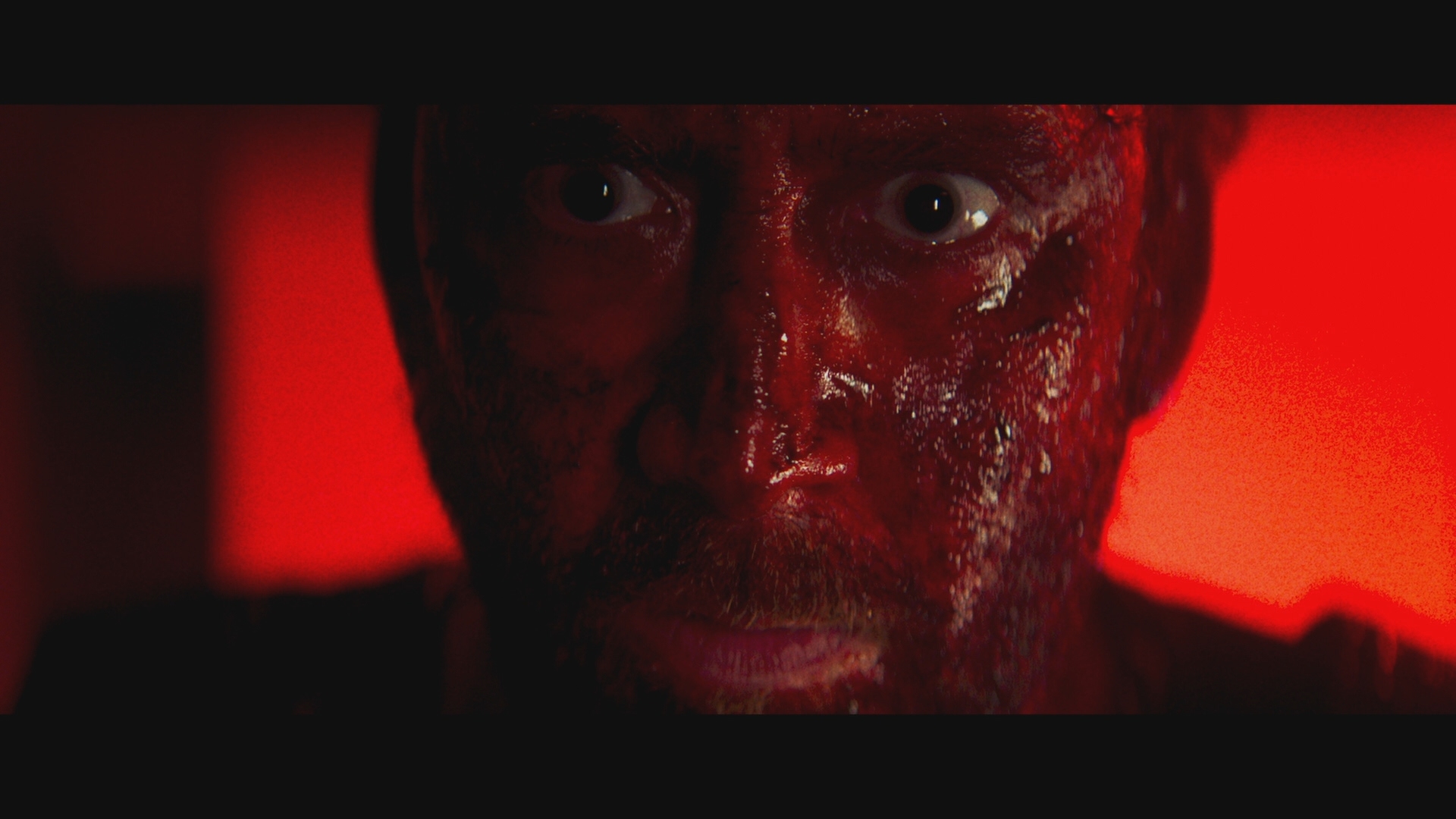 RLJ issues Mandy to Blu-ray and well, Mandy doesn’t look like anything else. It’s digitally lensed, but looks like 16mm. Then, clean digital. Then again, low-res, chunky, and noise-filled slop. None of this falls at the feet of this Blu-ray.

Sometimes Mandy uses blacks. While it’s crushed by way of heavy contrasting light, at least Mandy shows signs of dimension. Most of the way through, shadows turn to blue, creating a psychedelic mix of color. Red is quite popular. At times, the entire screen is nothing but red. Kudos to the encode for not introducing any errant compression artifacts or banding considering.

Late close-ups of Cage covered in blood and cuts do show an excellent eye for detail. Texture shines and glistens in the surreal lighting set-ups. Sharpness is rejected for stylistic softness. That look of a hazy ‘80s music video continues throughout Mandy.

Despite a wild visual space, the audio stays subdued. Dynamic range is low, and channel separation delivers music more than discrete effects (save for Cage whipping a chain around his head; that sweeps through each speaker).

Well balanced dialog sits firmly in the center. That manages to capture even the softer monologues, in sync with the wilder action sequences.

Destined for high-end cult status, Mandy’s surreal explosion of violence breaks through the ’80s culture war in a distinctive way.

The 15 unaltered images below represent the Blu-ray. For an additional 30 Mandy screenshots, early access to all screens (plus the 17,000+ already in our library), 50+ exclusive 4K UHD reviews, and more, support us on Patreon.