Linda Blair and Richard Burton Confront Pazuzu in This Flop

How do you follow up what many consider the greatest horror movie of all time and also one of the seminal movie events of the 1970s? For director John Boorman in the oddly subtitled Exorcist II: The Heretic, his answer is locusts and a script that all but undercuts everything that was loved about The Exorcist. Did I mention the locusts? There are lots and lots of locusts.

Despite a star-studded cast and the return of actress Linda Blair, The Exorcist’s first sequel has always been polarizing. And by polarizing, what I mean is a great, great disappointment. Exorcist II: The Heretic remains one of cinema’s great failures as a sequel. Fans today look towards William Peter Blatty’s The Exorcist III as a more proper sequel. The studio cut William Peter Blatty out of Exorcist II’s creation and his absence is direly felt in its confused plotting and strange story choices.

The first warning sign about Exorcist II: The Heretic is that it destroys the classic ending to The Exorcist, when Father Karras and Father Merrin sacrificed their lives to free the young Regan (Linda Blair) from demon possession. Four years after those dark events, the demon Pazuzu has returned once more to trouble Regan, now a young woman living on her own with one of her mother’s assistants (Kitty Winn). What did those priests die for if the demon could return just a few years later?

Attempting to help Regan is Dr. Gene Tuskin (Louise Fletcher), some sort of special-needs therapist that believes in memory regression and exotic hypnosis techniques. She’s portrayed as the skeptical scientist, a juxtaposition to Father Lamont (Richard Burton). Father Lamont has been sent by the Vatican to investigate what really happened during the events of Regan’s exorcism.

Few expenses were spared producing Exorcist II: The Heretic. Lavish production values and cutting-edge effects for the time can’t make up for the poor writing and direction. The cast includes the return of Father Merrin in flashbacks, still played by Max von Sydow. Paul Henreid and James Earl Jones also appear. They got Ennio Morricone to provide the score. However, almost nothing gels like it did in the original Exorcist. Richard Burton’s commanding presence is badly wasted as Father Lamont. He simply wasn’t the right choice for the role. Burton’s bull-in-the-china-shop approach to acting offers almost no nuance or sensitivity in this case, overwhelming his decidedly more timid co-stars.

Much of Exorcist II’s slap-dash and harried plot revolves around this bizarre mythology created wholesale specifically for this movie. It grafts new-age spiritualism onto The Exorcist’s Catholic worldview. It attempts to retcon much of Father Merrin’s backstory and his early confrontation with the demon Pazuzu in Africa. This undercuts much of the original’s power and sincere approach towards demon possession.

Ultimately, that is why Boorman’s conception of The Exorcist and its themes are fundamentally flawed. It’s telling when Boorman reveals in the accompanying audio commentary that he passed on the first film because he felt the novel was abhorrent. This was a paycheck for the director and nothing more.

For movie lovers that hold the original Exorcist in high regard, this sequel is a failure. Exorcist II: The Heretic does have some fans for its hokey African scenes and decent effects, but everything else is a miss. It simply lacks the authenticity and drama that made The Exorcist one of the most powerful films ever made. 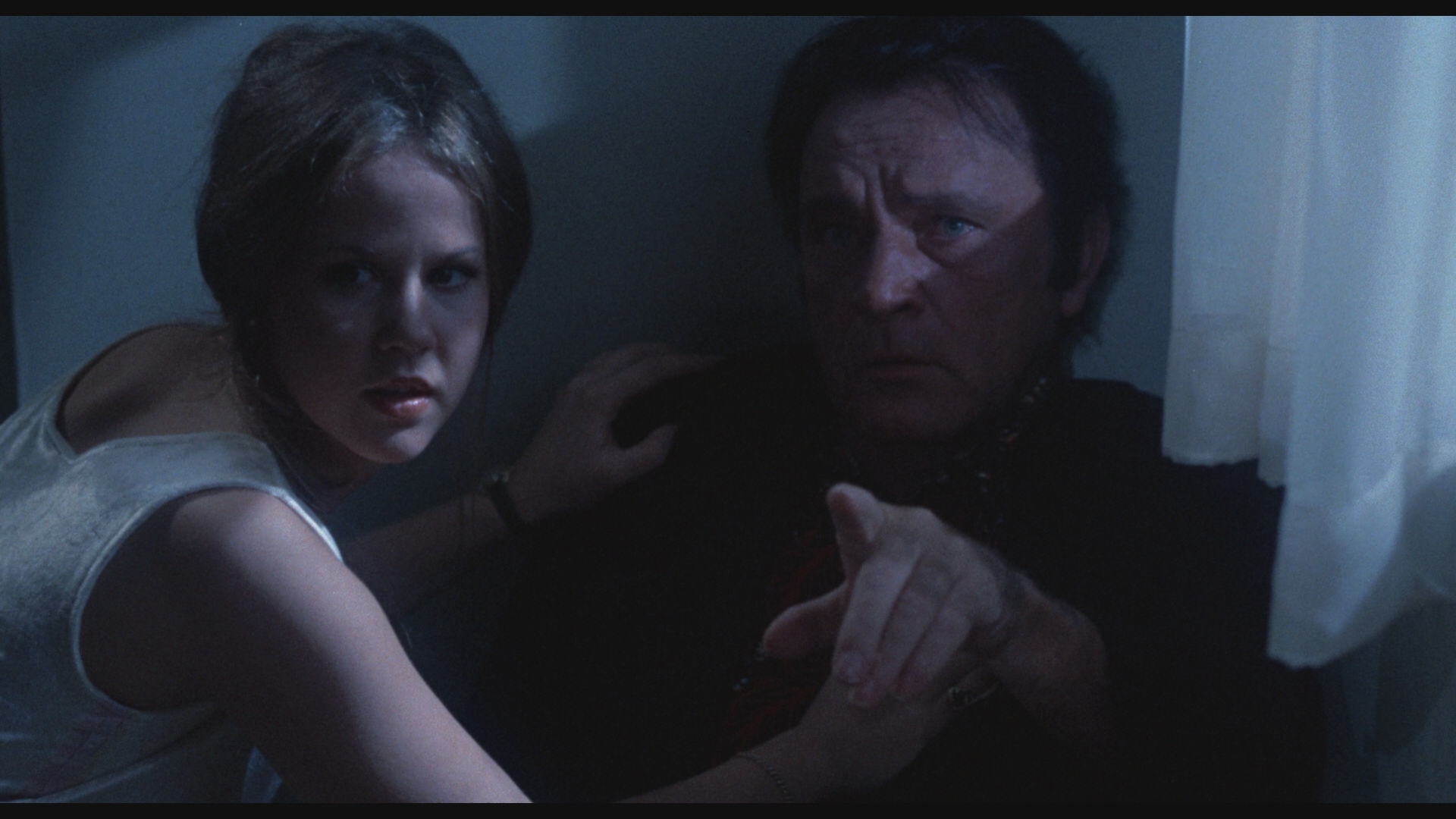 Scream Factory has included two separate versions of the movie. There is the original version of Exorcist II, running 117 minutes. For nostalgia-minded fans, the shorter and mildly different VHS cut at 102 minutes is also included. The VHS version has an added flashback and stock footage of a possessed Regan, since Linda Blair refused to appear as the demon again. This link explains the differences in minute detail. The original WB Blu-ray only contained the original 117-minute version. This made-for-VHS alternative cut is interesting but more a curiosity for older fans than anything else.

Both cuts have received new 2018 film transfers in 2K resolution. They are shown in the movie’s intended 1.85:1 aspect ratio. Licensed from WB, their well-known MPI mastering facility struck the transfer from the original camera negative. Each cut gets its own BD-50, beautifully compressed in high-bitrate AVC. There were compression anomalies when this movie first hit BD, but its dense grain structure and diffuse cinematography are fluidly rendered by this first-rate compression job. It is a massive improvement and reason enough to recommend the upgrade by itself.

Exorcist II’s cinematography by William Fraker doesn’t pop with clarity or sharpness. The soft visuals and muddy highlights are endemic to the source material. This new transfer allows the movie to breathe with film-like consistency. A distinct lack of processing is quite obvious, though detail remains fairly timid. Released in 1977, soft-focus and almost gauzy cinematography were all the rage at the time in Hollywood. Think Superman: The Movie, more than the crystal-clear and razor-sharp movies that dominated the 1960s.

Scream Factory’s collector’s edition is now the definitive presentation for Exorcist II: The Heretic. It blows away any prior edition in definition. The movie still isn’t much of a looker due to optical effects and other issues, but it’s about time we got a completely film-like presentation on home video.

Both cuts are accompanied with 2.0 DTS-HD MA audio, with the movie’s original monaural mix. The score by master film composer Ennio Morricone is surprisingly dull and has nothing on the original Exorcist’s haunting score. He attempts to incorporate a few African notes into the horror score, which plainly does not work. It is one of the poorer efforts in the composer’s career.

Exorcist II: The Heretic was a big-budget Hollywood production in its day and the mono mix offers robust, full sound. Dialogue is precise, intelligibly presented in the soundstage. There is an active bass presence and the sound design is excellent in the African scenes. It lacks the theatricality of modern horror mixes capable of offering an immersive surround experience.

Optional English SDH subtitles are provided for both cuts. No foreign-language dubs are included. If you are looking for a larger array of foreign subtitles and dubs, the original WB release offers them in spades. It’s the one area in which this Scream Factory set is a downgrade.

Scream Factory’s excellent collector’s edition helps reveal why Exorcist II: The Heretic didn’t work out in a full set of brand-new special features. The previous WB Blu-ray was basically barebones, only including the two trailers also included here, and an alternate opening found on the original home video cut. We get three separate commentaries, all new, and an eye-opening interview with Linda Blair as the headline features.

First pressings include a cardboard slipcover. The two-disc set includes the original home video cut, which hadn’t seen the light of day on Blu-ray before this release.

Interview With Actress Linda Blair (19:16 in HD) – One of the most revealing and fascinating interviews I’ve ever seen from a movie’s star. This new interview provides a key glimpse into director John Boorman’s odd approach to the Exorcist. Linda delves into working with Richard Burton, explaining she immediately jumped at an Exorcist sequel when they got him on the project. She recalls her experiences with the locusts. The most critical reveal is how she refused to film certain “offensive” scenes with Richard Burton’s character, namely the demon seducing his character with Regan’s body. Boorman had to work around Blair’s refusals to go along with that story-line.

Interview With Editor Tom Priestley (06:57 in HD) – The elderly editor gives this new interview recounting his work on the movie and working alongside Boorman.

Audio Commentary On The Original Home Video Cut – Mike White of The Projection Booth blog and podcast provides this new solo commentary, packed with trivia and nuggets of information. It’s a smooth, informed dialogue worth hearing for discerning fans.

Audio Commentary With Director John Boorman – This new audio commentary covers the original, longer cut of the film. Boorman opens the commentary discussing his interesting history with The Exorcist. Warner had apparently offered him the job of directing the first one and read the novel, which he found abhorrent. After the first movie had become a huge hit, he changed his mind. That more or less explains why this movie turned out to be a disaster – he didn’t enjoy the source material. Then he largely goes scene to scene, covering the usual subjects.

Audio Commentary With Special Project Consultant Scott Michael Bosco – Another new commentary for the longer original cut. Bosco is no stranger to audio commentaries, having appeared on several prior DVD and Blu-ray commentaries for other films. This is a solid discussion that touches on a variety of interesting subjects.

Widely considered one of the worst sequels in movie history, this new collector’s edition helps explain why Exorcist II is such a mess.

The 15 unaltered images below have been taken directly from the actual Blu-ray. For an additional 22 screenshots taken from Exorcist II, early access to all screens (plus the 17,000+ already in our library) in full resolution, dozens of exclusive 4K UHD reviews and other goodies, support us on Patreon.