Twelve Monkey’s first act takes place in one “those” movie mental hospitals. Oil-based paint is drying and cracking on the walls. Patients rock back and forth over puzzles and board games. Some of them grab at the air. All of the doctors rush at those out of control, ready to knock out the unruly with various drugs. There’s little actual psychiatry.

All of that fits Twelve Monkeys however. Ignore the cliché – it’s a fatalist film where people exist only to harm one another. It’s never clear who the hero is either. “We decide what’s right, what’s crazy or not,” says Kathryn (Madeleine Stowe) in Twelve Monkey’s prominent line. Maybe Bruce Willis, the possible hero, is from the future to stop the release of a killer virus from a terrorist group, as he says. Or, he kills people because he’s legitimately unhinged. The ambiguity is Twelve Monkey’s greatest trait.

Wrapped in a time traveling, seedy sci-fi movie is director Terry Gilliam’s look at psychosis and how we define “crazy.” People fear the toothless homeless man who approaches them on the street speaking about the death of five billion people. That man is meant to be institutionalized. But what if he’s right?

… this isn’t a movie about a virus or time travel – it’s about people, and how actions of others define us

So strong is the belief in a killer virus, even an otherwise stable psychiatrist begins to believe. Kathryn embraces her patient James Cole (Willis). They each consider the possibility of their mental statuses, twisted and conflicting as they begin to reverse roles. Cole accepts his mania; Kathryn then supports it.

A fan theory exists that says none of Twelve Monkeys’ sci-fi happens. Cole is indeed ill. Twelve Monkeys draws a number of visual correlations between an overdressed, surreal future and the murky modern day. Five scientists charge Cole with the task of investigating the past, five doctors interrogate him when he arrives. Movies offer their own truth, not coincidences. It’s possible the future prison that holds Cole is a manifestation of his own mind. How clever this movie is.

In the final shot, a small child stares up at the sky, in shock after witnessing a murder. That’s designed as Twelve Monkeys’ seemingly de facto finish. That kid is Cole, not yet a teen, and traumatized. Here begins his mental ills, the igniter that comes to define a life depressed. Cole comes back to this point in his mind. The events play out in his dreams, inescapable, much like the prison he’s held in come 2035. That, or it’s the same rotting mental hospital seen from a mind incapable of processing the reality. After all, this isn’t a movie about a virus or time travel – it’s about people, and how actions of others define us. For one small kid, those actions lead to a lifelong loss of stability. 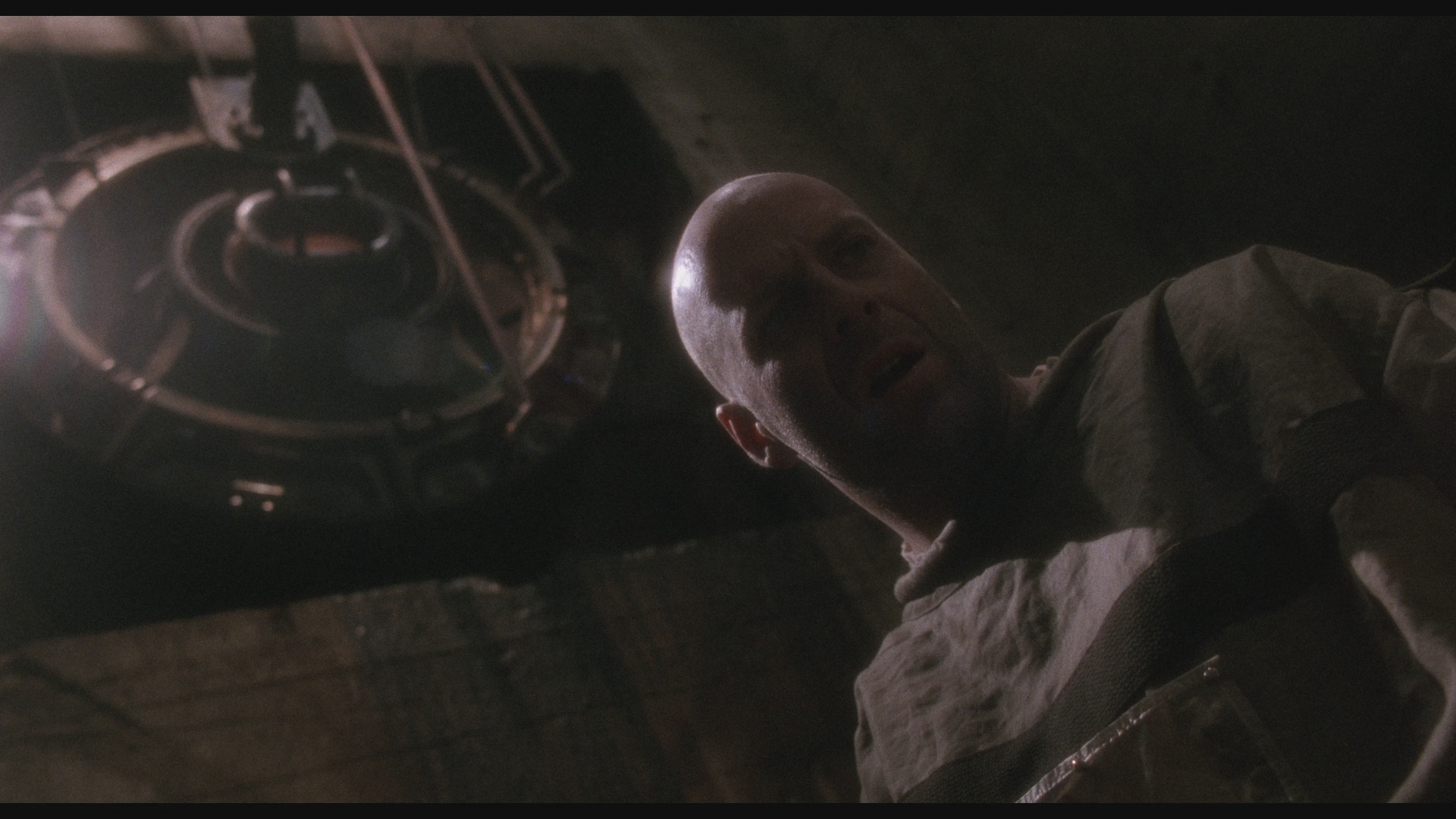 Arrow provides a new 4K scan for Twelve Monkeys. That comes from a source rich in grain thickness, at times veering toward the weight of 16mm. Compression work is ample, resolving the film source with grace and as much clarity as seems possible.

Detail in the production design, especially in the tinkerers paradise of the future, defines all of the minutiae used to decorate the sets. Close-ups score with facial definition. City scenery shows off, resolving texture on buildings.

The softer, flat lensing used in the cinematography appreciates a dreamy, hazy look. That does impact fine detail, but to an attractive degree. Twelve Monkeys’ distinctive appearance is preserved in full via this new, clean master.

Flat coloring thrives in areas of overcast. Twelve Monkeys avoids strong primaries, jumping toward rustic orange when in the underground future, but still reductive in terms of this palette. Flesh tones look dry and pale, fitting to the tone.

Voices swirl around Cole at multiple points of Twelve Monkeys. Those discreetly jump from channel to channel, adding to the sense of mania. One brief scene takes place in WWI, where bullets and mortar shells sweep about the soundstage. That’s a high point of this DTS-HD work.

Minor ambiance fills crowded locations such as airports. It’s fine, if not standing out. Fidelity isn’t lost over the 23 years since the initial release. Dialog jumps from the center without fault, and nicely balanced. Range is a bit pithy, lacking LFE force even in scenes that call for it.

Terry Gilliam and producer Charles Roven join for a commentary track, this followed by the stellar The Hamster Factor, a near 90-minute making-of with spectacular footage from the time of production. This is followed by a 23-minute interview with Gilliam from a screening in 1996. Author Ian Christie provides an appreciation for the film, speaking for 16-minutes. Finally, an archive of art and pre-production materials contains all manner of pieces, albeit in low resolution. These look pulled from a Laserdisc.

Terry Gilliam’s sci-fi film Twelve Monkeys is a swerve, less about time travel and killer viruses than it is how we interpert sanity.

The 15 unaltered images below represent the Blu-ray. For an additional 22 Twelve Monkeys screenshots, early access to all screens (plus the 17,000+ already in our library), 50+ exclusive 4K UHD reviews, and more, support us on Patreon.