Danny McBride is meant to play an idiot in Arizona. Set at the beginning of the recession, McBride is turned into an American consumer satire, an SUV-driving, divorced dolt who bought a house he couldn’t afford in a pop-up gated community that also, no one can afford to build. He runs a ludicrous small business – American Wice – which is wine ice so wine doesn’t get watered down by regular ice. In McBride’s closet, he hides a small arsenal of guns. As it turns out, he’s pretty sensitive about his masculinity.

Arizona is designed as one of those dark comedies where there’s an accidental murder and a moron panics, killing more people as the cover-up turns increasingly absurd. It’s a little too soon. Arizona begins with an attempted suicide by hanging as a homeowner can’t get out from under his mortgage. There’s no real humor there. Most of Arizona falls toward a cruel crassness.

Rather than funny, Arizona is outright angry. McBride stars as the villain, yet it’s filled with dopey ex-husbands who ditched their wives for trophy women, shrewd real estate agents who lied their way into sales, and a threatening collections call from a woman promising murder if a six-month overdue mortgage isn’t paid. Everyone involved is a villain. With only a hint of subtly, Arizona might find its way into a searing satire of American consumerism. Instead, it only finds a body count.

If McBride is the average dorky American – bad tan, guns, and golf clubs – he’s an also an abuser. That’s the scary part of Arizona, that no one involved seemed to catch the way McBride exudes the methods of abusive men. One second he’s kind, the next he snaps and begins hitting women. Arizona’s an uncomfortable take on Stockholm Syndrome with the audience afflicted, where one second McBride’s doofish antics play for laughs, then the next he’s murdering people. Laugh/don’t laugh; intent isn’t clear.

In McBride’s grasp is Rosemarie DeWitt. He kidnapped her after she witnessed a murder. Before long, Arizona shifts to a creepy stalker/slasher dynamic where DeWitt wanders a community in her bra while McBride shoots at her. What a bizarre turn this movie takes. Better than this material, DeWitt outsmarts her captor, a sort of absurd spin on what it takes to overcome the financial crisis (DeWitt struggles similarly with her mortgage), yet there’s no outcome. By the end of Arizona, DeWitt is going home to a house nearing foreclosure. As it turns out, the time period is merely a catalyst turned window dressing. All that remains is a tedious and grueling pseudo-comedy/thriller. 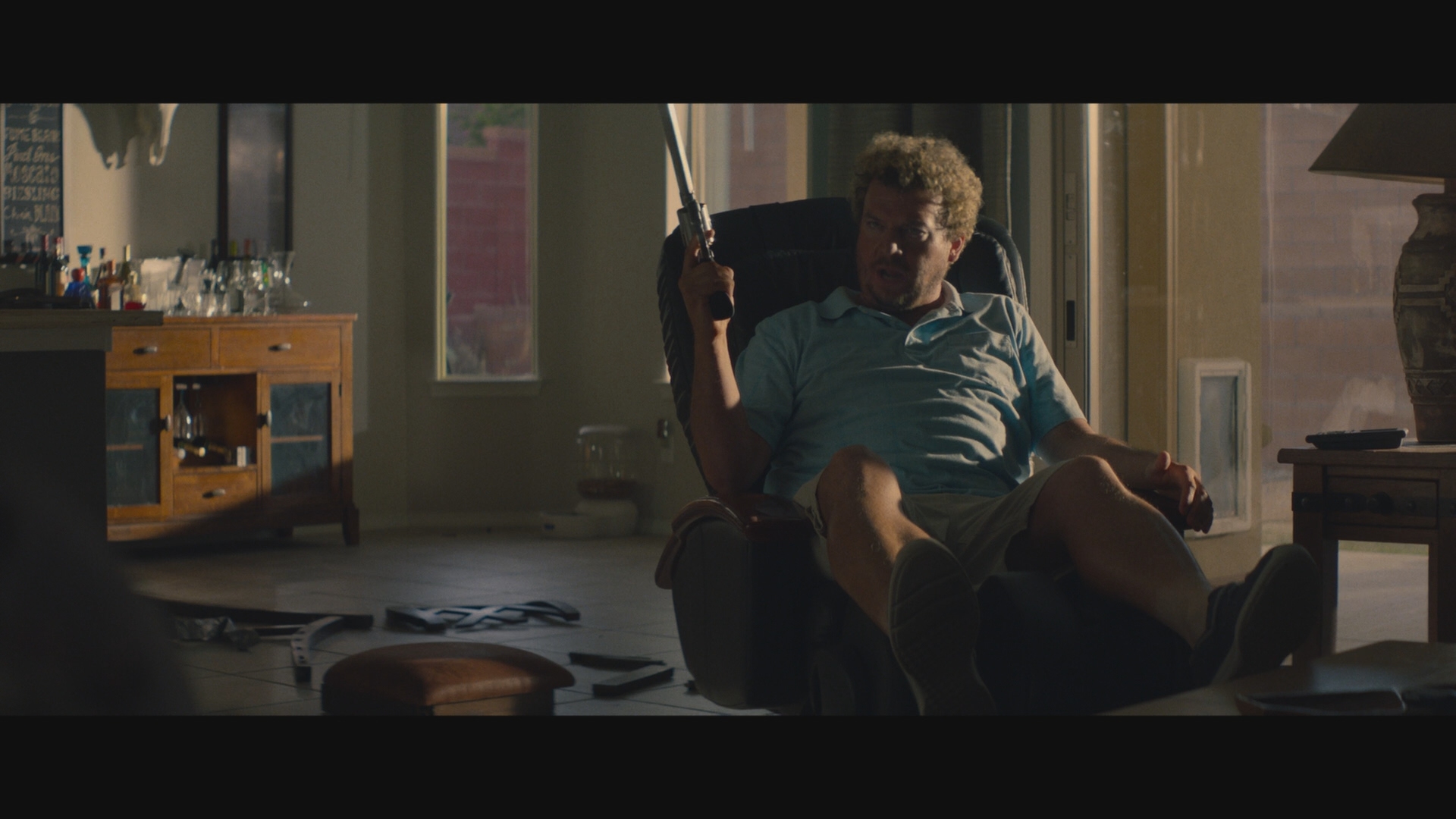 The HDR pass for Arizona is certainly a subtle one. Contrast stays generally flat, missing extremes on both ends. That’s especially apparent during the nighttime-draped third act. Black levels veer away from pure black, and the various flashlights in use lack intensity. Prior, the shots of western sunsets follow the same pattern. There’s not much zip here.

A wealth of orange takes over the scenery, warming the palette. Minor touches from other primaries bring a little balance into the mix. Density is strong. Flesh tones skew toward a heavy orange. It’s not attractive, rather excessive.

Overall resolution sags. Between the two formats, the level of detail and sharpness is equal. Arizona, at best, comes from a 2K finish of a 35mm source. A slight veneer of grain resolves easily, compression parameters slightly better on UHD. Only the most hardened videophiles will detect the differences.

Other issues bring the disc down. The lack of resolution is visible from the outset. Definition sours. Black levels falter, seemingly impacted by the glaze of orange laid over the image. Contrast reaches an adequate tier for this format.

Only a few thrills line this attempted thriller. Those come primarily from gunshots. Given the open air setting, their sounds reverb into the surrounds. It’s a clean transition, shifting from the initial blast in the center, then outward.

Both formats send out the same DTS-HD 5.1 mix, limited in scope by the material. Some bass slips in during a loud soundtrack moment, laying out Arizona’s possible range. It’s strong stuff, with mighty subwoofer support.

An EPK that recounts Arizona’s plot masquerades as a making of. Skip it, and if interested, view the photo gallery that follows. There’s nothing else to look at.

Meant as a satire of the 2008 recession, Arizona instead turns into an uncomfortable movie about a kidnapping that turns into a slasher movie.

The 15 unaltered images below represent the Blu-ray. For an additional nine Arizona screenshots, early access to all screens (plus the 17,000+ already in our library), 50+ exclusive 4K UHD reviews, and more, support us on Patreon.