Solo is a singular opportunity to explain everything about Han Solo. So, it does. Star Wars fans see, for the first time, what the Kessel run was as mentioned in A New Hope. Fan hear where Han’s last name originated; it’s not a family legacy. For years it was known how Han won the vaunted Millennium Falcon. Now, it’s acted out.

It’s hard to see Solo as anything less than fan service, trotting out tropes and familiar routines. There’s a train heist out of a western, where a character dangles perilously off the side as an object rushes toward their face. A battle with Imperial Tie Fighters uses the typical loop-de-loops and hyperspace maneuvers. Shoot-outs stand-out only for their familiarity.

In the background of Solo’s production, trouble ensued. How, what, when, etc. remain with the tabloids to speculate, but a change in director and near total reshoot birthed the finished film. Solo is then an after effect where strong casting is punished by IP holder Disney refusing to do anything other than play safe. Star Wars is too precious to let go.

… it’s a movie of disconnected firsts without narrative onus

The spark of something interesting peeks through. Han (Alden Ehrenreich) joins the Empire, led into World War I-esque battlefields. His own belligerence notes the Empire is the invading force, not the other way around. There’s a droid too, sourly named L3-37 (Phoebe Waller-Bridge), who incites a droid uprising against their human oppressors. It’s as adorable as it is potent. The fringes of Rebellion against the Empire begin to seed, an interesting story tossed aside as Solo moves toward the typical Star Wars routine.

Nothing in Solo develops Han beyond Harrison Ford’s own take, although credit to Ehrenreich for his pinpoint portrayal. Solo turns into a series of moments; Han meets Chewie for the first time; Han meets Lando (Donald Glover); Han see the Falcon; Han pilots the Falcon; Han’s first smuggle run; it’s a movie of disconnected firsts without narrative onus. Funny too how these universe-significant events happened in such short order.

The use of practical effects is admirable and successful. Humor often factors in to lighten the dramatic vibe. Space battles and lasers feature prominently. Even the score works, with small flourishes from John Williams. This is certainly a part of Star Wars canon. Solo becomes the rare case where initial impressions proved right though – Star Wars didn’t need Solo. It’s neither an expansion of lore or a successful stand-alone. 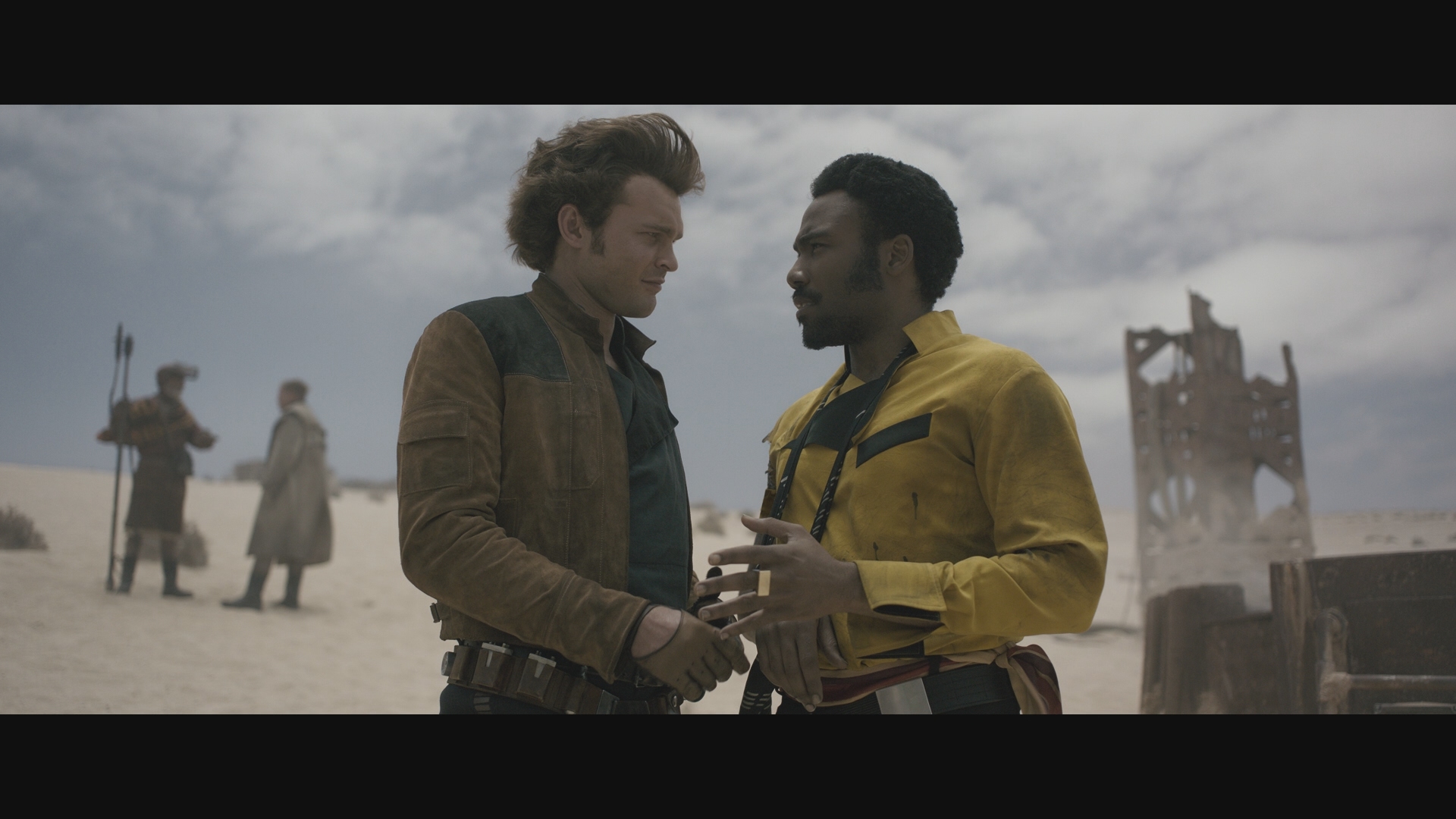 Solo is an interesting case study in HDR and aesthetics. Black is never part of this movie. The goal is a vintage veneer, glazed in ambers and browns with little or no dimension. Shadows take on either a rusty or blue appearance, invalidating the potential of HDR. At times, Solo is difficult to see, a murky, monochrome slate of color with limited visibility. Back lighting dominates.

Prominent highlights factor in. Sparks stand out from the dry backgrounds as do explosions. Plus, the various suns add blinding lens flares to the screen. That’s where HDR helps.

From a 4K source, the limitations of a dress down post-production erode the sharpness and fidelity of such material. Until landing on a beachside location well into the third act, hardly any genuine fine detail appears. Solo’s washed out design takes away any sense of vibrancy.

Credit goes to Disney’s encode for maintaining total clarity. Even with the lack of shadows, no noise seeps into the darker portions of the frame. When allowed, color strikes with vivid saturation. The Maelstrom scene, veering between a kaleidoscopic mess of debris and into a gravity well make up Solo’s high point visually.

Unlike the UHD, the Blu-ray edition can’t keep up with the clarity. A bit of noise and banding slips into the shadows, giving Solo an imprecise quality. Overall impact is negligible, but a notable dip.

The two formats maintain roughly equal footing in terms of depth given the choices made in post. A dusty veil hangs over Solo. That’s the look and what the disc represents. When color escapes, it’s often splendid.

Atmos provides plenty of sonic energy, if mixed low yet again as with most of Disney’s output lately. No worries after a bit of volume correction – a few moments of bass push Solo into a top tier. A massive fuel explosion rivals anything from say, the Transformers discs. It’s an incredible, air sucking blast. Ship engines register with force, and an early war sequence features a stream of consistent explosions.

Active fights and chases keep a torrent of material passing between channels. Lasers sweep by as do vehicles. A mesmerizing space battle with Tie Fighters sends screeching sounds discreetly between speakers.

Disney includes an extra bonus disc, but note no mention is made of the production trouble anywhere. Ron Howard mediates a roundtable discussion with the cast, running 21-minutes with plenty of fun anecdotes. Kasdan on Kasdan discusses the writer/producer’s influence on the project. Fans of the Millennium Falcon get to look at the design process for five minutes. Team Chewie looks how the role is played and how careful Joonas Suotamo acted out the part.

Four featurettes look into key action scenes individually, each unique but far too short at only a few minutes a piece. Eight deleted scenes finish things off, running 15-minutes.

Solo goes through the motions and tries to cram every bit of possible fan service into a two hour meandering story.

The 15 unaltered images below represent the Blu-ray. For an additional 35 Solo screenshots, early access to all screens (plus the 15,000+ already in our library), 50+ exclusive 4K UHD reviews, and more, support us on Patreon.