Keeping It in the Family

The target for Ocean’s 8 is perfect: Smug, pompous rich people gathered for the Met Gala. No one will blame a group of professional scam artists for ripping off the most conceited in American society.

Taking the chance is Debbie Ocean (Sandra Bullock), sister of Danny Ocean, although Ocean’s Sister doesn’t have the same ring. It’s a sassier take on the Ocean’s formula, again well-cast and well-dressed, with an intelligently composed heist at the climax; also, a satisfying one as a glam, egotistical movie star (Anne Hathaway) is played for a fool.

Ocean’s 8’s goal is a diamond necklace ($150 million worth) that to the people attending the Gala is pocket change. Those snatching the jewels don’t quite fit the aesthetic. Each comes from a different part of society, from a low-income computer hacker to a down-and-out fashion designer. There’s a soccer mom too, with her garage full of stolen goods. For Ocean’s 8, that means a garage full of product placement.

The newly formed crew deal in dresses, shoes, and make-up to an alarming saturation

All of the pieces match – a heist flick with a stand-out cast, eventually dressed for the job with a clean twist at the end. Driven entirely by women, the script is determined to appeal to a matching demographic, and to a sexist degree. The newly formed crew deal in dresses, shoes, and make-up to an alarming saturation, as if each woman necessitates a Barbie-like facade. As much as Ocean’s 8 casts for diversity, it’s also intent on playing to type. Ocean’s 11, in original or remade form, never felt stuck playing to a masculine audience.

What matters is whether Ocean’s 8 carries itself with a specific suave. That’s the identity of this series, and which Ocean’s 8 brings over. Bullock exudes cool and confidence in the lead. Along with Cate Blanchett, the two sit atop the criminal ranks without a speck of fear. So good they are, their plan is executed with the slimmest of tensions. Little goes wrong, a perky, almost friendly bit of thievery. Tension isn’t something Ocean’s 8 deals in.

It’s difficult to ignore how Ocean’s 8 feels like a facsimile, treading a line between gender reinvention, distinctive style, and formula. Performances help. Hathaway’s gaudy starlet and Helena Bonham Carter’s panicked fashionista, together, deserve a movie of their own. There’s more chemistry between them than any of the others, even during those shots where everyone occupies the same frame. That’s enough to give Ocean’s 8 a pass, but this is one that needs the touch of Ocean’s trilogy director Steven Soderbergh. 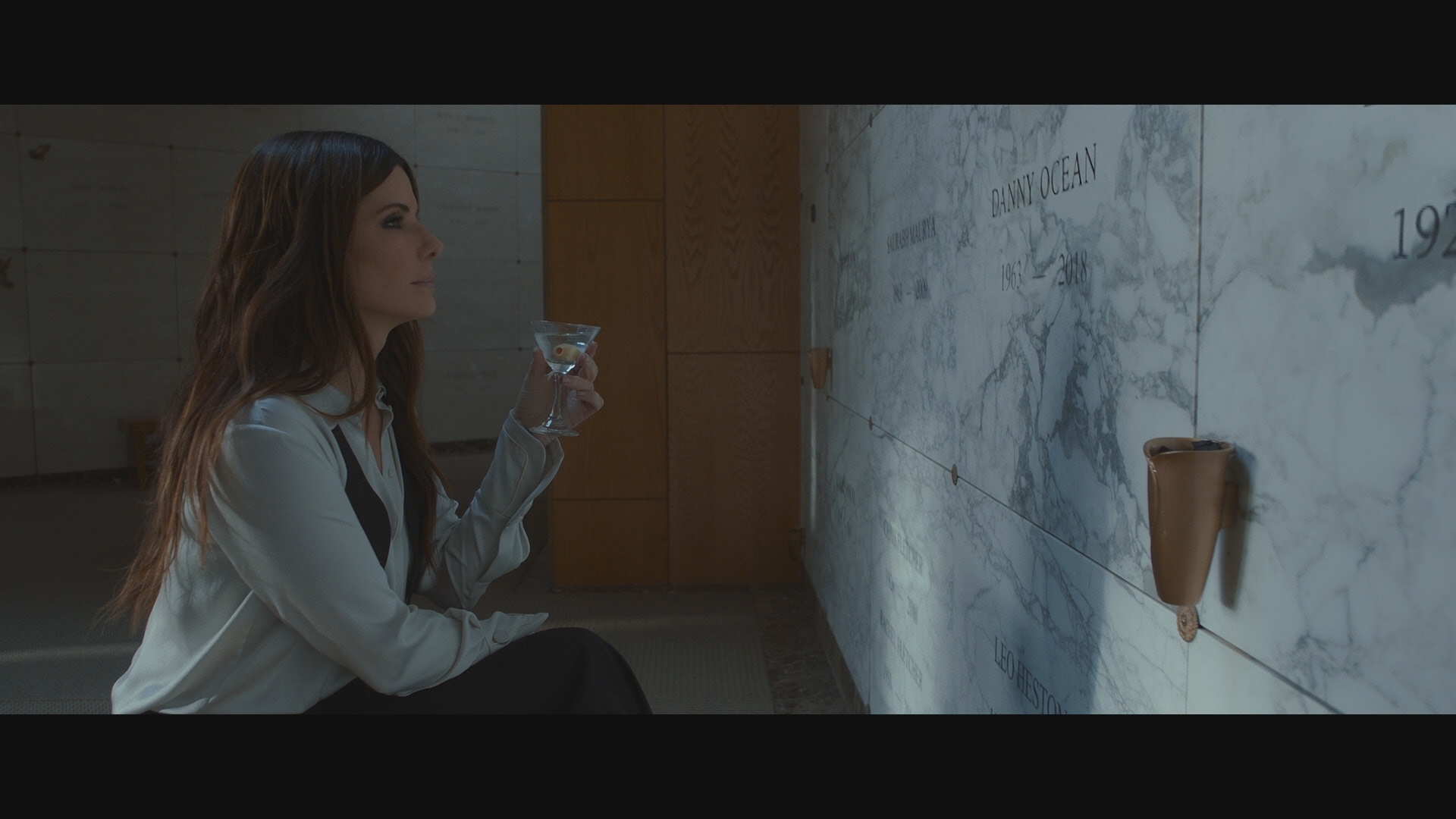 Ocean’s 8 is interesting from a visual standpoint. Seeking a dose of equality, the digital production finds it necessary to smooth over the actresses’ faces. Smeary skin tones show up everywhere and on nearly everyone. Bullock is especially hit, as if her skin texture were sandblasted off.

That’s offset with light sharpening, enough to leave the occasional round of ringing. All of Ocean’s 8 looks edgy and imprecise. What doesn’t help is a constant barrage of noise, not helped by what appears to be a lesser encode. Edge enhancement only brings this out further.

A Dolby Vision pass helps sink in black levels. Density stays high and shimmering diamonds reflect piercing brightness. While contrast falls on the darker end of the spectrum, enough is here to take advantage of the format.

Hampered by post-production tinkering, Ocean’s 8 chokes itself out on Blu-ray. With limited room in regards to the encode, visuals take on a chunky, buzzy quality that fails in creating an attractive style. Edge enhancement pops up, along with souring smoothing, wiping skin texture and adding to the thick digital artifacts.

That’s bad, yet black levels truly fail to reach black too often. A number of scenes dip only into a navy blue, revealing additional noise in shadows. Others fall into a pattern of gray, ruining contrast and dimension.

Both discs utilize Dolby Atmos for their needs. Most of the sonic effects use ambiance to fill in the soundstage. Ocean’s 8 doesn’t require discrete moments otherwise. Luckily, the New York setting is a vibrant one, stretching the city’s sounds wide. Some rain slips into the available channels too.

Blanchett is introduced inside of a club, background music tearing into the low-end for a deep, rich result. That’s it for the LFE. Everything else relies on the center channel for dialog, reproduced cleanly and well.

Ancillary deleted scenes were cut for a reason. Re-imagining the Met Gala peeks into the process of creating the heist setting for 13-minutes. A Heist in Heels delves into the concept of this sequel for 11-minutes, with Ocean’s Team looks at the casting. Note all of the Ocean’s 8 bonuses reside on the Blu-ray only.

Ocean’s 8 puts the series on a different (if similar) path forward, but it’s missing the touch of Steven Soderbergh.

The 15 unaltered images below represent the Blu-ray. For an additional 25 Ocean’s 8 screenshots, early access to all screens (plus the 15,000+ already in our library), 50+ exclusive 4K UHD reviews, and more, support us on Patreon.