Meeting of the Cursed

In just minutes, Frankenstein Meets the Wolf Man hits the acceptable limit for tropes. The film opens in a graveyard at night. A storm is approaching. Crows caw and swoop into the frame. There’s a full moon overhead. Then, grave robbers step onto the scene, invading the mausoleum of the Talbot family.

That all happens before scenes of angry villagers, a doctor gone mad, and a sympathetic gypsy appear. Frankenstein Meets the Wolf Man is more than Universal’s first monster mash – it’s a clash of both series’ cliches and formulas, a celebration of sorts, with box office allure the real goal.

Universal’s idea to bring their monsters together is an undoubted stroke of genius. From a marketing perspective, Frankenstein Meets the Wolf Man is a made-for-poster-art, guaranteed sell outs masterwork. Toss in Lon Chaney Jr. and Bela Lugosi and Frankenstein Meets the Wolf Man has as much a chance to die in terms of profitability as either monster.

From a marketing perspective, Frankenstein Meets the Wolf Man is a made-for-poster-art, guaranteed sell outs masterwork

In execution, it’s a tepid offering, certainly safe in relying on the familiar elements that defined the Talbot and Frankenstein legacies. Yet, it’s a return to a darker, more sinister feeling horror. That’s in spite of the exploitative style of a versus movie. Cinematography returns to ominous foregrounds and dominant shadows.

Chaney’s take as Larry Talbot remains empathetic, even in these circumstances. He only wishes to die, although no one seems to consider the dissection plan from Ghost of Frankenstein; dissection sounds definitive, even for werewolves.

The same empathy is applied to Frankenstein’s monster, although lacking Karloff’s spark in the role. Bela Lugosi comically lumbers about, partially at no fault of his own. Due to the events of Ghost, this monster is blind, although via post-production tampering, that’s unstated. Even forgiving the botched plotline, Lugosi’s shambling walk is too goofy and awkward to strike fear. Yet, it’s also the dominant, accepted saunter of this monster in mainstream circles.

Consider too the promised climax. Infected by the full moon, Talbot hops about around machinery and boxes. The monster sweeps his arms in circles, hoping to strike. It’s not the match promised by marketing.

Other characters hardly matter. Patrick Knowles returns to the series post-Wolf Man although as a different character. His Frank Mannering becomes afflicted by the curse to see life continue at all costs, striking Frankenstein’s creation with electricity despite the chance to end it all. He can’t bring himself to kill either man, a bizarre take on the Hippocratic oath. Interesting, were the whole concept not tied up in the routine. 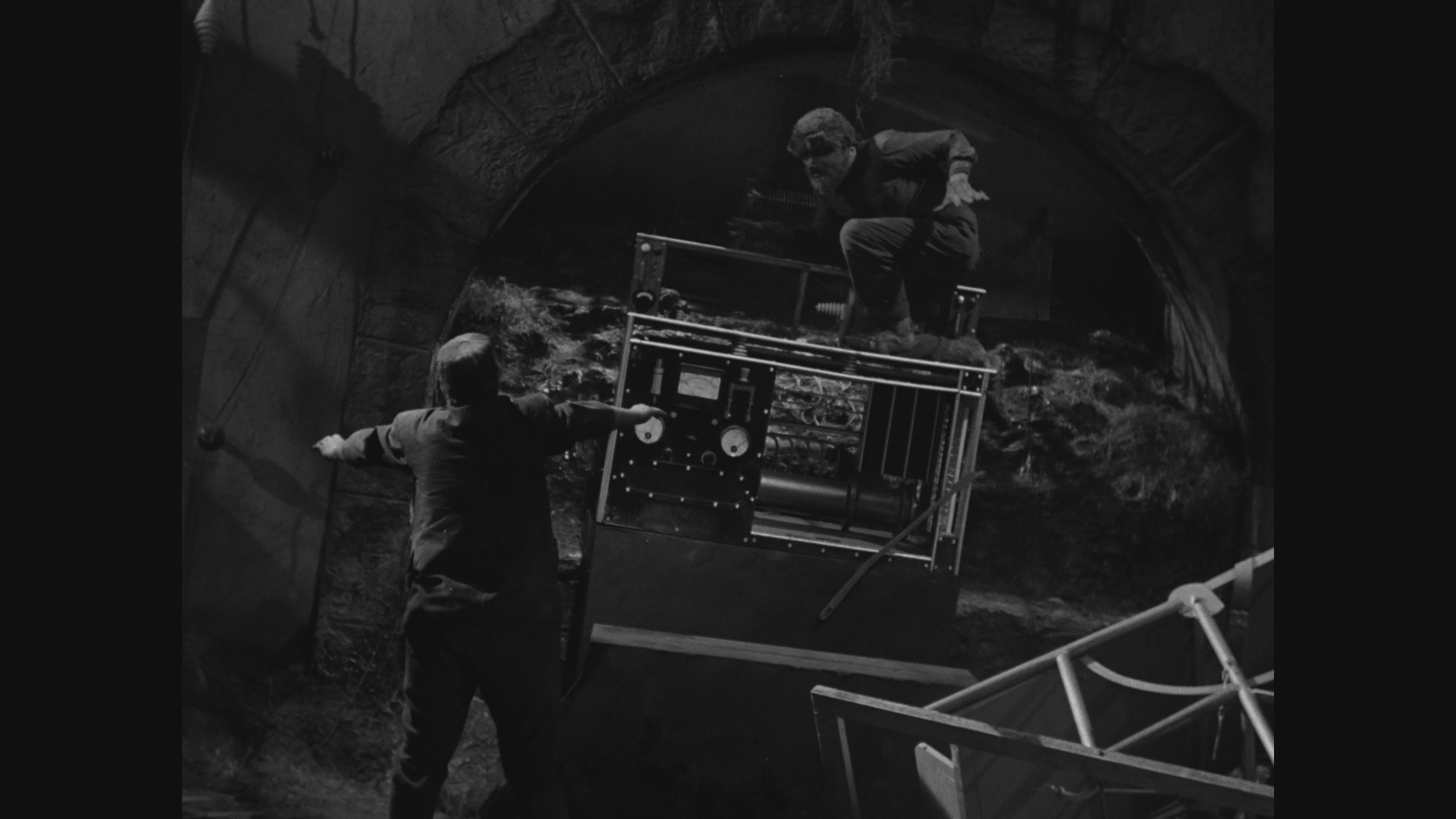 There’s suspicion in the grain structure of Frankenstein Meets the Wolf Man. It’s resolved well by the encode, but leaves behind a digital residue. Touch-up tries to lessen the natural grit, leaving behind a reduction in definition. Light smearing is noticeable in certain close-ups. From afar, a waxy look from low-pass filtering is left behind.

Detail does earn mention, but to a lesser degree than Universal’s best in the Monsters set. Close-ups on Lugosi reveal the texture of the make-up. On the Wolf Man, hair is defined. Frankenstein Meets the Wolf Man is hardly a DNR hack job, but it’s loss is in overall clarity.

The finale poses a challenge to this DTS-HD mix. Notably, the explosion of a dam and the ensuing rush of water. Coupled with the horn-blaring score, that’s a lot for this 75 year-old audio track to handle. It does manage though, offering a pleasing range of fidelity and clean lows. The lack of distortion on the opposite end is a standard in how to master films this vintage.

All of the dialog stays intelligible without hissing or popping interfering.

Just a trailer as Frankenstein Meets the Wolf Man is sharing a disc with the House of monster films.

In a meeting of tropes as much as monsters, Frankenstein Meets the Wolf Man celebrates Universal’s monster series as a whole.

The 15 unaltered images below represent the Blu-ray. For an additional 22 Frankenstein Meets the Wolf Man screenshots, early access to all screens (plus the 15,000+ already in our library), 50+ exclusive 4K UHD reviews, and more, support us on Patreon.