A renegade, gun-toting priest battles a shadow demon for the soul of a young boy who could open the gates to Hell. Inspired by everything from The Omen to Stephen King’s Needful Things, Bram Stoker’s Shadowbuilder is a surprisingly ambitious, b-movie supernatural thriller that knows what it wants and occasionally delivers.

Released in 1998 to little acclaim, the movie stars Michael Rooker and includes genre stalwart Tony Todd in a supporting role. What could have been a minor horror classic is hampered by now-dated special effects for the demon stalking the small town of Grand River.

Shadowbuilder is the type of competent R-rated movie one often came across browsing the horror shelves at Hollywood Video or Blockbuster. It’s not going to change your life and the dated computer effects are decidedly hokey now in retrospect. If anything has changed in filmmaking over the past twenty years, the rise of fluid CGI and digital F/X have entirely changed the game. But the story has its unique religious properties and is something different, especially in light of changes to horror over the past twenty years since the movie was first released.

… the story has its unique religious properties and is something different

Taking the subtext of a spiritual war between good versus evil that is inherent to classic horror films such as The Exorcist, Bram Stoker’s Shadowbuilder makes that subtext a literal war happening right here on Earth. Father Vassey, played by the always entertaining Michael Rooker, is a rogue Catholic priest trained to directly battle the forces of darkness. Handy with fire arms and without remorse for satanic followers, he’s a much different kind of priest than most movies portray.

More a soldier for the Church than a real believer, he’s ruthless in his quest to stomp out the Church’s enemies. Father Vassey is far more conflicted than the standard protagonist in supernatural horror, especially once his backstory is revealed. It’s that texture in the characterization and Michael Rooker’s performance that gives Shadowbuilder a little extra juice.

Shadowbuilder begins with an ominous ceremony summoning a shadow demon from Hell. Introducing a fairly complex mythology vaguely derived from Judeo-Christian beliefs about Creation and the first angels, a satanic cult has brought a demon called the Shadow Builder to Earth. Once this demon obtains the pure soul of a young boy named Chris Hatcher (Kevin Zegers), the gate to Hell will open and the Shadow Builder will grow unbeatable. The demon’s influence begins to spread across Grand River, compelling people to attack each other. Can a priest that has lost his faith and a sheriff band together to save the town from this insidious evil?

The big things that stick out about Bram Stoker’s Shadowbuilder are the early digital special effects, evident whenever the demonic creatures appear. The demon’s form first begins as the Smoke Monster from Lost’s distant cousin, before gradually transforming into a human figure with oily blackness surrounding his opaque features. While the visuals may have been impressive in 1998 for a low-budget horror movie, they haven’t held up well over time. It’s not an unforgivable sin for low-budget horror but younger viewers may have a tough time buying the VFX.

The real problem is the demon’s vocal delivery and pretentious dialogue. For what should be an incredibly terrifying demon, the Shadow Builder is awfully chatty. It’s a bit of a shame since the suspense and pacing are superb. A horror movie needs an effective villain almost more than a great plot. The most frightening moments involve demonic dogs and their grisly fate. Pet lovers may want to avert their eyes.

Most are familiar with Bram Stoker as the author of Dracula. His name is attached to this movie because Bram Stoker’s Dracula was a big horror hit in the 1990s and the producers believed attaching the author’s name would help sell tickets. The movie is only tangentially related to Stoker’s short story.

The movie takes far more inspiration from projects such as The Exorcist and The Omen, dabbling in their occult themes and religious overtones. It also throws in a couple of influences from Stephen King. Director Jamie Dixon’s movie has stylish direction and a decent cast for a b-movie made for the rental market. The horror movie is effective for what it is, a cheap supernatural thriller made before modern VFX could be effectively done in low-budget filmmaking. 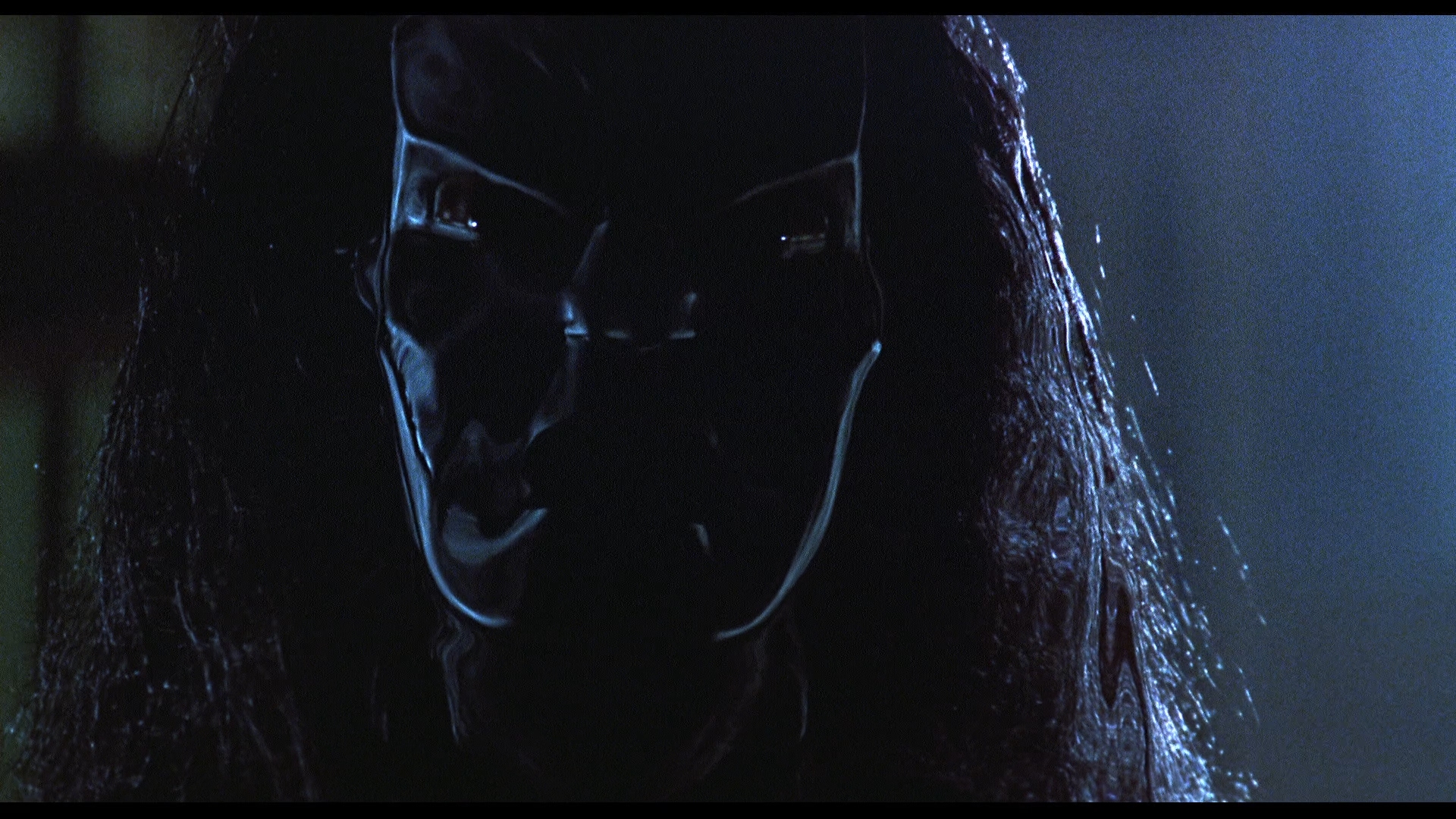 MVDvisual provides the complete, uncut Shadowbuilder in a solid, serviceable Hi-Def presentation. This Blu-ray is overwhelmingly better than prior home video editions, which were quite limited 1.33:1 transfers put out on DVD. The b-movie was a 1998 Canadian production made on a limited budget, so picture quality expectations should be tempered. The main feature runs 101 minutes on a BD-50.

The 1080P video is presented at the film’s intended 1.85:1 aspect ratio. It is encoded in excellent AVC, handling the film’s occasionally noisy grain structure and exotic special effects for the creature. An oily, black sheen surrounds the Shadow Builder demon through the use of filters and rotoscoping. It produces an unusual visual effect. The elements are shown in generally film-like quality in decent condition. Some processing and sharpening appear in select scenes.

Black levels and contrast fluctuate all over the map, largely depending on the amount of light and darkness available in each scene. Lighted exteriors have nice depth and average definition. The darker interiors are hampered by elevated black levels and filters applied to the night scenes. This is flat, largely uninvolving cinematography that isn’t a showcase for great detail or compelling picture quality. The film scan is somewhat underwhelming in clarity, albeit the elements are in stable condition and free of significant problems.

Bram Stoker’s Shadowbuilder has never received a surround mix and this Blu-ray edition isn’t any different. The original stereo mix is presented in clean-sounding 2.0 PCM. There are no dialogue issues. While lacking the overall impact and dynamics of more recent genre efforts, the moody score by Eckart Seeber is inspired by Jerry Goldsmith’s classic Omen score. This is fairly crisp stereo with solid imaging and depth.

Optional Spanish subtitles are included, appearing in a yellow font. I don’t speak Spanish, but reports from others indicate there are flaws in these subtitles.

Bram Stoker’s Shadowbuilder is #10 in the MVD Rewind Collection. The special collector’s edition comes with a translucent Blu-ray case in a perfectly designed slipcover that recalls the movie’s VHS days. Inside the package is a collectible mini-poster. The cover has reversible artwork. The Blu-ray is coded for all regions.

MVD apparently tried everything possible to get Michael Rooker to make an appearance, but couldn’t get him on board. They did come up with veteran genre actor Tony Todd for the special features. Considering Shadowbuilder had never received any special features whatsoever in various DVD editions, this is a veritable feast of them for the b-movie.

Audio Commentary From Director Jamie Dixon – A fine commentary that recalls the intricacies of production in some detail. It’s an informative discussion that covers both personal anecdotes and how the film was constructed behind the scenes.

The Making of Shadowbuilder Featurette (33:22 in HD) – Interviews with director Jamie Dixon, writer Michael Stokes, and actors Andrew Jackson and Tony Todd comprise most of this excellent behind-the-scenes featurette. Andrew Jackson recalls the problems recording his voice performance for the Shadowbuilder demon, which ultimately had to be scrapped and replaced with another voice actor.

Shadowbuilder: Visual Effects Featurette (13:26 in HD) – Director Jamie Dixon discusses his background in early CGI effects with PDI, an effects company that worked on dozens of Hollywood films in the 1990s. He briefly covers the filters specifically developed for the movie and early computer effects on the film.

Shadowbuilder Original Theatrical Trailer (01:32 in SD) – A fantastic horror trailer from the 1990s because it has the infamous Movie Trailer Guy voiceover.

A forgotten demon movie from the 1990s is given special treatment in MVD’s Rewind Collection. The supernatural thriller is derivative but has a fine lead performance from Michael Rooker and a solid supporting cast.

The 15 unaltered images below have been taken directly from the Blu-ray. For an additional 14 Shadowbuilder screenshots, early access to all screens (plus the 15,000+ already in our library) in full resolution, fifty exclusive 4K UHD reviews, and more, support us on Patreon.