Both want to see and live in America. Their problem is they both share command of a new Russian submarine. The goal then is defection, and their dream-like looks as they consider the possibility (like teen girls staring at a new boy band) slips Hunt for Red October toward propaganda. The dream is idealist; white picket fences, two and a half kids, and a puppy. Disdain for their homeland’s warlike posture doesn’t seem logical either, particularly when staged in the historical Cold War.

Drenched in the paranoia and mystique of the Soviet Union (only possible when viewed from the ‘80s), Hunt for Red October acts as a Navy recruitment tool. With author Tom Clancy’s source novel providing a tech fetish, the goal here is to drum up American heroism against an ill-defined Russian foe. Stellan Skarsgard serves as an antagonist, but finding him amid the chaos – let alone draw out a character – is impossible. He’s a face that stands in for torpedo launches, a human element against the metal.

Ryan’s panicked flights to various meetings with military or CIA officials keep things above water, literally. These grounded elements fall into a trap of repeating themselves. Ryan shares his info, military types hungry for conflict scoff, and then he moves onto the next. True heroism is underneath Ryan, including a snappy sonar operator (Courtney B. Vance) who uncovers the Russian tech.

The result of this chaos is a tension-driven, underwater thriller. It’s effective. Scenes of torpedoes nearing a hull convey the scale and drama. ILM’s visual effects stand up to scrutiny, and when edited with the believable interiors, work in tandem. The first of the Jack Ryan series sees Adam Baldwin in his lone outing in the role, convincing war-mad superiors Connery’s commander is ready to hand himself over to a foreign power. Ryan, at times, seems like a bit player, existing for the audience and less to establish a screen hero. Connery though is magic as usual.

For the finale, it’s a shared operation. American subs sweep in to divert Russian torpedoes, Ryan picks up a gun to chase a saboteur, and James Earl Jones concocts a clever plan to save the Russian crew. It’s a smart, well intertwined climax, cleanly bringing together each element and elevating excitement. In this mix of water swells, explosions, and bullets, it’s easy to miss the script’s craftsmanship. And also, using the haze of action to cover the chest puffing superiority of America’s military to save those who just want to fish. 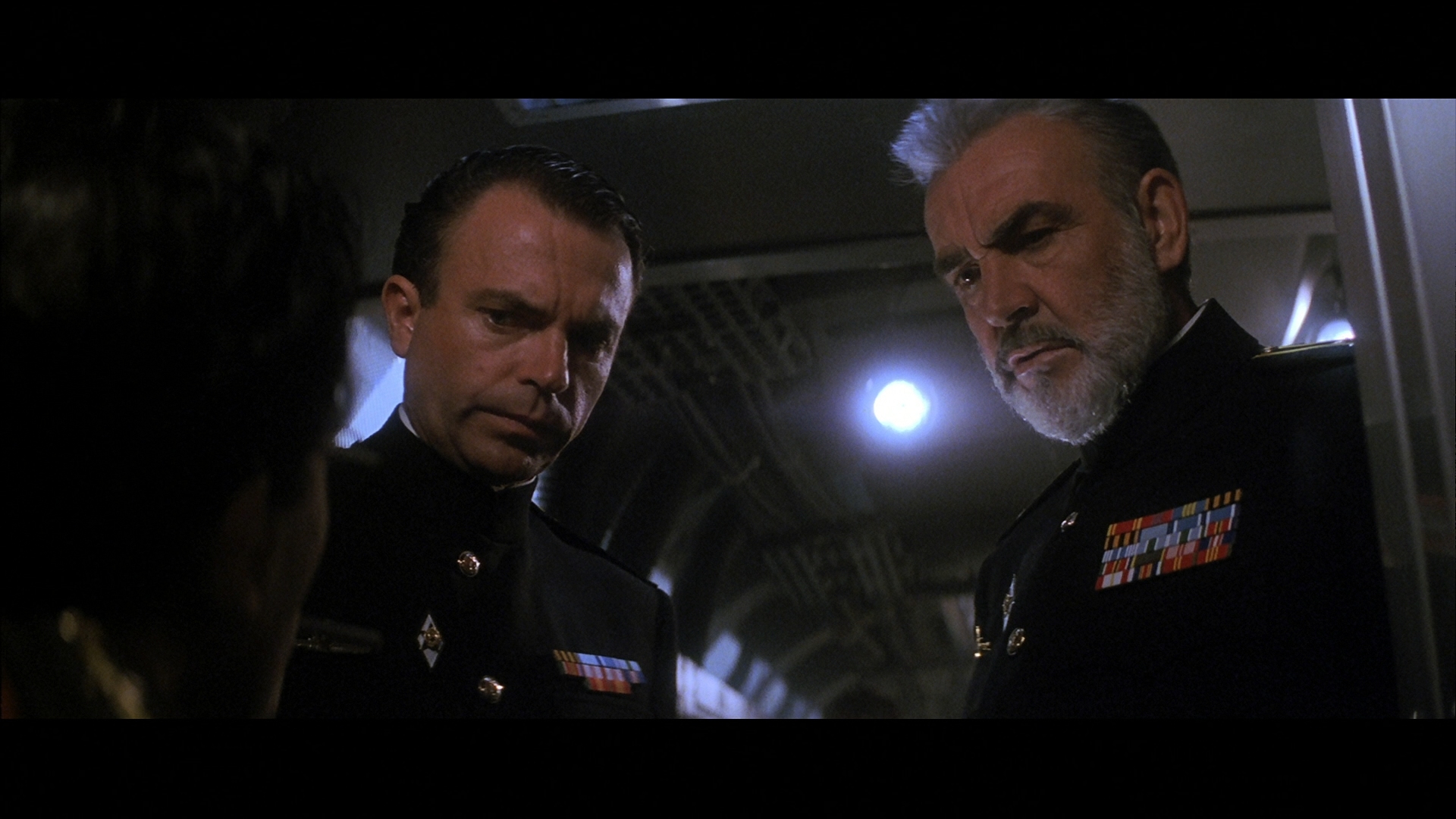 Hunt for Red October is not prime source material. Although shot on 35mm, it looks more 16mm given the grain structure’s thickness. Although heavy and even overbearing, grain doesn’t venture into unnatural. Hunt for Red October maintains a filmic appearance, and Paramount’s well managed encode is enough to handle this material. The miss comes in the form of banding, a constant presence during effects scenes. Shot dry, that’s not water. Miniatures travel through smoke and multitude of gradients cause issues.

Signs of filtering draw more concern. Watch as Ryan first enters James Earl Jones’ office, especially medium shots. The weird smearing effect draws ire. That’s not the well textured appearance expected of a 4K master. However, close-ups show off dominate texture. Their sharpness and detail find the best aspects of a 4K source. Cinematography drifts in terms of focus so it’s not peaked at all times, but true to this grungy material.

Filtering isn’t the only issue; it’s smaller in comparison to crush. Despite the Dolby Vision pass, black crush smashes the Russian uniforms. Hunt for Red October is a dark film, even when not in the recesses of a sub. All-black uniforms won’t help in those circumstances. As an aside, that darkness allows the various lights and computer screens to dazzle. High brightness helps bring up the ins-and-outs of working inside these capsules, offering plenty of color as well.

Hunt for Red October’s look, aside from the filtering and crush, recalls Sony’s efforts on Ghostbusters ‘84. Both films share a similar grit. What matters is the encode, and Paramount’s work is exemplary, banding aside.

Matching the original Blu-ray release, the sonic soundstage comes from a vivid TrueHD 5.1 mix. Likely sourced from an original six-track 70mm blow-up, the underwater action demands precision. So it is. Water is a constant presence. The sense of being trapped inside a submarine is complete and total. Pings from sonar readouts pop from each chatter. Engine sounds fill the soundstage. Voices track between the front and rear soundstages.

Fidelity stays high after nearly 30 years, including clear dialog and sound effects. That is, except for LFE support. While dynamic range is exaggerated (the booming choir belting the Russian anthem over the opening credits is deafening), support for the low-end never rises above muffled. Part of that comes down to the water effect, but when internal in a sub, it’s a miss. Same goes for some exterior shots of a helicopter, where the rotors won’t react with the force they should.

Director John McTiernan provides a commentary track. That’s on either the Blu-ray or UHD. On the Blu-ray alone is a dated but excellent behind-the-scenes piece, Beneath the Surface. If this is your first go round with Hunt for Red October, this 29-minute piece is a necessary watch.

The Hunt for Red October

A fine submarine drama with a fantastic cast, Hunt for Red October holds up thanks to admirable tension.

The 15 unaltered images below represent the Blu-ray. For an additional 24 Hunt for Red October screenshots, early access to all screens (plus the 14,000+ already in our library), 50+ exclusive 4K UHD reviews, and more, support us on Patreon.