All Out of Love

If your ethics are so distorted they end up as a plot point for the likes of Deadpool 2, it’s time to reconsider. In this case, it’s the religiously founded bigotry of conversion therapy. Deadpool 2 doesn’t actually feature a supervillain, rather a litany of those wounded by loss or abuse – the key being a young super-powered orphan, tortured by a zealot attempting a “cure.”

That kid is Firefist (Julian Dennison), a character whose name is self-explanatory. Therapy doesn’t work and neither is his special quality a fault. Both sides find themselves seething, leading to an outpouring of superhero violence. That’s what Deadpool 2 is going for.

With all of the one-liners, zingers, retorts, and miniaturized penises (?!), Deadpool 2 has a heart. The first Deadpool didn’t, a straight riff on the genre. Deadpool’s sequel isn’t dropping the parody; there’s plenty of Marvel and DC bashing in tow. On the underside though is some loss and dramatic gravitas. There’s not a key character who isn’t hurting in some capacity, covering their demons with either oversized weapons or humor. It’s a joyful combo.

There’s not a key character who isn’t hurting in some capacity, covering their demons with either oversized weapons or humor

Is it as funny? Sure. The ratio of hits/misses doesn’t change between films. Handled with care, run-on gags from the first movie successfully land. Wacky action scenes carry bite, done with more pizzazz and budgetary bite than the rather routine set-pieces in Deadpool. Careful pacing ensures jokes roll in consistently with little to no comedic dead air. Even emotional spots take risks, assuming the fourth-wall shattering Deadpool 2 is ever at any risk. It’s primarily free form material.

The absurdity of this genre is on full display. Deadpool 2 adores the opportunity, the crescendo being a post-credits cookie of such greatness, it’s arguably the best part of this movie. Wade Wilson/Deadpool (Ryan Reynolds) takes joy at exhibiting the dorkiest parts of fandom, acting out like a child for the whims of the audience. Funnier still is how Deadpool 2 takes potshots at those who spent cash on crash-and-burn failures like X-Men: Wolverine and Justice League. This is a movie willing to slap back at hardcore fans who defend all.

Deadpool 2’s success lies in its ability to generate laughs – hard R-rated laughs. There’s little held back in terms of gore or language; no PG-13, mass audience appeal here. Deadpool 2 works as a platform, to seize the popularity of superheroes and singe them a bit. And, to work as a mutant take on social issues, as any pairing with X-Men should. Even with an easy target like conversion therapy, Deadpool 2 wraps this in a comfortable, even expected form. It’s a cushioned landing. 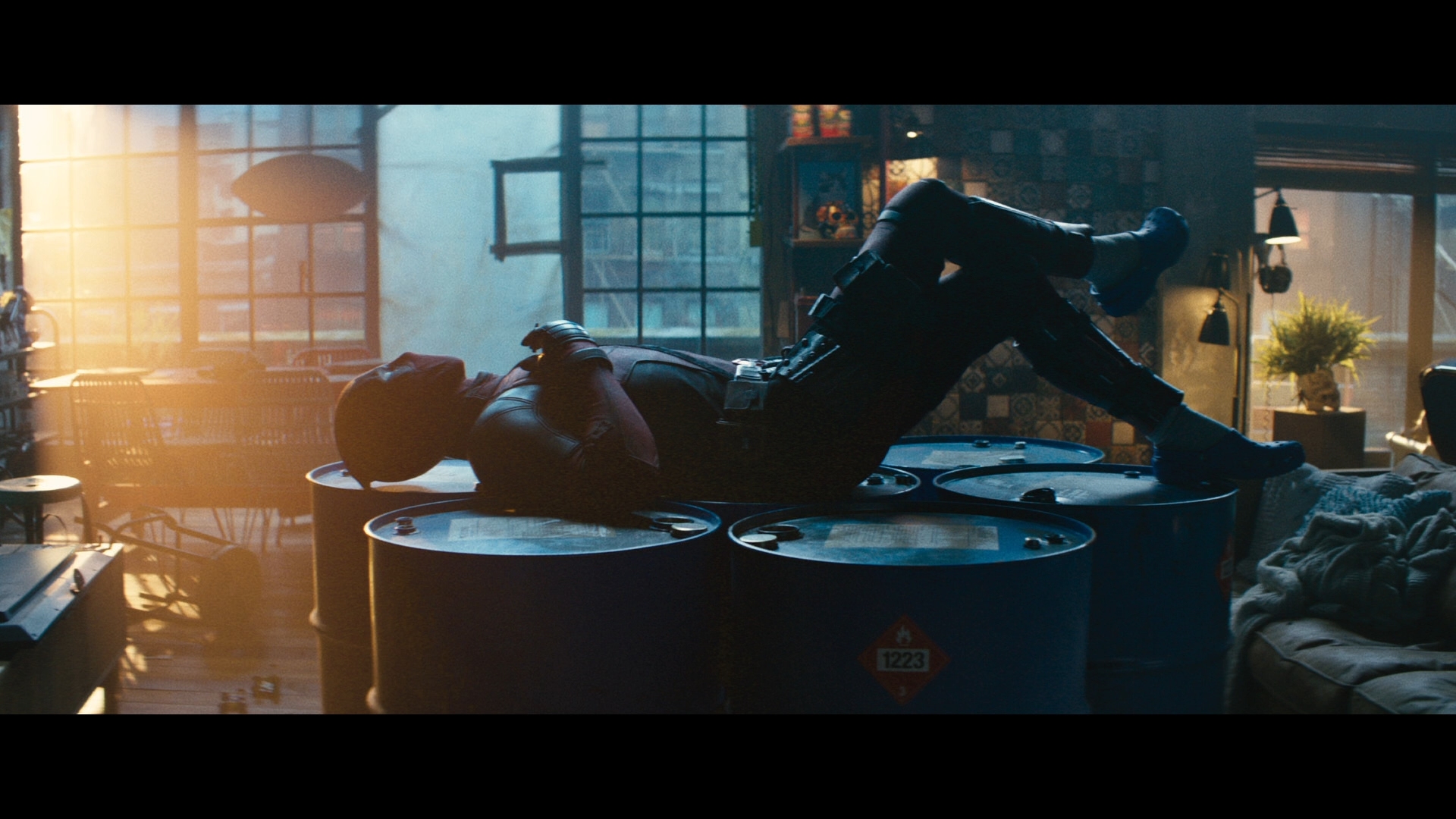 For an HDR pass, Deadpool 2 is awfully dim. The lack of range doesn’t represent “dynamic” in any way. It looks as if this digital production underwent a graying out before being transferred to UHD. Black levels never hit black. Contrast never finds brightness.

The gray that appears to wash over this presentation impacts color too. The red of Deapool’s suit shows no vibrancy. Flesh tones fall to a pale hue. Primaries end up squashed by haze. The lack of pop is a killer.

Detail is high though. Although clearly a 2K source even when relying on the eye alone, facial definition stands out. Texture on the suits, Deadpool’s included, shine. Definition maintains consistency too with no drops in sharpness.

With all of the above, it’s important to note the Blu-ray looks artificial in comparison. Yes, the reds of Deadpool’s suit exhibit more saturation, but it’s glowing in a way that doesn’t seem accurate, whether that’s intent or true to the source. It’s nice to have flesh tones though and actual contrast.

While the lesser of the two in terms of encode (obviously), that fault only impacts a handful of shots. Noise is a bit on the forceful side, but relegated to a minute or two of total runtime.

Nice, powerful LFE response gives this Atmos track what it needs. Scenes of Colossus and Juggernaut clashing reach powerful lows, appropriate for a fight of that magnitude. Guns have kick and when Deadpool chooses to end it all by blowing himself up, that moment carries some oomph. All instances of fire and explosion hit hard too, even if there’s little separation in force between all of these events.

In terms of separation, Deadpool 2 isn’t a master of surround use. They tend to blend into the soundstage. Stereos fare better. Still, the number of bullets falling around is pleasing. Ambiance in a noisy prison fills each channel. During the finale, fire spreads through an orphanage, convincingly so. There’s enough aggression and spatial usage to go around, if not to the degree of other superhero outings.

Ryan Reynolds, director David Leitch, and writers Rhett Reese & Paul Wernick join up for their commentary track over the theatrical cut. The additional dozen or so moments in the Super Duper cut have laughs, but it’s probably a bit too much, stretching Deadpool 2 well over two hours.

Deleted scenes and extended/alternate takes offer even more added material. A gag reel is gold, and six featurettes contain more laughs. Nothing is taken too seriously here. The Fun Sack is back, full of the promo videos Reynolds did in-character.

Still on comedic fire, Deadpool 2’s raucous and hilariously offensive humor is on point as it goes through the motions of the superhero genre.

The 15 unaltered images below represent the Blu-ray. For an additional 34 Deadpool 2 screenshots, early access to all screens (plus the 14,000+ already in our library), 50+ exclusive 4K UHD reviews, and more, support us on Patreon.