Pointing Back in Time

Action Point is a couple of different things. First, there’s the throwback angle, a return to coming-of-age, nostalgic films like Meatballs. Kids being kids, rambunctious, and uncontrolled. There’s beer, sex, and unruly fun.

It’s a Facebook meme, one shared by grandparents who bemoan the days they road bikes without helmets, cars without seat belts, and how they all turned out okay. No helmets or helmet technology feature in Action Point. Certainly, no seat belts either.

Then there’s a personal retrospective for Johnny Knoxville, the guy who made his money being an idiot on MTV, crashing shopping carts or blasting his castmates in the groin. He’s still doing that, nearing 50, flopping from roofs and ejecting harmfully from a catapult. Action Point is told primarily in flashback though, sending memories down to his granddaughter about the time he ran a bruiser theme park.

Credit for trying to elevate the thin material, at least

There’s a weird sadness to this aimless production. Mostly, Action Point drifts between stunt montages, a thinning story disappearing between scenes of people being mutilated on park attractions. All the while, Knoxville looks on saddened that this type of “fun” no longer exists. Sentimentality for the days when kids could grab alligators by the tail slip away. In the book-end modern day scenes (Knoxville sporting old age make-up), he berates PC culture and helicopter parents. Today’s adults won’t let their kin be set on fire anymore. What a shame.

Lawyers take away Action Point’s fun. Knoxville’s park is sued endlessly. That’s the plot, almost all of it. That too has a sense of introspective after Jackass found itself in public turmoil. Impressionable kids reenacted Jackass’ scenes. The R-rating attached to Action Point is enough of a warning this time, and earned too.

As a grandfather character, Knoxville learns from his past regrets. When his elder self, he relishes the past. Yet, this is a second chance to be a father. Being an irresponsible idiot for amusement took its toll on his marriage, and spending time with a new generation, he sees the damage his erroneous, care-free attitude caused. Much as he believes in letting kids break a few bones to learn hard lessons, it’s only now he realizes the cost.

That’s awfully mushy for something like Action Point. Credit for trying to elevate the thin material, at least. No one walks into a film with an alcoholic bear, loop-de-loop slide stunts, and underage drinking waiting for morality. Don’t worry: there’s plenty of injury to go ‘round, and almost entirely detached from anything else. Being carefree suits Action Point. 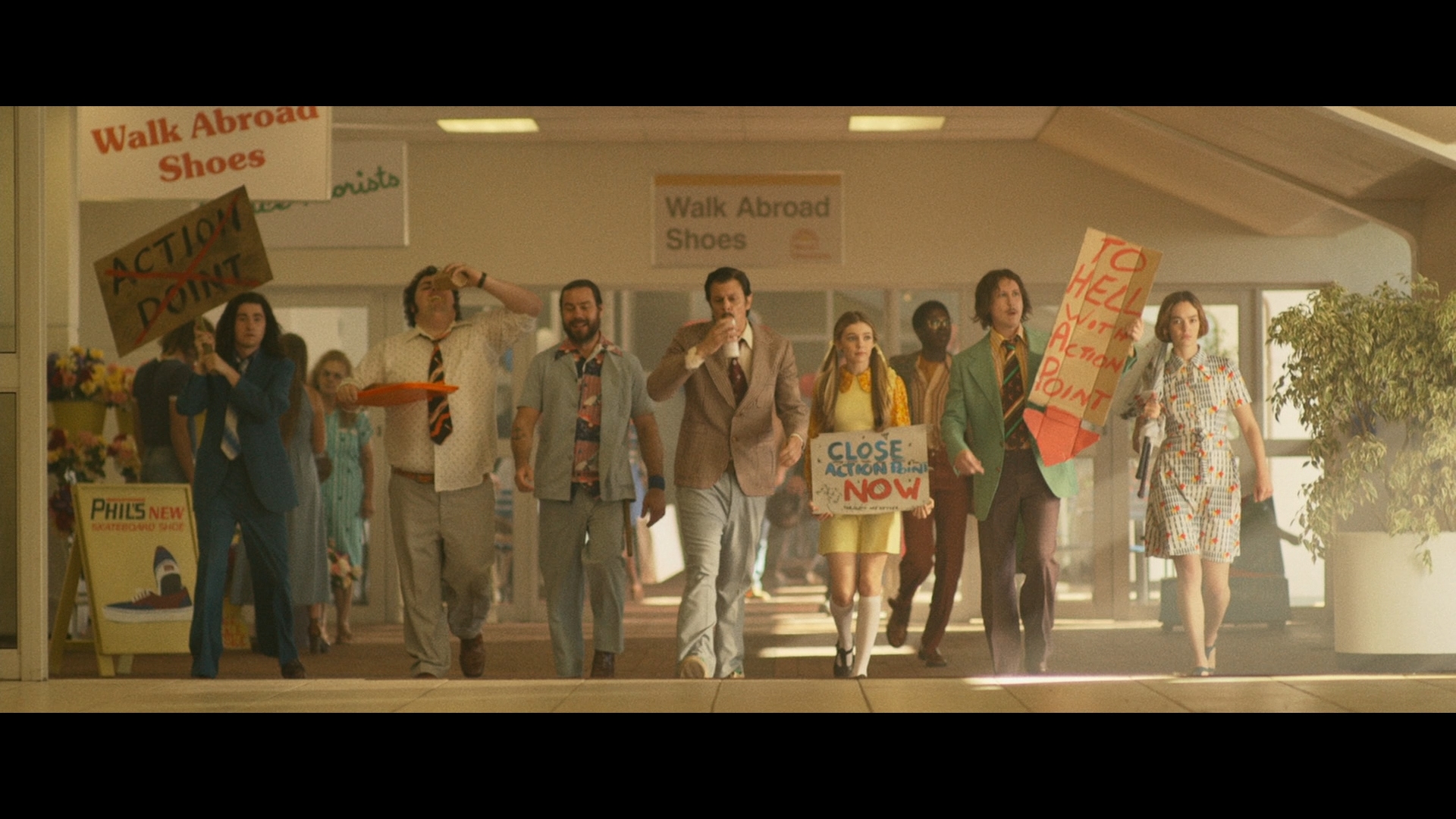 Two looks make up Action Point. In modern day scenes, stellar clarity and clear color make up a pleasing digitally-sourced presentation. Facial detail is great, selling how great the old age make-up is considering it holds up under this scrutiny.

In flashback, an artificial grain structure takes hold. The Blu-ray handles this material so-so. At night, this turns to chroma noise. One repetitious shot of a house on the lake draws ire each time. The color palette then shifts to a warmer orange/yellow hue, attractive in a vintage way. All hues shift to accommodate, primaries overheated and flesh tones bumped up.

Even with the vintage look, one constant remains: sharpness. Detail sprouts well, with long shots of the park revealing the unique, dirt-riddled landscape in full. Plenty of facial detail comes along too.

Mostly, this track holds to the front soundstage. Discrete effects in this DTS-HD 7.1 mix stay hidden. The park produces mild ambiance during peak hours. Generally though, the center channel has the most fun.

For the finale, things do come alive. Mayhem begins to swirl around, with zaniness evident in each speaker. Go-karts zip about, a bear roars in the stereos, and kids shout in every speaker. Afterward, a fireworks display ignites, digging into the low-end, followed by a hearty explosion.

Four featurettes barely break five minutes each. Unless morbidly curious, feel free to skip everything here. A blooper reel contains some gold though, and nine deleted/extended scenes take 12-minutes total to sift through.

Not fond of today’s helicopter parents or lawyers, Action Point tells a “good ol’ days” story with plenty of mayhem and injury.

The 15 unaltered images below represent the Blu-ray. For an additional nine Action Point screenshots, early access to all screens (plus the 14,000+ already in our library), 50+ exclusive 4K UHD reviews, and more, support us on Patreon.