Clifford DeVoe is The Flash’s best villain across four seasons of this CW show. He’s a manipulative genius, taking advantage of his expanded mind to control a woman to love and serve him. Through comic lore, The Flash uses DeVoe (Neil Sandilands) to expose the symptoms of abuse and how victims become trapped.

Dibny’s Elongated Man takes after Fantastic Four’s Reed Richards; he’s a stretchy caricature of that Marvel superhero. He wears a dopey costume. He makes pitiful jokes. Dibny is also an idiot, to which the script eventually turns into an empathetic turn. That can’t work.

Hopefully, after a misstep, The Flash can regain dramatic footing without the mastermind villain

In-between all of this is a convenient plot device. Barry, returning from the speed force that he entered to close out season three, creates a series of meta humans, filling the “villain of the week” quota the show continues to rely on. Luckily, despite numbering a dozen, they only attack one at a time. Stretched over the (too many) 20+ episodes, it’s a plodding method of extracting plot.

For a CW show, relationships continue to factor in. A wedding last season between Barry (Grant Gustin) and Iris (Candice Patton) solved nothing. Things devolve to a point of couples therapy, leading to a cringe-worthy awkwardness as they attempt to hide their identities. Joe West (Jesse Martin) finds romance with co-worker Cecile (Danielle Nicolet) who sprouts a super power while expecting. Babies inevitably bring a desperation quota into any series where writers need additional drama. Expect much infantnapping next season.

There’s still life in this show. The Flash ends on a grand cliffhanger, wrapping things around back to Barry’s messy past and future. It’s going back to The Flash’s massaging of time, how Barry’s own selfishness is a jump point for the series to toy with.

Sadly, DeVoe is gone, probably anyway. Hopefully, after a misstep, The Flash can regain dramatic footing without the mastermind villain. Also, hopefully, Dibny becomes erased by time. Or, just dump him like The Simpsons dumped Poochy. 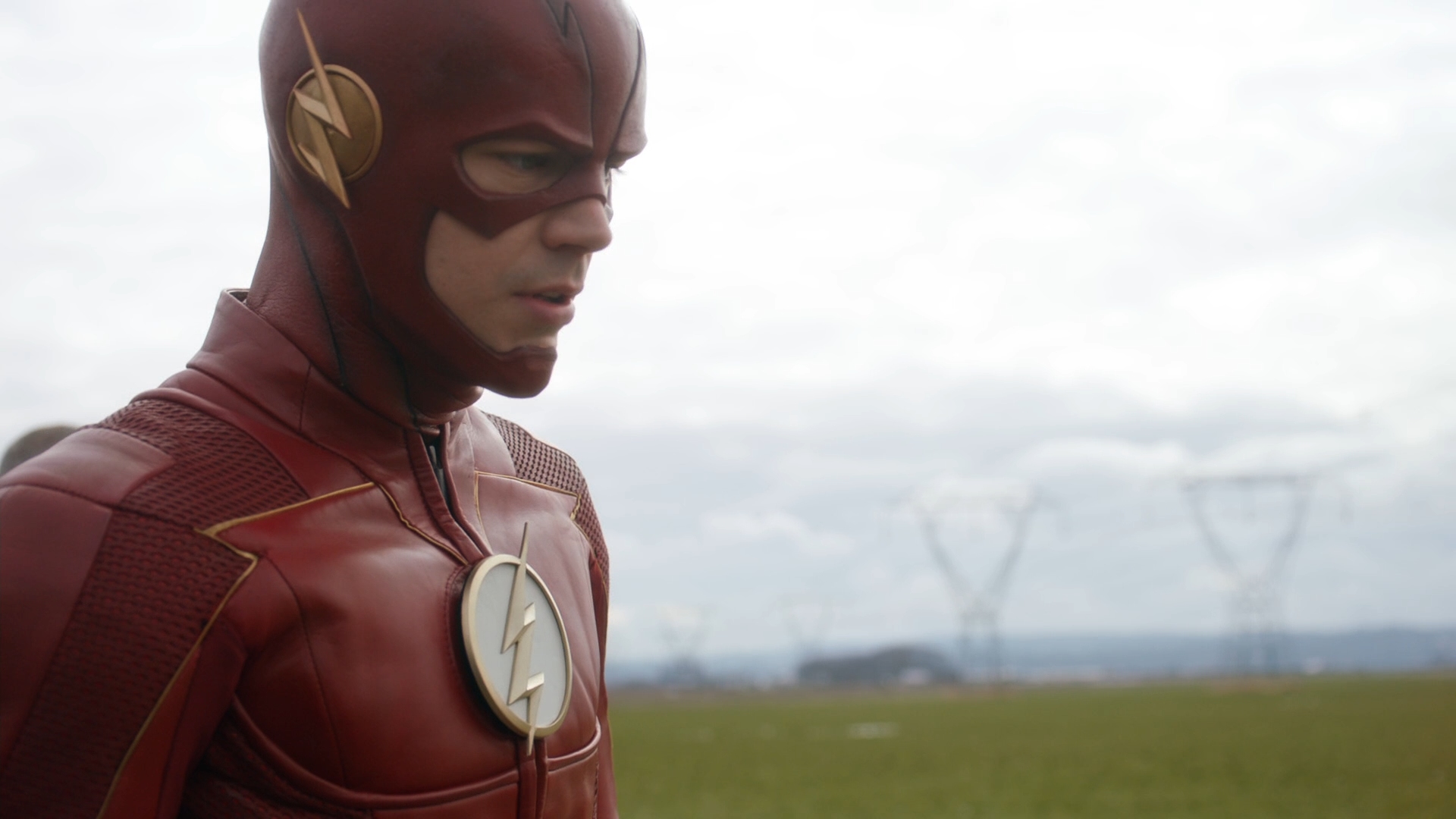 There’s a lot of content spread across the four discs of this set, causing a bitrate bottleneck. While still miles ahead of cable, Warner’s Blu-ray set exhibits definite issues with noise. Artifacting is a frequent bystander to the action. The Flash takes a dip in clarity over previous Blu-ray seasons.

That said, The Flash still exhibits hearty fidelity. Close-ups have ample opportunity for facial definition. Texture on clothing or the various superhero suits stand out. Central city exteriors define the various architecture without issue, even when paired with lower resolution digital effects.

This season requires a hefty amount of black levels. DeVoe’s lair is a calibrated mixture of bright LEDs and recessed shadows. It’s done well, without causing harm to detail. Pure black is commonly realized. Highlights stand out, especially the trails that follow Barry as he engages his speed. This is a series begging for an HDR pass.

Even at its most dramatic, The Flash retains a pleasant, colorful look. Reds and yellows of the refreshed Flash suit look great, and the overall bright palette is a looker. Things vary from warmth inside couples therapy scenes to the chillier style inside DeVoe’s lair.

Surround use isn’t on the same tier, but acceptable for the lower time budget of a weekly format. Barry sprints around the soundstage with convincing movement. Action uses separation only as absolutely necessary. Center channel dialog is nicely balanced at least.

Each DC TV set this year contains the Crisis on Earth-X crossover mini-series in its entirety. That takes up disc two, which also includes a featurette with the producers discussing this four-part special. Everything else is scattered. Deleted scenes show up for a variety of episodes. There’s a fantastic gag reel on disc one (turned into a small mini-episode of sorts), and disc three produces a featurette on Ralph Dibny’s inclusion and another with Katee Sackhoff joined by the writing team to discuss The Thinker. The Thinker earns another bonus on the fourth disc delving into the character, followed by a Comic Con panel encapsulating all DC TV.

The fourth season of The Flash hits a stumbling block by wasting the best villain of the series on a season littered with painful humor.

The 15 unaltered images below represent the Blu-ray. For an additional 13 The Flash screenshots, early access to all screens (plus the 14,000+ already in our library), 50+ exclusive 4K UHD reviews, and more, support us on Patreon.