With a decade of build-up, Infinity War goes all out with its spectacle. One computer generated war segues into another, becoming a repetitious and tiring mass of comic book violence. There is a story. Big bad purple Thanos snatches all of the Infinity Stones, using them for his world-devastating evil. Little of Thanos’ lore goes explained though, leaving him a thin villain, on the sidelines while the Avengers smash stuff for far too long.

Read our full review of Avengers: Infinity War for more.

Infinity War’s startling digital clarity is a benchmark. Not one instance of noise enters the imagery, even with a deluge of visual effects. There’s a perfect, window-like sheen to each shot.

Detail isn’t always peaked. Infinity War’s 2K master is evident to experienced eyes, lacking the pinpoint sharpness of a true 4K finish. Facial detail does enter the fray, and shots of spaceships and space deliver at high levels of definition.

Add in a generous, rich HDR pass and things improve. Shots of far off stars as ships pass by will light the screen with dense patches of brightness. All of the laser beams and explosions give a healthy palette of highlights. When the Infinity Gauntlet glows or reflects light, that’s the stuff HDR was intended for. Plus, Infinity War pushes black levels deep, offering resounding dimension and preserved shadow detail. True black is common.

Given the number of space vistas, Infinity War takes every chance to saturate the screen with rainbow-like nebulas. Iron Man and Spider-Man’s reds stand out even in a richly colored film. High density hues flood Wakanda with gold, green, and other splendor for the finale. Specific coloring decisions give each intergalactic locale a definitive look, usually held to a prominent, single choice. It’s still gorgeous. 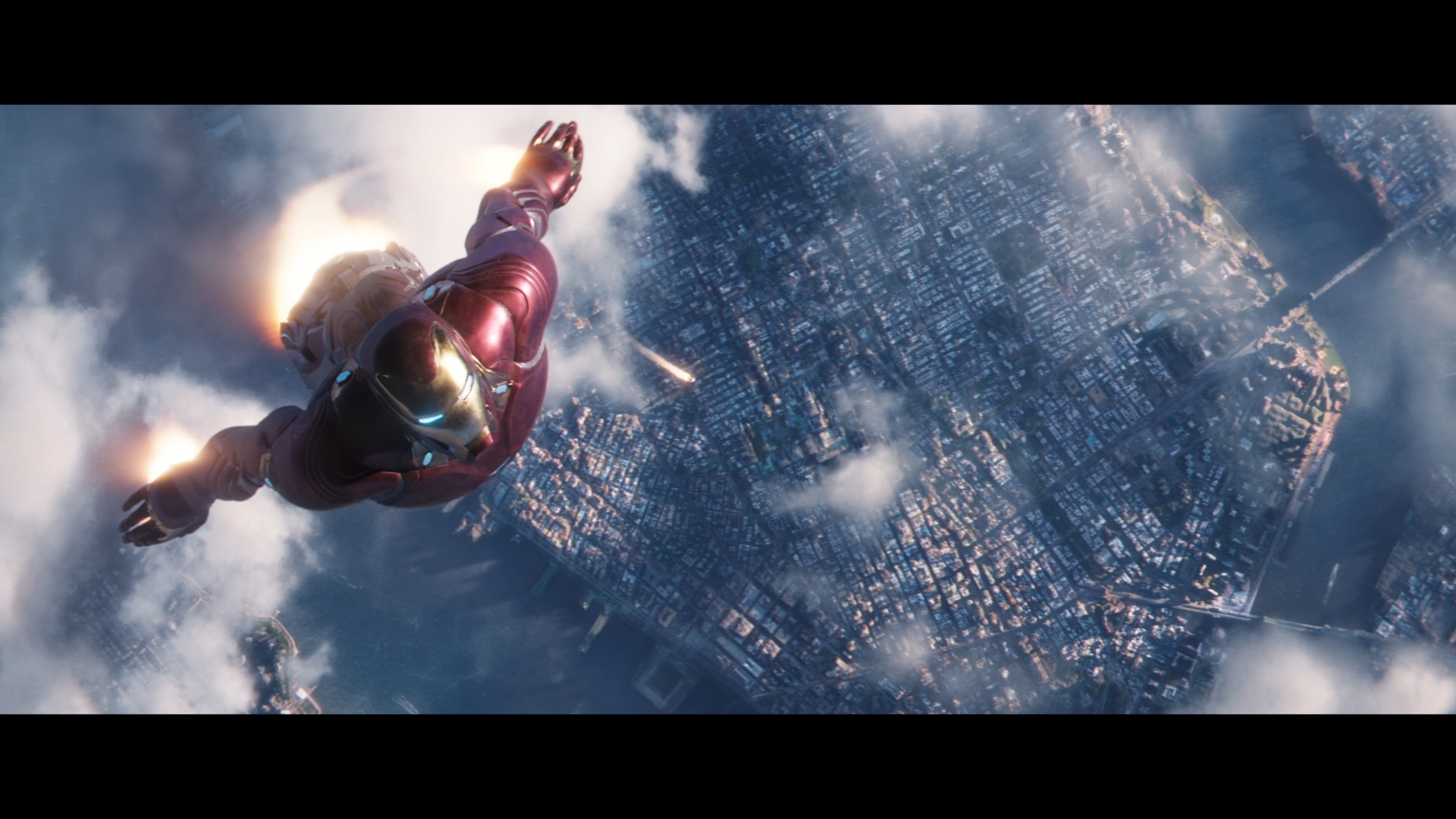 Splashes of notable color sweep across the screen. Space saturates nicely with swirling stardust filling the background. Bright contrast perks everything up, and matching black levels give Infinity War density.

Note the Blu-ray includes DTS-HD 7.1 as the primary format. The Atmos mix on UHD remains exclusive to 4K. Luckily, it appears the short-lived, derogatory “Atmouse” days have now closed. Infinity War is a boomer, albeit still mixed slightly quiet. A few touches of volume, and the disc comes to life.

Dynamic range matches the scale of visuals. When Thanos throws an entire moon at Iron Man, it sounds as such with dominating low-end support. Every Thanos punch gives the villain scale. Explosions rattle the room, and the various magic powers of Doctor Strange have fun sonically with sizable weight.

Positional use likewise matches the action. Staging gives ambiance on planet surfaces a unique sonic signature, with alien winds filling the soundstage. Debris fields fall in each channel with the high-dollar production affording the mix exquisite directionality. The Wakanda battle spreads thousands of monsters around, pushing the heroes deep into the center as they become increasingly surrounded. The effect is wonderful, and so is this mix.

Eh. There’s a fine commentary from directors Anthony and Joe Russo, paired with the writing team of Christopher Markus and Stephen McFeely. That’s followed by four promo-obsessed featurettes breaking down the key elements of production. If you can get past the marketing slant, there’s a small batch of interesting info buried in here. A short gag reel pushes a few laughs and 10 minutes of deleted scenes were wise cuts.

Infinity War brings the entire Marvel-verse together for the first part a mega finale, but the film’s bloated and even confusing script is a letdown.

The 15 unaltered images below represent the Blu-ray. For an additional 45 Avengers: Infinity War screenshots, early access to all screens (plus the 14,000+ already in our library), 50+ exclusive 4K UHD reviews, and more, support us on Patreon.