The Song of Solomon is clearly inspired by the originator of the possession genre, The Exorcist. A young woman, possessed by demons, faces off with Catholic priests in a battle of good versus evil, for her immortal soul. The difference this time is how far the filmmakers are willing to push things beyond acceptable limits.

Biro’s film is not a genre-busting masterpiece like The Exorcist. The slap-dash backstory and overarching themes make sure of that. Less concerned with characterization and suspense, The Song of Solomon is a knock-out, drag-down fight between a possessed woman and her exorcists for most of its running time. The focus here is the non-stop blood and gore, enriched with a much more visceral confrontation from the possessed.

Mary (Jessica Cameron) is a young woman that witnesses her father’s brutal suicide right before her eyes. Soon showing signs of possession, a priest is eventually called in to help her. Apparently an important case to the Catholic Church’s hierarchy, a series of exorcists are sent in to save Mary from her demonic possession. The situation looks more and more hopeless as the bodies start piling up around Mary. Leading to a truly twisted ending for a possession movie when the possessed Mary starts singing her evil song and all hell is let loose.

Unlike many low-budget horror productions, the gore and effects have an eerie authenticity on screen

The Song of Solomon’s calling cards are its incredibly realistic and nasty practical effects cooked up by Marcus Koch and Jerami Cruise. Expect blood, blood, and even more blood. Unlike many low-budget horror productions, the gore and effects have an eerie authenticity on screen. Director Stephen Biro clearly understands why people watch his films, often extending the imaginative and inventive F/X scenes as long as possible. One gruesome scene involves Mary eating bloody entrails, which seems like it goes on forever when it probably doesn’t last more than five minutes.

The Song of Solomon has its better graphic moments for horror fans and certainly brings it in the F/X department. The plot is underwhelming, relying on sinister forces within the Catholic Church and some ham-handed theology to advance the narrative. The drama becomes fairly repetitive once you realize most of the action is going to take place in Mary’s bedroom. Several priests are introduced, only for them to be quickly dispatched with little development. One intriguing character gets introduced, Father Corbin, only to end up a minor footnote in the overall narrative.

Those looking for a visceral satanic thriller with gut-wrenching blood and gore should look no further than The Song of Solomon. The independent horror movie probably could use a little more polish. But actress Jessica Cameron does a fantastic job as the possessed under all that prosthetic make-up. It’s a hard-hitting exorcism flick with enough variety for fans of the genre. I’m not sure it’s fit for mainstream consumption. Biro gets away with scenes no director in Hollywood would touch. 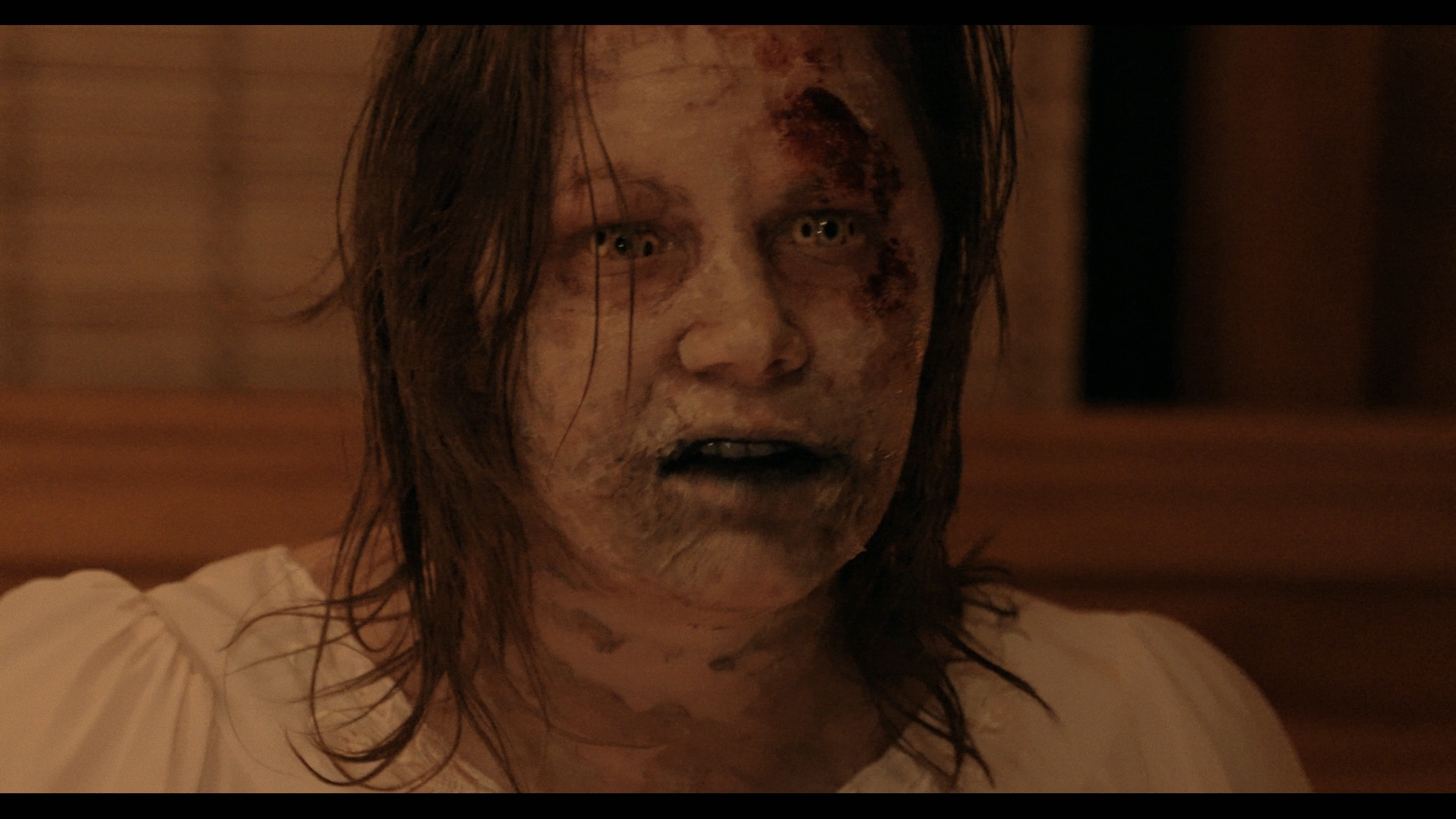 This is probably the best-looking Unearthed Films’ production I’ve seen on Blu-ray. Director of photography Chris Hilleke and director Stephen Biro have crafted a visually pleasing film with real clarity and sharp definition. For a no-budget horror movie, every dollar spent on the bloody practical effects look fantastic in 1080P video.

Distributed by MVDvisual for Unearthed Films, the main feature runs 85 minutes on a BD-50. It is presented at a 1.85:1 aspect ratio. The movie receives a steady AVC encode that smoothly handles the darker gradients and scenes with less lighting. There isn’t any macroblocking, even in the larger patches of brighter primary colors.

The palette is mildly warm, possibly with a slight magenta push. Even flesh-tones and stable black levels produce solid, consistent 1080P video. There are no substantial contrast issues. Detail is tight and abundant in close-ups, without revealing any filmmaker’s tricks needed for the practical effects.

The Song of Solomon looks rather nice for this kind of low-budget horror production on Blu-ray. Looking clear and sharp like many newer digital productions, it’s evident Biro wanted the excellent practical F/X shots to appear in crisp and clean detail.

The Song of Solomon has decent sound quality in the form of 2.0 PCM audio in stereo. There is adequate separation and fine imaging. The soundtrack, credited to four people, has its moments bolstering the demonic confrontation of the exorcism. The crunchy sound doesn’t lend itself to big dynamics. A few moments have mumbled dialogue. The independent production doesn’t have lavish audio design but is certainly serviceable.

MVDvisual distributes two different Blu-ray editions for The Song of Solomon. A pricey, limited collector’s edition includes the Blu-ray with a DVD copy, along with a soundtrack CD. The normal Blu-ray edition comes by itself in a standard Blu-ray case. The Blu-ray is marked for Region A going by the back cover, but I haven’t confirmed if it plays for other regions.

Two special features listed on the back cover and the press materials are actually missing on the Blu-ray. Interviews with actors Gene Palubicki and David McMahon are mentioned but do not appear on the disc.

Audio Commentary With Stephen Biro & Jessica Cameron – Writer/director Biro and lead actress Cameron give this fairly rambling commentary. This may be the first commentary which includes a dog making its audible presence known. There’s the occasional glimmer of insight behind the scenes but many will find it a tedious listen.

Interview With Actress Jessica Cameron (20:52 in HD) – The actress talks at length about her experience on set and working with Biro. She appears to have really enjoyed working on the project and excited to have been a part of the movie.

Interview With Writer/Director Stephen Biro (23:37 in HD) – Stephen Biro shares his background in horror filmmaking and Unearthed Films. Claiming to be a Christian, The Song Of Solomon was a more personal project for the filmmaker.

Interview With Special Effects Artist Marcus Koch (28:07 in HD) – Biro’s long-time F/X man discusses his history meeting the director many years ago and their films together. Some detail is given for the F/X work done on this movie.

Interview With Director Of Photography Chris Hilleke (35:15 in HD) – Hilleke covers the demands of filming practical F/X and gore seen in the movie, among other topics.

Behind The Scenes (70:22 in HD) – This lengthy documentary has extensive behind-the-scenes footage from the set, including exhaustive breakdowns of how critical F/X shots were pulled off. It’s a comprehensive look at the production as it was being made, with input from cast and crew. Aspiring horror filmmakers should watch it as a learning tool if they want practical gore.

Photo Gallery  – 161 still shots from behind the scenes

Full disclosure: This Blu-ray was provided to us for review by the label. For information on how we handle all review material, please visit our about us page to learn more about DoBlu’s editorial policies.

The Song of Solomon

The 15 unaltered images below have been taken directly from the Blu-ray. For an additional 13 The Song of Solomon screenshots, early access to all screens (plus the 14,000+ already in our library) in full resolution, fifty exclusive 4K UHD reviews, and more, support us on Patreon.