Book Club unlikely played well internationally, for no other than reason than trying to sell the distinctly puritan approach to sex in the west. Candice Bergen shouts at one point, “Stop saying sex!” as if the mere word is offensive.

Then comes Fifty Shades of Gray. As the group discusses their sexual encounters, Fonda selects the book and as a group, they turn embarrassingly red. “We can’t read that!” one of them shouts, as if their entire conversation wasn’t delving into the book’s sordid style.

Remove the double entendres and giggles about kissing (that seem more fitting for teenagers) and Book Club fits comfortably into the rom com mold. The women find men, they date, they have their downer breakups, and then realize their error. There’s even a run to an airport for the climax.

The twist is Fifty Shades, which will eventually place Book Club as a time capsule. That one time American women became ensnared by sexual deviancy and talked openly about it. In this case, it’s a foursome of 60-somethings, laughing and smiling. Outside of the sex chat, Book Club inspires. Life isn’t over at 60 or 70. Live a bit, get out there, and stop being shy about these things. It’s important, a bit of a breakthrough in terms of openness and the gasp-worthy realization that yes, people do have sex.

What’s a killer is how forced Book Club is. Much of the dialog sounds and is delivered with a pandering tonality. Every mention of sex is drawn out with the talented cast ooh-ing an aww-ing with every word. Also, while it’s great to see successful career women on screen, Book Club dives into fantasy, with the rich meeting the rich, hardly the relatable middle class characters meant for a wide audience. These people live in mansions, surrounded by deep blue pools and sultry greenery. At times, it’s exhausting to see them flaunt their wealth, even if their jobs rarely come up in conversation.

Like Fifty Shades though, Book Club has the benefit of at least trying to rip the spine out of American sheepishness. A bit of wine (or a lot of it actually) and a tawdry novel must be the activator. Maybe Book Club is the necessary push to complete things. 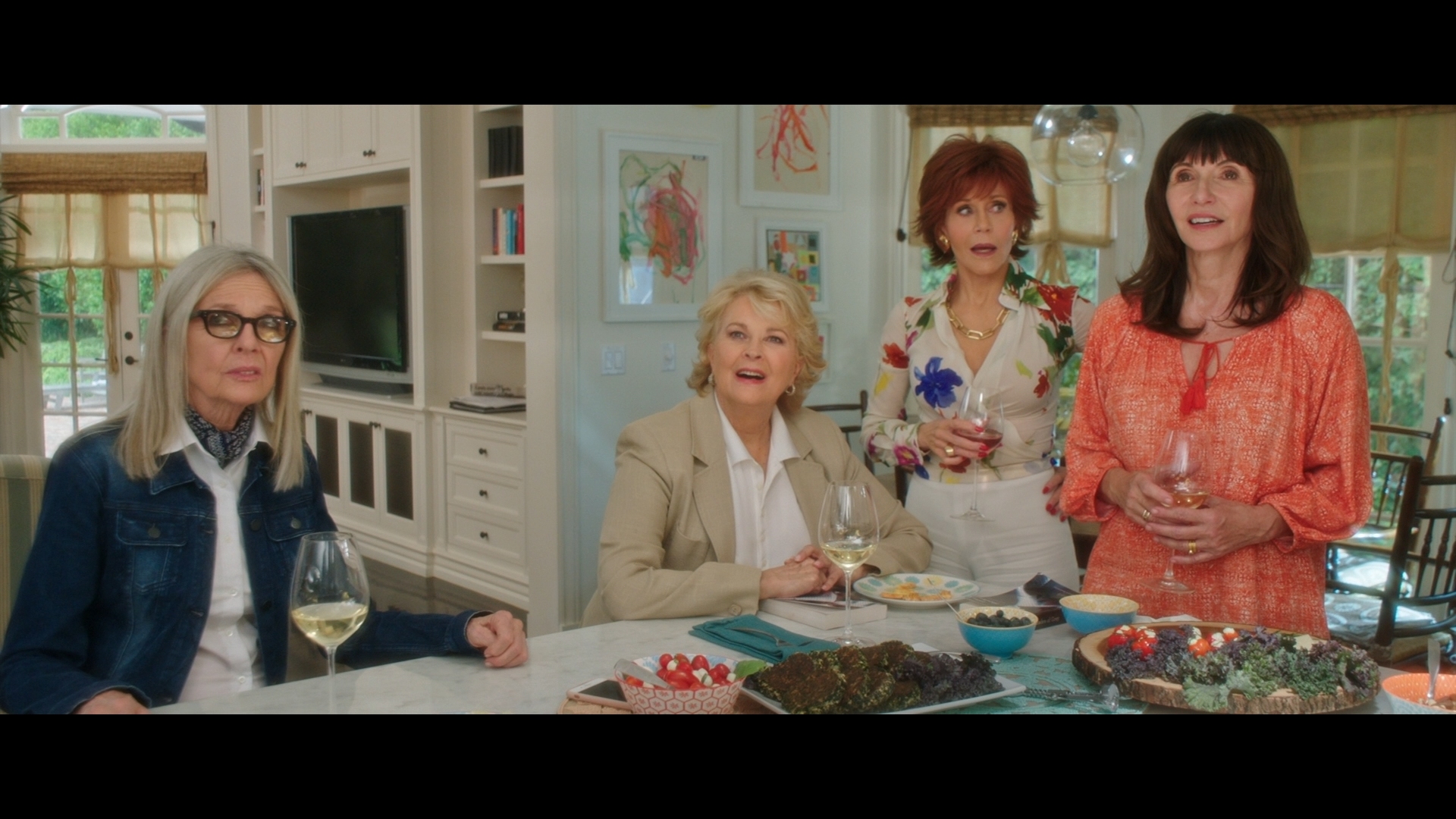 With a bit of softening haze to give Book Club a dreamy feel, this disc isn’t a detail showcase in most cases. Facial definition runs on the low side. However, the expensive houses and thickly decorated exteriors display superb fidelity. Flowers, brick work, bushes; all of that looks outstanding.

Color doesn’t hurt, with hearty saturation. Greens excel and do so often. All of those pools work in blues. Flesh tones carry a natural warmth, as does most of the palette. Book Club offers an inviting look that’s hard to fault.

Encoding does present some issues. Light noise is fine and hardly a problem. Some instances push too far. One shot of Andy Garcia poolside on his phone swarms with compression, blocking up his face. A bit of chroma noise is evident in spots too, but minor.

A better-than-average DTS-HD track gives Book Club a sonic liveliness. It’s all ambiance, but that’s expected. Still, having an active bar scene spread into the rears and a jukebox blasting tunes to the surrounds is pleasing. Scenes in restaurants and malls flood the soundstage with a pleasant sense of space.

All dialog sits in the center. There’s no spread of any kind to note. Music hints at some subwoofer use. For a rom com, it’s a fine mix.

Five featurettes make up a majority of the bonus features. The first delves into the concept and the origin of this project, mostly from the view of writer Erin Simms. A peek into casting goes as expected, and the setting of Los Angeles follows (odd since so much of Book Club is clearly green screened). The various themes and character motivations come next, and then a peek at the recording of the end credits song comes in last. A mix of extended, deleted, and alternate scenes finish things off.

Together, all of this runs around an hour total.

A loaded cast gives Book Club some marketing power, but it’s a derivative romantic comedy wrapped in a shell of honesty about sex.

The 15 unaltered images below represent the Blu-ray. For an additional 17 Book Club screenshots, early access to all screens (plus the 14,000+ already in our library), 50+ exclusive 4K UHD reviews, and more, support us on Patreon.