Empathy is a flaw in Predators. Anyone who dares to show compassion is certain to die on this alien planet, populated by a race of creatures determined to kill.

Predators – plural – relives the tension of 1987’s Predator. It’s a similar film, locked to a jungle with an unknown threat always nearby. That makes the script an unavoidable recycling, but in Predators, it’s the best screen representation of the lore’s Heart of Darkness cynicism. No one here is a hero. Each was selected by the Predators for their ability to maim, kill, and do so without sympathy. Predators like that stuff. So does the audience who keeps paying to see these movies.

Prior to the third act, it appears things will fall in order. The unnamed human combatants bond. They share pictures of their family and smile. Together, they share a common goal affixed to any person – survival. Pressure binds us as a species as necessity. Someone chooses to be kind. Then everything falls apart.

This is a sharp sequel in concept. It looks too clean though. Digital cinematography brings the core Predator series clarity, denying the scenery grit and weight. There’s also the weight of cliché. A burly Russian freedom fighter dies in a blaze of glory. The Japanese Yakuza enters into a visually interesting if abhorrently trite sword battle with his opponent, a point of cliche.

Things move slowly here. While this pushes a necessary dose of character development, it’s also Predators way of reintroducing the creatures. Including the Alien vs Predator series, this marks the fifth time where characters unravel the Predator puzzle. They hunt, people die. What’s missed, again, is Predator culture. These beings don’t draw interest because they kill, but why. That remains unanswered in the core series, unless, again, Alien vs Predator counts.

Predators finds clever, fresh things to do though. The various stare downs between Predator and human draw the eye in morbidly smart ways. There’s a great brawl between Predator species, a burly close combat fight composed with outstanding costume work and explosions.

Humans draw on videogame-like personalities, defined by their weapons. There’s the sniper, the shotgunner, the heavy gunner, etc. Each finds a way to duel in their own ways, livening up the third act after a chuggy first. Predators is sensationally cruel as it explores, however thinly, whether any of this is part of the human experience. Predators seems like an odd place to do that, but also, the Predator series is smarter than it’s given credit for. 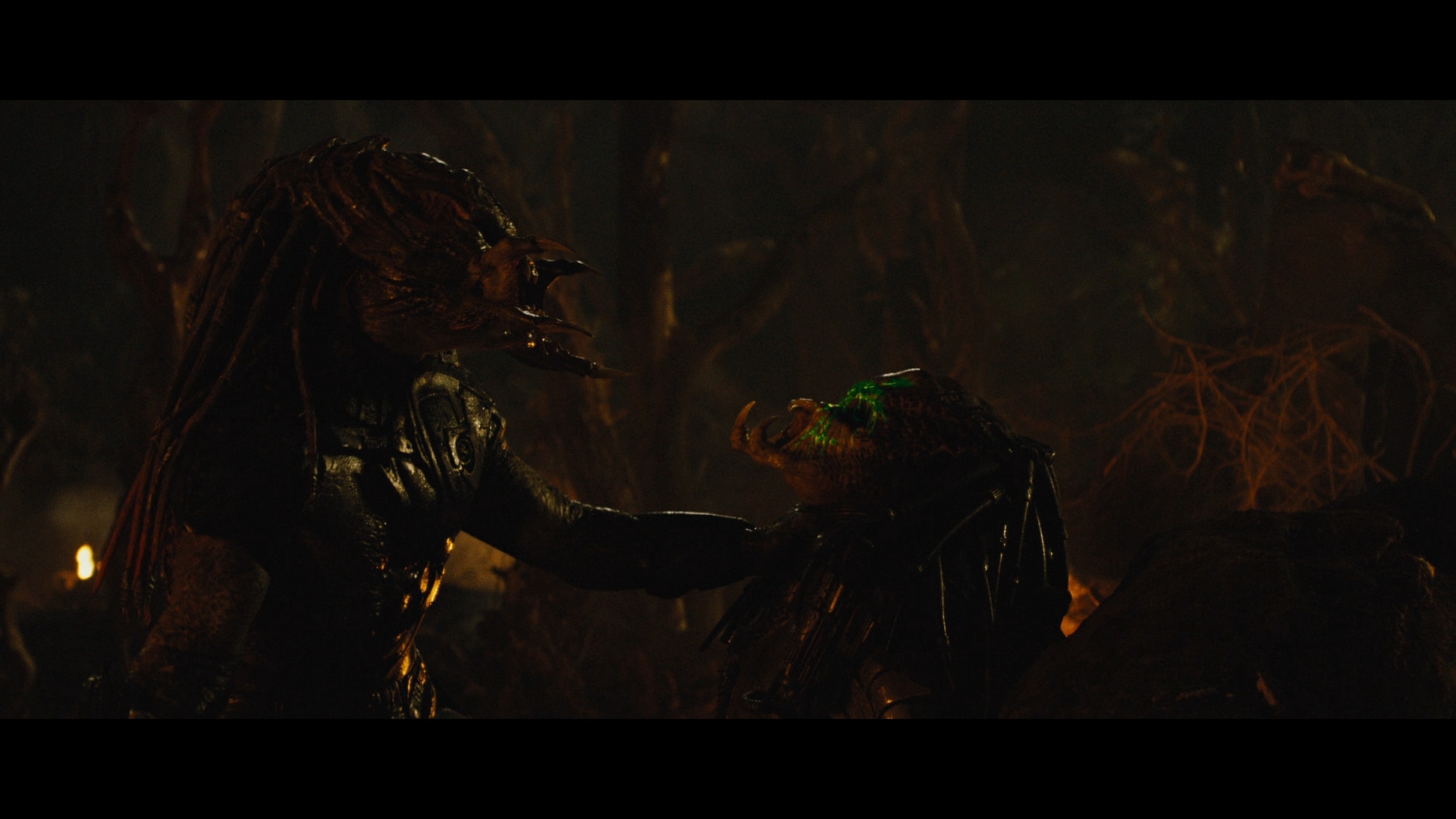 Predators is a 2K upscale. That’s okay given the clarity on display. Other than some vertical banding deep into the third act, Predators gives plenty of visual might to see. Hawaiian location shooting offers thick scenery, gorgeously defined by this master. It looks modern despite approaching a decade old. Facial definition provides needed consistency, and the lushness of the plant life is a persistently perfect backdrop.

The key here though is HDR. This is a heavy pass, letting light pass through the trees. Contrast soars. Whites pierce the screen with intensity. On the opposite end, shadows evenly clash, perfect at all times. By the end, when the sun sets, black levels take over. Even without the benefit of sunlight, Predators remains dense, and loses nothing to crush.

Cloning the DTS-HD track of the Blu-ray, Predators lacks the force and range of better mixes, but still has fight. There’s great material here, including boomy gunfire and bullets flying around the soundstage. When the camera first cuts in on Adrien Brody falling, wind hits all five channels with a nicely panicked separation. Direction is difficult to ascertain, as is appropriate.

In the jungle, ambient life chirps in the rears. Odd, considering not a single bird is seen on camera. There’s a small moment where a character throws a burning flare, beginning in the center, sliding into the front left, then into the left surround. It’s a great transition.

LFE support accentuates explosions and guns, beefy if not with the greatest of force.

On the UHD, director Nimrod Antal and producer Robert Rodriguez handle commentary. That’s shared on the included Blu-ray, where the rest of the extras sit. Key is Evolution of the Species, a great six part, 40-minute look at the production. The Chosen details the characters for a few minutes, and an EPK concerning the dogs sequence comes in next. Eleven minutes of deleted scenes and some motion comics come in last.

Predators enlists the help of Heart of Darkness as with the original, coming away with an uneven mixture of repetition and creativity.

The 15 unaltered images below represent the Blu-ray. For an additional 30 Predators screenshots, early access to all screens (plus the 14,000+ already in our library), 50+ exclusive 4K UHD reviews, and more, support us on Patreon