It’s hard to believe a decade has passed since WB Animation started their very successful line of direct-to-video animated movies starring DC characters. The movie that kicked it off back in 2008 was Superman: Doomsday. Back in those early days the movies had their rough edges, often making sacrifices to fit the constraints of animation with tight budgets. Coming off the popular Timmverse cartoons that had run the prior decade, no one really knew what to expect from the fledgling animation studio. Dozens of movies later, they are now an essential part of the DC experience. As the live-action theatrical movies get darker and more removed from the core of DC’s superheroes, the animated films have been a godsend for DC fans.

Superman: Doomsday was an abbreviated adaptation of Superman’s most famous comic book story, one that took many liberties with the original source material. It had Superman’s death at the hands of the unstoppable monster Doomsday, an unthinking brute engineered for one purpose, destruction. While a decent start to this line of animated DC movies, the movie was lacking in several critical areas for fans. Everything about it felt like the producers were pulling their punches.

The Death of Superman is WB Animation coming full circle. Going back to re-telling Superman’s iconic death, one of the 1990’s most well-known comic book stories, the movie does a much better job adapting the source material while respecting Superman’s more recent animated history. Meshing the New 52 continuity that DC rebooted with in 2011 while incorporating the epic Doomsday showdown, The Death of Superman is one of this year’s best superhero movies. It features the best animated superhero battle seen this decade as Superman clashes with Doomsday.

This Superman is a younger, more idealistic hero still making his way in the world

Superman’s fans in recent years have been a little apprehensive after the character’s perceived mishandling in Zack Snyder’s vision for his movies. That dark tone for the Man of Steel has thankfully been left alone in The Death of Superman. This Superman is a younger, more idealistic hero still making his way in the world. Taking a cue from the New 52 continuity, the movie acknowledges Clark’s past relationship with Wonder Woman. In fact, Superman has yet to reveal his secret identity to Lois in The Death of Superman. That development plays a pivotal role in the plot. Their relationship resonates with genuine feeling and emotion, a true rarity in DC’s animated output.

A bevy of star voice talent plays the lead roles, including Jerry O’Connell, Rosario Dawson, Nathan Fillion, Jason O’Mara and Rebecca Romijn voicing Lois Lane. Superman’s supporting cast of characters aren’t forgotten and have their roles to play in the drama. Lex Luthor (Rainn Wilson) is tracking an asteroid that crashes into our ocean. What no one realizes is that the asteroid is bringing the fearsome monster Doomsday to Earth. When the unstoppable monster savages members of the Justice League, including a beaten Wonder Woman, it’s up to Superman to save the day in what can only be described as a knock-down, drag-out fight to the death. The last act is non-stop action as Doomsday rampages through Metropolis.

Written by regular comics scribe Peter J. Tomasi, The Death of Superman is a smart update on a classic comic book story. There are a couple of cool nods, including the inversion of a line from Superman: The Movie everyone will catch. Some humor is sprinkled in to keep things light and the characters remain true to themselves. Fans will love the background characters that make an appearance, including a touching moment with Bibbo Bibowski, the Metropolis bar owner.

The Death of Superman is smooth, streamlined superhero storytelling for a new generation. It relegates Superman: Doomsday, ostensibly covering the same story, to a quaint memory. The post-credits scene sets up next year’s sequel, Reign of the Supermen. 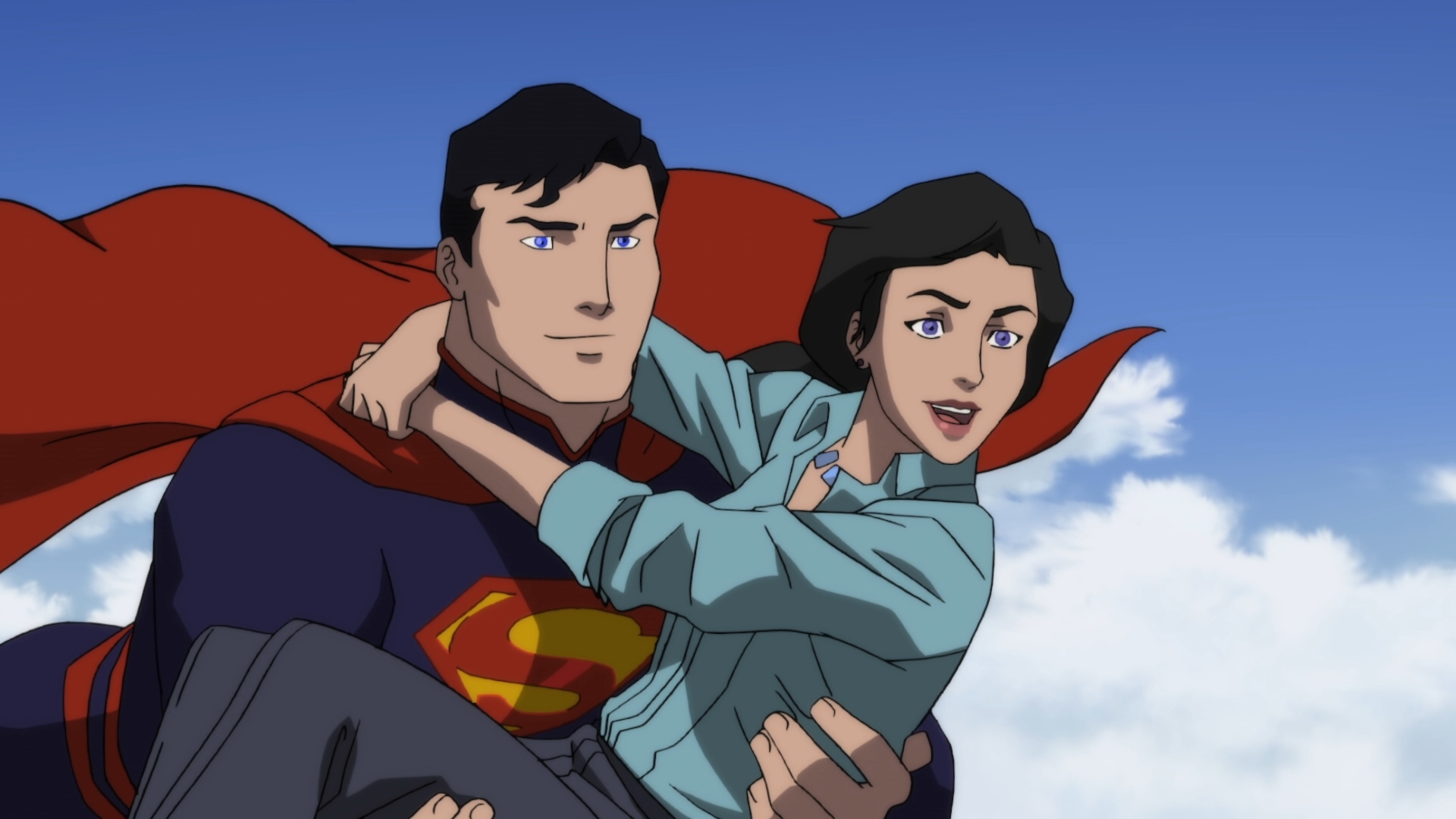 Let’s get this out of the way early. Yes, some banding and light posterization creeps into the otherwise pristine Blu-ray presentation. Warner has never particularly cared about wiping out the banding and their merely adequate AVC encode doesn’t really help matters.

Animated by a Korean animation studio, the movie has a mix of good-looking designs and some stiff character designs. Some minor CGI elements help add to the boldly colored two-dimensional animation. Judicious decisions have been made on the animation, putting more time and money into the battle scenes. The increased fluidity and detail are quite apparent as the action starts heating up.

The 80-minute main feature is encoded in AVC on a BD-25. This is an encode that rarely goes above figures in the teens. The movie is shown at its native 1.78:1 aspect ratio in 1080P resolution, the same resolution it was animated at by the producers. The main reason one would get the UHD version is for the increased compression transparency afforded by HEVC, which is far superior to the AVC available on Blu-ray. Most fans have complained that these animated DC movies don’t produce substantial benefits at 4K UHD resolution over the BD.

The animation has a vivid color palette and perfect black levels. It’s an immaculate presentation in terms of transfer problems, replicating the original animation in perfect clarity and reproduction. Some negligible aliasing is visible in the CGI elements when paused. The Death of Superman’s animation falls roughly in line in terms of video quality. The bright, bold primary colors of DC’s superhero costumes stand out in crisp definition.

Like many of these animated DC movies before it, the 5.1 DTS-HD MA soundtrack makes an impact in the front soundstage without offering aggressive immersion. The Death of Superman probably has more action than normal for this line. While the sound quality is crisp with clean fidelity, only the instrumental score gets wide support across all channels. Dialogue is smoothly balanced with the louder, more dynamic audio elements.

The Death of Superman is receiving a lot of attention from Warner’s marketing department. It’s an important release for WB Animation and is supposed to support a coming sequel. There is the regular Blu-ray edition, a Deluxe limited-edition gift set, a 4K UHD release, and exclusive steelbook versions for both BD and UHD at Target. This is clearly a marquee, high-profile animated release for WB Animation. The exclusive gift set at Best Buy includes the first four chapters of the new tie-in comic book in a graphic novel. The fanatic Superman collectors are going to have trouble tracking everything down if they want it all.

Let’s break them all down. The normal Blu-ray edition arrives with a DVD and Movies Anywhere digital copy, redeemable in HDX on VUDU and other MA providers. The 4K UHD release adds a UHD disc on top of everything in the regular Blu-ray edition, dropping the DVD. First pressings include the available slipcover, which is glossy and slick.

The limited-edition Deluxe set comes in a huge outer box. Inside is the regular Blu-ray edition with a cool Superman figurine produced by Gentle Giant. For those unaware, Gentle Giant is a top name in the premium toy industry. The figurine shows Superman with a battle-shredded costume. A perfect size for the desktop or school locker at slightly over 4 inches in height, it’s probably the best figurine DC has included with their animated movies. The Deluxe set is limited to 50,000 units, though good luck finding a pristine copy at retail. The neat thing about the Deluxe set is that you are guaranteed to get a slipcover in pristine condition, nestled safely inside the outer box.

A Sneak Peek at DC Universe’s Next Animated Movie: Reign of the Superman (09:33 in HD) – Like their prior home video releases, this featurette sells you the upcoming sequel in a pithy behind-the-scenes look. Its cast and crew, including some voice talent such as actor Cameron Monaghan voicing Superboy, go over the general idea of the movie and characters. It wouldn’t be an animated movie featurette without DC animation director Mike Carlin explaining the property, who seems to appear in all of them.

The Death of Superman: The Brawl That Topped Them All (16:23 in HD) – This is an interesting look at the iconic comic book issues that started this whole idea in the first place. Superman brawls with Doomsday to the death as the featurette goes through the panels by artist Dan Jurgens. The comparison from the movie to the comic book art is detailed and insightful.

From The DC Comics Vault – Legion of Superheroes: Dark Victory Part 2 (22:50 in HD) – The inclusion of these Superman and the Legion of Superheroes episodes gives us animation collectors hope that the 2006 series sees a Blu-ray release down the line. The show only ran two seasons and this is the first time I have ever seen it in HD quality. This is not a poor upscale from SD but in actual HD resolution. This two-part season finale from season two were the last episodes in the series. Unable to use the name of Superboy on the show over lawsuit wrangling, they instead had a young Superman take his place in the Legion. This includes all your favorite Legionnaires like Brainiac.

Trailers (03:24 in HD) – Trailers for Batman Ninja and Suicide Squad: Hell To Pay play in order.

UHD Promo (01:07 in HD) – This trailer precedes the main menu and can be skipped like all trailers on WB discs.

Full disclosure: This Blu-ray was provided to us for review by the label. For information on how we handle all review material, please visit our about us page to learn more about DoBlu’s editorial policies.

The Death of Superman

Another winning effort from WB Animation, this time improving the epic clash between Superman and Doomsday. It’s better than Zack Snyder’s Justice League, that’s for sure.

The 15 unaltered images below have been taken directly from the Blu-ray. For an additional 17 The Death of Superman screenshots, early access to all screens (plus the 14,000+ already in our library) in full resolution, fifty exclusive 4K UHD reviews, and more, support us on Patreon.