Draped in a muggy jungle against an unknown adversary, Predator’s strength lies in taking the experiences of Vietnam and exposing them for the PTSD-enduring nightmare they are. It’s sweaty, it’s hot, it’s uncomfortable. Worse, the paranoia, knowing an enemy waits among the trees, invisible, waiting to strike.

While Predator hardly exudes legitimacy, the overbearing muck that is the cinematography and well conceived chameleon villain blend into a potent concoction of ‘80s style. If not dead set in fear, Predator shines with vibrant, macho-laced chit-chat and popcorn antics. Predator is a movie that finds Arnold Schwarzenegger swinging from vines, shouting like Tarzan, bending tree trunks, and lifting cargo trucks. In-between rounds of genuine terror, Predator masks itself with an ‘80s bodybuilding video.

The mish-mash of elements is unique, eventually lost by every sequel and squandering opportunity. John McTiernan’s original Predator finds a clever means of extracting life from the monster movie formula. Brothers Jim and John Thomas pen a script at the heart of ‘80s action, finding room for explosions, but also dialed back to appreciate tension. Certainly, Predator is designed with men in mind. The demographic slant uses burly dudes spewing ammunition from healthy looking guns. By the end, it’s one-on-one, the two alpha males butting heads out of respect, roaring at one another.

Using gruesome gore, Predator cruelly hides itself in an isolated jungle. Bodies hang from branches, skinned and probably while alive. Chests explode. Heads splat like watermelons. Any pretense of respect for the dead is lost in this battle. Small scale as it is, the alien hunter with heat vision represents an entire nation, vicious and undoubtedly framed as a force of evil despite a sense of foreign culture. Sequels expanded this lore, but Predator’s screen intellect designs the framework.

One of the final shots is of Schwarzenegger, seated in a rescue chopper, looking over the jungle. Minutes before, he slung insults at his foe. Hours prior, he joked with his crew. That’s over. All that’s left now is the grisliness seared into his mind. It’s a telling shot, the smartest of Predator’s work, solidifying a Vietnam story in a digestible, popcorn chewing way. 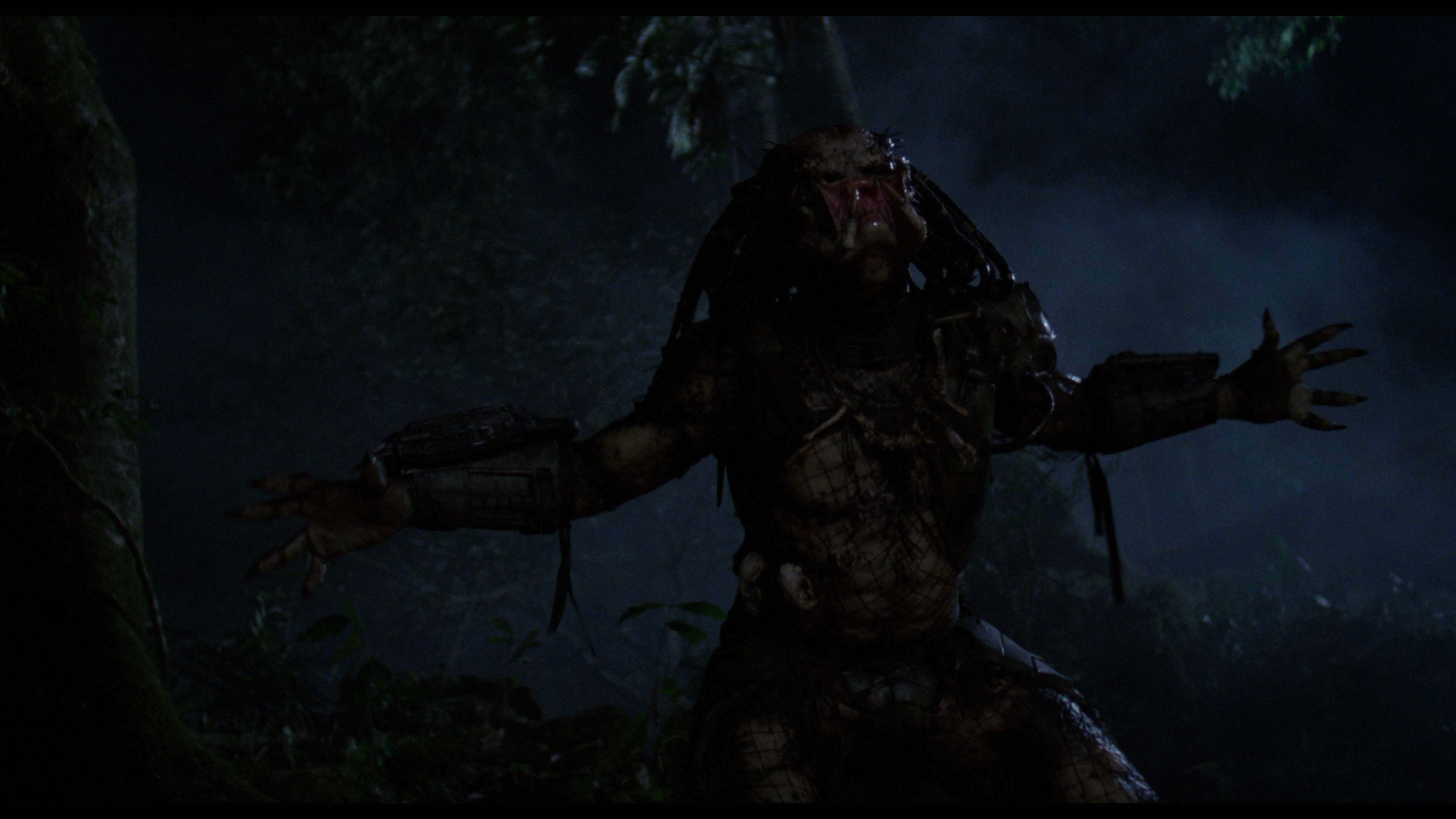 A decade later, fans of Predator can ditch the MPEG-2 Blu-ray edition. The 4K UHD release avoids the egregious sins of the wonky, smeary Ultimate Hunter Edition and restores the proper grain structure. Better, this encode does so cleanly, with natural grit and minimal sign of encoding issues. This transfer looks like film shot in a misty jungle.

Fox states this is a new 4K scan. That’s likely true. Predator lacks premium sharpness at its source, so going by eye only, a guess is the only possibility. What’s here looks outstanding though. Jungle scenery is resolved into the furthest depths of the frame. In close, facial definition stands out with natural fidelity. That goes for both low light and daylight. The print is without flaws. No specks or dirt creep in.

While the HDR pass isn’t super powered, sunlight seeping between tree tops offers intensity. Sparks and fire stand out when involved in a scene. Blood from the bleeding Predator carries a nice glow. Predator doesn’t go overboard. At times, black levels reach a touch too far, appearing to float over the scenery. This is most notable as Mac looks up at the full moon and remembers Blain. Shadows during those shots unnaturally bend and move with Mac’s face. That occurs a few other times too, but to a minor degree comparatively. Generally, black levels hold stability and density.

Deep color doesn’t touch up Predator, nor should it. Dusty and dry, the palette holds back without heavy saturation. Organic flesh tones capture sweaty faces without digital grading interfering. Greens stick out, yet remain softened.

The same DTS-HD 5.1 from the Blu-ray carries over to UHD. It’s capable, with unavoidable age. Outside of Alan Silvestri’s masterpiece of a score, audio loses range and succumbs to dryness. Dialog muffles and gunfire lacks spunk. Mid-range material sputters. LFE barely comes alive during the busiest action scenes.

Positional work livens things up though. Jungle animals call out from the surrounds for ambiance. A major assault on an enemy camp pushes gunfire into a multitude of directions, nicely layering the scene. Stereos split wide to keep the front soundstage active.

All bonuses except for the commentaries reside on the Blu-ray, which is identical to the Ultimate Hunter Edition – transfer included. A solo commentary from director John McTiernan is up first, with a text commentary from film historian Eric Lichtenfeld. A great making-of that’s been around for a while called If It Bleeds, We Can Kill It is worth watching compared to the usual promotional drivel.

Inside the Predator is section of seven featurettes, the best a retrospective on Kevin Peter Hall and his awesome suit work. A section on special effects splits into two parts, while a series of interviews called Short Takes contains four sections. Six deleted scenes are followed by a featurette titled Killers of Extreme Perfection, which is nothing more than a way for Robert Rodriguez to gush over the original as promotion for his sequel, Predators.