There’s much to extract from the slim frame of Walking Tall. Minus the end credits, the total film weighs in at 73 minutes, enough time for Dwayne Johnson – still billed as The Rock in 2004 – to rough up small town scum in a swell of masculine ideals.

What Johnson’s doing here is restoring that classic Mayberry, USA ideal. He’s slamming purveyors of smut and rigged gambling through tables. Johnson is in full WWE mode; that’s visible in his movement and style. Walking Tall’s mixture of Ford trucks, pro wrestling, strippers, and civilian justice is almost too abrasive to work. Women do nothing in this movie short of undress or sit off to the side. Again, an olden ideal. It’s surprising no women stand around in a kitchen for a few scenes.

No doubt Walking Tall is fun. Action scenes draw on an implausible yet colorful aesthetic. Seeing Johnson smash up a casino with a plank of cedar can never be dull. Guards drop in from upper floors because it looks cool, then Johnson blasts them with punches or smashes their bones. Walking Tall is as advertised and expected.

Even in 2004, Johnson’s muscular physique is an imposing screen presence

Johnson’s muscular physique is an imposing screen presence and his iconic charisma bumps up a typical action flick. Men want to be The Rock, so here’s a bit of projection. Walking Tall never surprises, but inherits a male fantasy that those sitting in an audience downing a bucket of calorie-laced, artery-clogging buttery popcorn can cheer for.

Violence is, of course, the answer to all here. Despite doing things right and running for office, Johnson’s stint as newly elected sheriff still comes with a wood plank in tow. He’s great at whacking stuff, whether inanimate or animate. Walking Tall is meant to be inspiring – take back your town from drug pushers and corruption, because someone has to.

Watching Johnson huddle in a crawl space while bullets tear apart the sheriff office doesn’t look too appealing when considered in the real world, but in the final shot, smoke filters out from the mill, sitting peacefully across the river. Production is alive again. American jobs came back. Idealistic, with a fantasy quality that pushes Walking Tall toward a testosterone-led fairy tale. Or, back to when America was great again. It just takes one man, a bunch of murder, and slot machine smashing to get there. Or, the country could adjust and progress after the system takes down an obviously corrupt casino. That seems more sane, if not as guiltily enjoyable on screen. 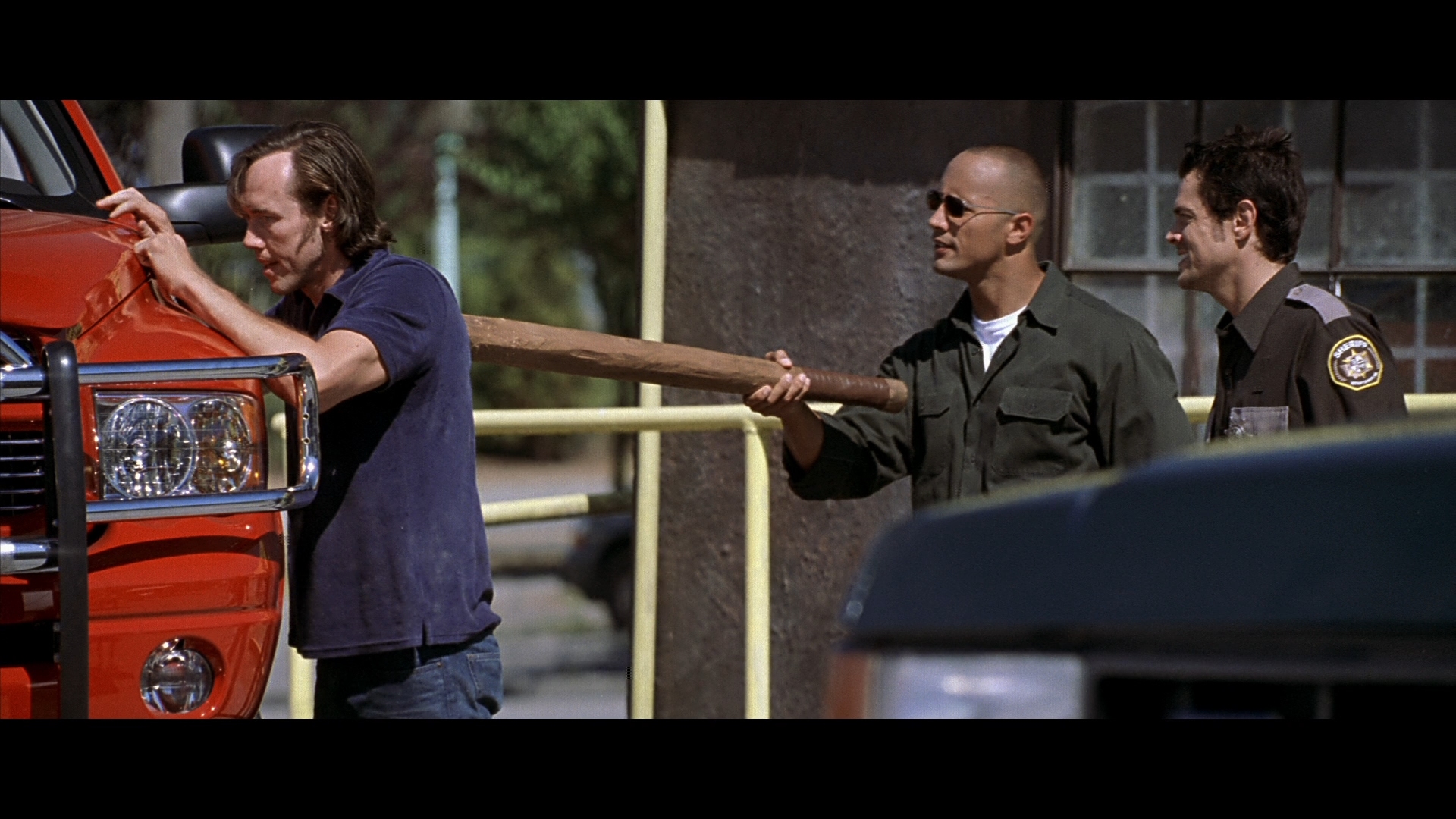 MVD’s Marquee Collection drops Walking Tall onto Blu-ray with a mid-tier transfer. It’s old, that much is clear. Signs of minor filtering intrude. Grain smears slightly. A touch of sharpening muddies medium shots and traps the resolution. Grain pops up aggressively and in darker scenes, the messy encode can’t keep up. Noise ends up swallowing the screen.

Other qualities help. The color spectrum remains bright and natural with solid greens and accurate flesh tones. Little is happening here in terms of color grading. Walking Tall sports a palette of strong primaries, all natural, and without any overzealous new tampering.

Contrast and blacks help too, perky and with a stable, consistent sense of depth. A touch of crush on occasion is acceptable given the density of shadows. And, while the print used suffers numerous small imperfections (dirt and scratches often leave their remnants), condition holds out. Walking Tall needs another scan and some touch up.

A routine and dated DTS-HD mix joins the action. Typically, this front soundstage-led mix uses the stereos for basic pans. A few conversations drop into the stereos as well. Clean separation is admirable. If surrounds kick in, it’s for ambiance inside the casino. Even a vicious machine gun attack late doesn’t offer much in the way of positioning.

Fidelity lacks clarity, with slightly washed out dialog and overall low volume (also the note the out of sync subtitles that run a second or more late). Muddy LFE barely accentuates shotgun blasts and one explosion causes no reverb of note.

Johnson steps in for a solo commentary, a fun track given its age and where he was at this point in his career. The second commentary brings together the crew, beginning with director Kevin Bray. Director of photography Glen Macpherson and editor Robert Ivison join in.

A dated eight minute featurette follows the fight scenes and their construction. Three deleted scenes and an alternate ending are included individually. A blooper reel is brief (under a minute) but holds a gem as Johnson inadvertently smashes himself into a wall.

Dwayne Johnson stars in Walking Tall, a take-back-America revenge flick with plenty of testosterone and punching.

The 15 unaltered images below represent the Blu-ray. For an additional 12 Walking Tall screenshots, early access to all screens (plus the 13,000+ already in our library), 50+ exclusive 4K UHD reviews, and more, support us on Patreon.