While the timeline of events will forever be lost to historical mystery, Senator Ted Kennedy drove off a bridge and his passenger, Mary Jo Kopechne, died underwater. As for why the mystery, Chappaquiddick lays out a twisted PR campaign, beset by lawyers manipulating media sources, controlling information, and resetting the events. It’s all corrupted, an attempt to save face of a popular politician while the victim fades behind a chaotic news cycle.

Chappaquiddick cautiously approaches the scenario. Ted Kennedy (Jason Clarke) is depicted with an empathetic touch. The Kennedy legacy is an unseen character, leering in the background as Kennedy attempts to conceal truth. What matters to him is keeping his father proud and not soiling his brother’s name.

In that sense, Chappaquiddick leaves itself up to the audience to judge. Ted is not a hero; he’s criminal. His cover-up is less about his own fate as much as it is the family’s. That alters perception insofar as Chappaquiddick remains aware of the reality – behind all of this is a woman who cruelly died, and the circumstances will never be known. Through the swell of deception, Chappaquiddick brings all into question, even that which is (supposedly) real.

With a wider view, it’s a story of how men dominated a decade of social progress. Mary Jo died, yet the men in power become the story. They controlled all, brushing aside a body to save themselves. While Kennedy jumps into politics because of his father, there’s also a sense of internal panic. Clarke’s performance is careful. He considers resignation, but declines when the opportunity to remain in his Senate seat becomes a possibility. How selfish this all seems.

Although taking place over a single week – the same week Apollo 11 landed on the moon – Chappaquiddick delivers a swarm of insight. It’s a peek into the crudeness of American politics, their games, and how wealth saves those in power (Kennedy is given, literally, a room full of lawyers). There’s the media, given scraps, reporting with limited options in attempt to scratch at the truth. They fail, mostly because no one was telling the truth.

It’s a relevant story to resurface now. Maybe not in the sense of involuntary manslaughter (for which Kennedy was on trial for) but in terms of seeking truth from calibrated politicians and holding them accountable. Chappaquiddick and these events still offer much to learn. 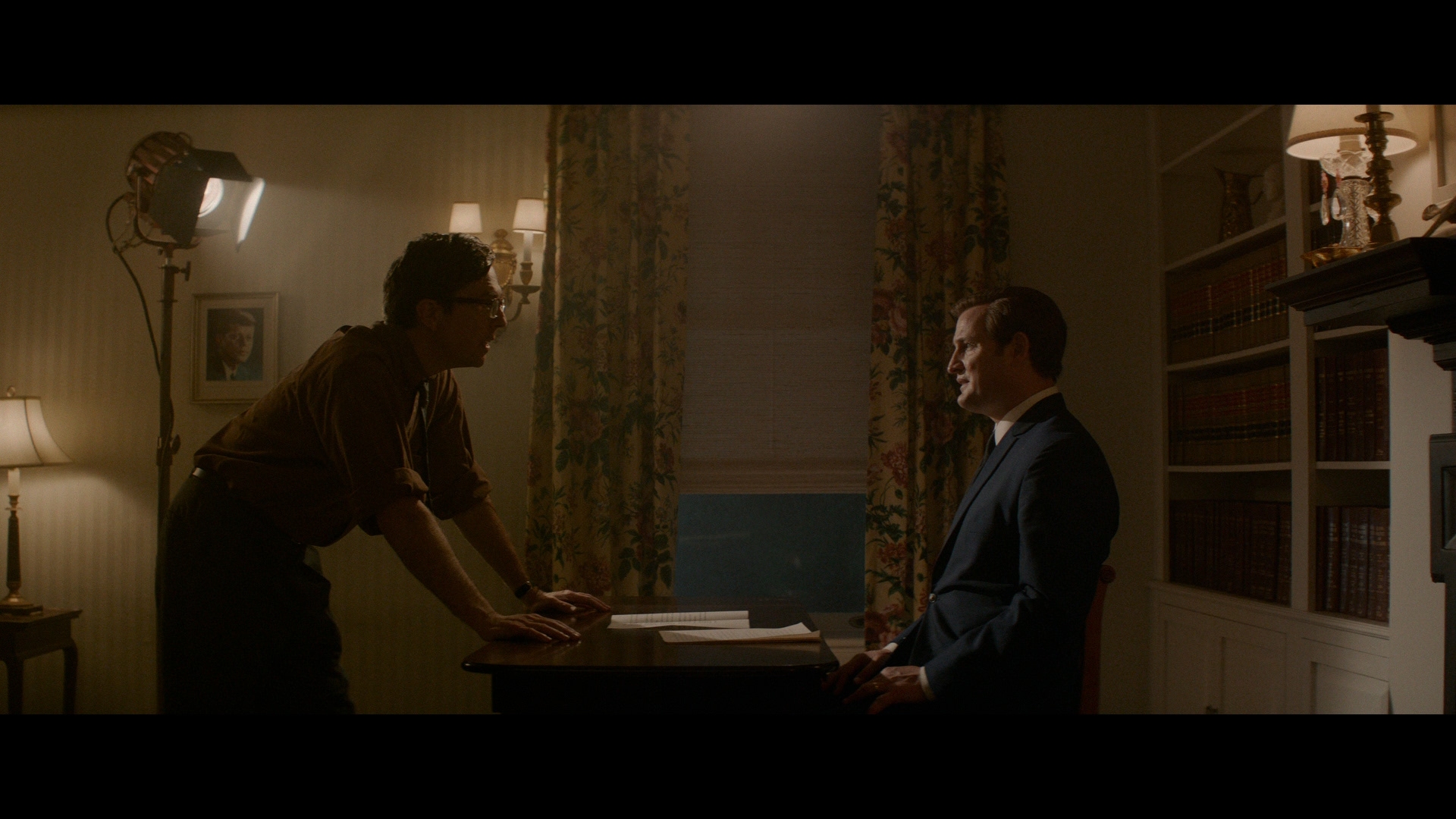 Resolution delivers definite sharpness. Facial definition wavers slightly, but stands out. Medium shots resolve as well as close-ups. Aerial views of the town keep fine lines in view without aliasing or other fault.

Slight crush leads to some dominating shadows. That’s minor though. Contrast is natural otherwise, with bright highlights and deep blacks. The key night sequence is bathed only in moonlight, with stellar work to maintain balance and visibility.

Color sways, although fond of a warmer orange palette. Early on as Kennedy attends a party, the oranges fill the screen to a nearly gaudy degree. That settles later, fading toward a muted, cool style as pressure mounts. That looks appealing and vintage.

A few voices sprout in the stereos, but that’s generally it for Chappaquiddick’s use of the soundstage. That’s not unexpected for a political drama. What matters here is dialog clarity, well managed to keep the center channel lifted and natural. Balance is sublime between subtle conversations and intense deliberations.

There’s a rocket launch at one point. The subwoofer ignites for that. Kennedy’s crash into the river spreads water around the soundfield, a small moment of activity in a film that hardly needs accentuation.

The core making of, A Reckoning, runs 25-minutes, delving into the script, the politics, and the eagerness to tell this story. It’s well done. Bridge to the Past is unique as it deals with the editing process and how director John Curran was closely involved.

Political lies, corruption, and careful PR are highlighted in Chappaquiddick, following a tumultuous week after Ted Kennedy killed a member of his campaign.

The 15 unaltered images below represent the Blu-ray. For an additional 19 Chappaquiddick screenshots, early access to all screens (plus the 13,000+ already in our library), 50+ exclusive 4K UHD reviews, and more, support us on Patreon.