This isn’t one for cat people. In Isle of Dogs, vicious cat owning politicians exile canines to islands of trash, demeaning the creatures to sway public opinion. The eternal struggle of cats versus dogs, now played on a political venue.

Of course, Isle of Dogs isn’t so simple. Director Wes Anderson is all over this one despite a team of stop motion animators bringing it all to life. Japanese dogs end up on Trash Island because of dog flu. While curable, the anti-science conservative party rules, and thinks the solution is isolation, away from any city. On the mainland, protests for and against dog-kind sprout up. Rigged elections keep the cat-loving, anti-science party in power.

Isle of Dogs is an odd bit of cinematic quirk, a carefully morbid fantasy that stands in for contemporary immigration policy. Because of Wes Anderson, everything plays out as if lensed by Akira Kurosawa; the international flavor is bold and saturated. From the score to untranslated Japanese dialog, Isle of Dogs wrings out a foreign culture to speak on Western ideology. Odd, but so is everything from Anderson.

There’s so much to soak in, from the lively mishmash aesthetic blending past and future to the core tenant of the story

This is not an idealist fantasy. It’s not fit for Saturday morning either. Despite the wickedly sharp comedy, the takeaway from Isle of Dogs is entirely ferocious. Dogs starve. After being dropped onto the island, they can’t escape their cages. Isle of Dogs approaches the scenario with a glimmer of wit as to not upset a dog-friendly audience. Others find themselves subjected to experiments, living their lives crippled and in abandoned buildings.

That sounds harsh. It is. But that sense of somber mood intermixes with Isle of Dogs surreality. It’s quite clever. There’s so much to soak in, from the lively mishmash aesthetic blending past and future to the core tenant of the story – a young boy who simply wants his dog back. That’s universal, told with as many watery eyes as it is wacky smiles.

Artful composition keeps this story moving, avoiding mundane dog humor (no butt sniffing, etc.) for something wittier. A team of strays form divergent personalities, acted with class by the likes of Edward Norton and Jeff Goldblum, making them readily identifiable even beyond their visual designs. How wonderful this voice acting team is, paired with sharp, observant scripting.

Even when posing as unwanted immigrants, Isle of Dogs’ has the heart of a dog. It’s a film about the desire to be wanted, to have a soft bed, tasty biscuits, and a personal heater. The same as any person, really, bringing them equal to us. They understand people. It’s a shame when people don’t understand them. 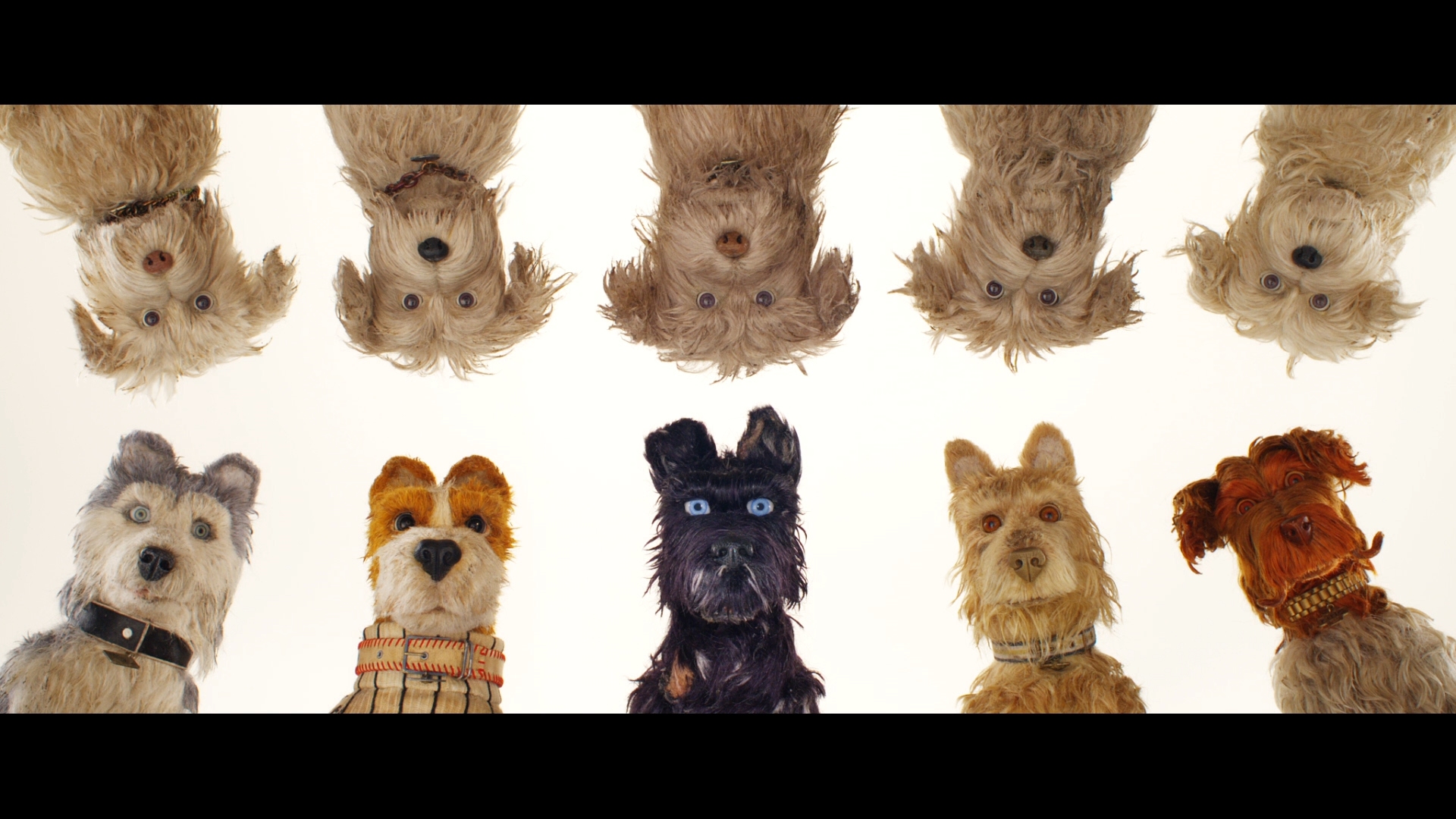 What a gorgeous presentation this is. Isle of Dogs is not an easy compression gig. The scenery of Trash Island is strewn with objects, busy at all times. Nothing is lost though, delivering on the potential of absolutely clear, precise video without flubs. Even at the most potentially strained – whether that be extreme color saturation or crammed scenery – not a single artifact pops in.

Per the traditional Wes Anderson style, the use of color is gorgeous and prominent. Every scene features a different color signature, flaring with potential yellows, reds, and blues. High saturation blooms beautiful arrays, giving a bold life to the animation.

Photography embraces sharpness, pulling out tight definition and detail. Fur looks splendid, and the scattered objects placed in the miniature environments stand out. In close, even human characters reveal precise texture. These puppets were not quickly molded. Parts of their personality show through in their visual touches. The Blu-ray doesn’t fail in delivering minutiae.

Quaint and simple, the DTS-HD track marginally accentuates this often quiet outing. Dialog stands firm in the center with a few moments of separation in the front soundstage.

Directionality tightly restricts itself, used only when absolutely needed. A few explosions push debris into the rears. Those also pop in the sub with a small, almost adorable burst. Soft song selections strum clear guitars into the mix. It’s a mix perfectly suited to a film of this nature.

This section is a bummer. The six promotional featurettes run a handful of minutes total, and other than seeing some office dogs, there’s little to take away.

Wes Anderson crafts a love letter to canine friends in Isle of Dogs, while also dabbling in issues of immigration and anti-science ideologies.

The 15 unaltered images below represent the Blu-ray. For an additional 45 Isle of Dogs screenshots, early access to all screens (plus the 13,000+ already in our library), 50+ exclusive 4K UHD reviews, and more, support us on Patreon.