Whatever happened to mid-budget b-movies from Hollywood? They became increasingly squeezed out due to Hollywood’s growing economic reliance on tentpoles and blockbuster franchises. Sequels and franchises are more predictable for the money men funding Hollywood today. It’s questionable if a sci-fi movie like The Terminator could get made today under Hollywood’s current business model.

The star-driven Future World (no relation to the 1976 Futureworld) is a throwback in that sense. Clearly made for home video and aimed at a slightly older audience familiar with its cast, this is disposable sci-fi competently made to turn a quick buck. It is a star-driven sci-fi vehicle for co-writer and co-director James Franco to let loose with a group of his friends, known for his acting chops more than his nascent filmmaking career.

Starring everyone from Franco himself to Milla Jovovich, Snoop Dogg, Lucy Liu, Method Man, and Suki Waterhouse, Future World is haphazard dystopian sci-fi in the mold of Mad Max and countless other post-apocalyptic action thrillers. It’s fun if you can check your brain at the door and block out all the Mad Max similarities. Carelessly tossed together from a mishmash of disparate sci-fi movies, this is b-movie fare through and through with a few memorable scenes. Nothing here is particularly original. What you get is pleasantly enjoyable direct-to-video fodder made for the rental market.

I haven’t come to bury Future World. This is a film that’s not going to receive much positive coverage from critics and even many normal viewers are going to think it’s a miss. The plot is derivative and the characters are thin. Some of the story borders on exploitation, which in all honesty are the more intriguing elements. Snoop Dogg plays a pimp that runs a brothel in the desert. Knowing its intended audience, Future World embraces that setting with plenty of gratuitous violence and nudity.

If headliners like Milla Jovavich and James Franco had been in a movie together back in 2008, it would have been a major summer event. Franco’s star has been diminished over the years by increasingly erratic indie work and #MeToo accusations. However, Future World provides one of the more memorable cinematic moments of 2018 in a ridiculously over-the-top fight trading punches between those two one-time movie stars. The plot likes dabbling in serious questions like AI and self-aware robots, even if Future World’s larger framework is fairly predictable post-apocalyptic action. This is a b-movie that has no pretensions it’s anything but a b-movie, reveling in the daring physical stunts and cheesy characters.

In Future World’s post-apocalyptic misery, a land that suspiciously resembles Mad Max’s dry wastelands, a young prince from the Oasis boldly ventures out of safety and comfort to find medicine for his ailing queen and mother (Lucy Liu). Along the way he gets mixed up with a baddie appropriately named Warlord (James Franco) and Warlord’s gang of Raiders. Warlord lords over his new pick-up, a robotic concubine Ash (Suki Waterhouse) that must follow his demented commands. Ash’s struggle for freedom from Warlord’s despotic rule propels Future World forward.

Milla Jovavich looks like she’s having immense fun playing the leader of a drug-crazed community. Her demented portrayal is probably the highlight of Future World’s zany acting performances. She still brings that on-screen charisma that propelled Resident Evil into a franchise. Lucy Liu is given prominent billing above the marquee but her character only shows up for a few brief scenes.

The real female lead in Future World is Suki Waterhouse. Playing Ash as a confused, synthetic humanoid robot yearning to break free from her programming, it’s the one character the movie takes seriously. Ash has a couple of interesting scenes that sketch her development from robot to independent creation, including one where she’s taught to pray and learns the concept of a soul.

Future World isn’t great by any means and most of it has been seen before in sci-fi entertainment. But the solid action and interesting performances make it passable sci-fi fodder worth catching for less-demanding b-movie fans. 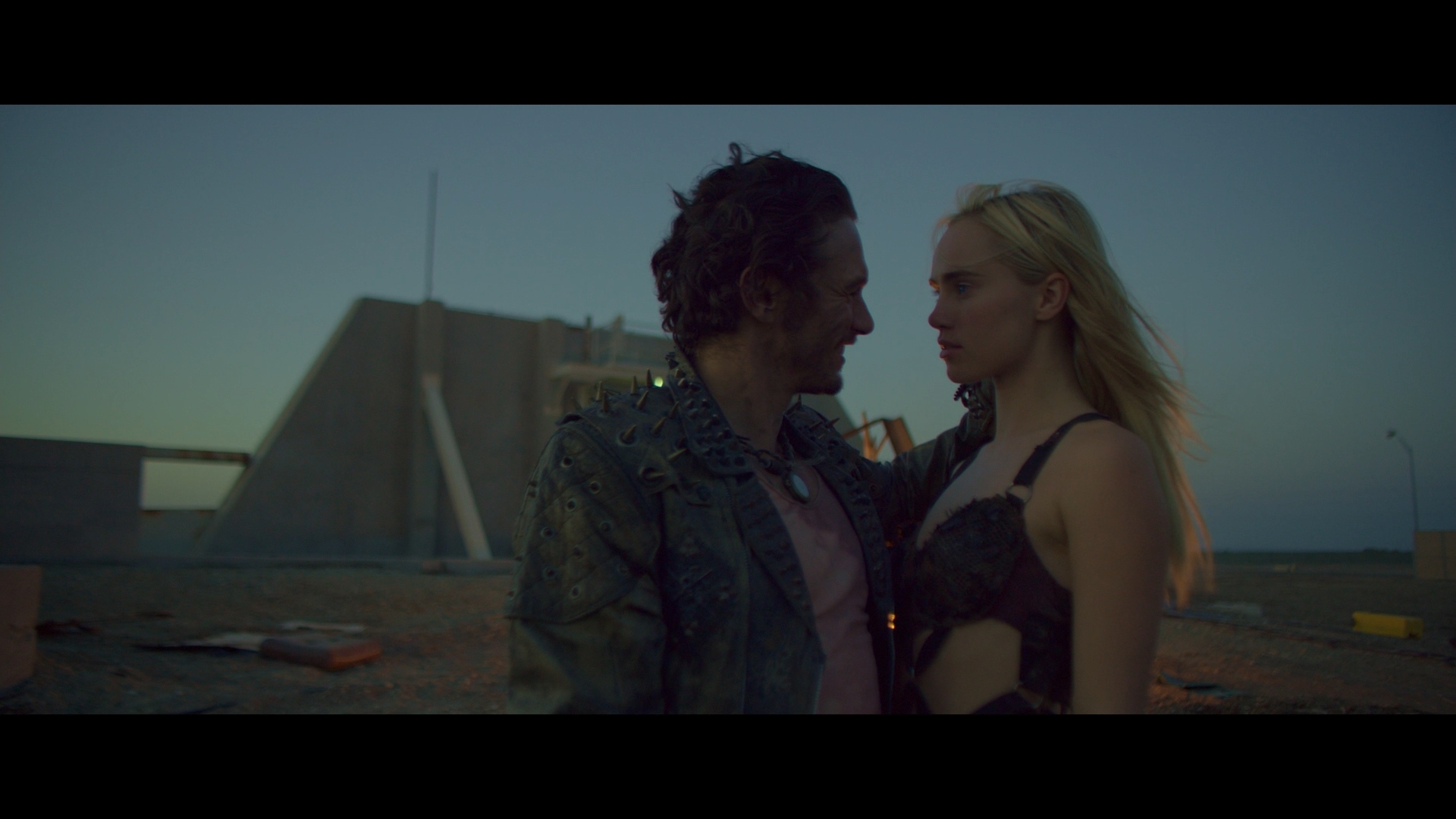 There isn’t much overt processing manifest in the transfer, but much of the movie receives an evolving color grading. It’s not a smooth or consistent color grading, making its presence known in several scenes with big changes in luminosity and temperature.

The 1080P video, shot by cinematographer Peter Zeitlinger, offers decent clarity and strong definition in the hotter exterior landscapes. Problems in the picture quality mount in darker shots, from noisier backgrounds to possible banding in the AVC encode. The action stunts and battle scenes actually have more vivid clarity than many of the quieter dramatic moments.

The 88-minute main feature is encoded in serviceable AVC on a BD-25. Lionsgate has never updated their AVC encoders over the years and compression artifacts remain in difficult material that isn’t completely clean and pristine.

Future World looks okay most of the time in high-definition but this is not the digital perfection of a big Hollywood production. This Blu-ray has fairly average video quality for a new 2018 release.

Directional cues pan and move across a wide soundstage. Explosions ring out with proper impact and the roar of motorcycles come to life when the Raiders take charge. While Future World may not be particularly original as a movie, its soundtrack delivers excellent separation and tight fidelity in a dynamic package.

Lionsgate serves up one featurette with James Franco as the only significant special feature for a movie largely dumped in the dog days of summer. Lionsgate remains one of the last studios still using UltraViolet digital copies. This Blu-ray includes a UV digital copy redeemable in HDX on VUDU.

A glossy slipcover is available.

Future World: Behind The Scenes (12:39 in HD) – Actor/co-writer/co-director James Franco sits down for a brief interview on the film, interspersed with lengthy clips from the movie that illustrate his talking points. He delves into the creative process and discusses some of the bigger cast members. It’s a pretty weak featurette that could have been cut down several minutes if the film clips were removed.

Lionsgate Trailers (09:02 in HD) – A gallery of skippable trailers both precede the main menu and can be selected from an option in the main menu. The trailers include The Show, Spinning Man, Bent, Extortion, and Inconceivable.

The unaltered images below represent the Blu-ray. For an additional 10 Future World screenshots, early access to all screens (plus the 12,000+ already in our library), exclusive 4K UHD reviews, and more, support us on Patreon.