Released to large format theaters in 2015, the Robert Redford-narrated National Park Adventures adores the sights of America’s parks system. Numerous canyons, rivers, mountains, and other gorgeous locales find their way into view through this short documentary. It’s all worth celebrating.

National Park Adventure was too quick though. It wasn’t until 2017 a new administration began cutting away at budgets and protections for these lands. National Parks Adventure makes a slightly more depressing statement now knowing fewer care to preserve this beauty. In a historical anecdote, there’s mention of turn-of-the-century loggers who cut through the Redwood forests. With rollbacks, things begin to slide back to those careless days.

Most IMAX documentaries inform. This one doesn’t necessarily. Following a small group of people as they tour much of the western parks, the footage forms the narrative. Redford takes a break to discuss groundhogs and bears, but generally provides minimal context. Nature does the heavier work through its mere existence.

There’s educational value still, just reduced. The goal of National Park Adventures is to entice potential visitors not with droll commentary, rather the imagery. Nearly all of the cinematography does that. Immensely scaled fly-bys of the Grand Canyon or Yellowstone form a picturesque travelogue of sightseeing beauty.

Arguably, it’s a counter-intuitive documentary. Cinematography achieves views impossible for the average visitor. The allure of the IMAX format stirs a better-than-reality style. Stay home, watch this. It’s cheaper too, if not as exhilarating. 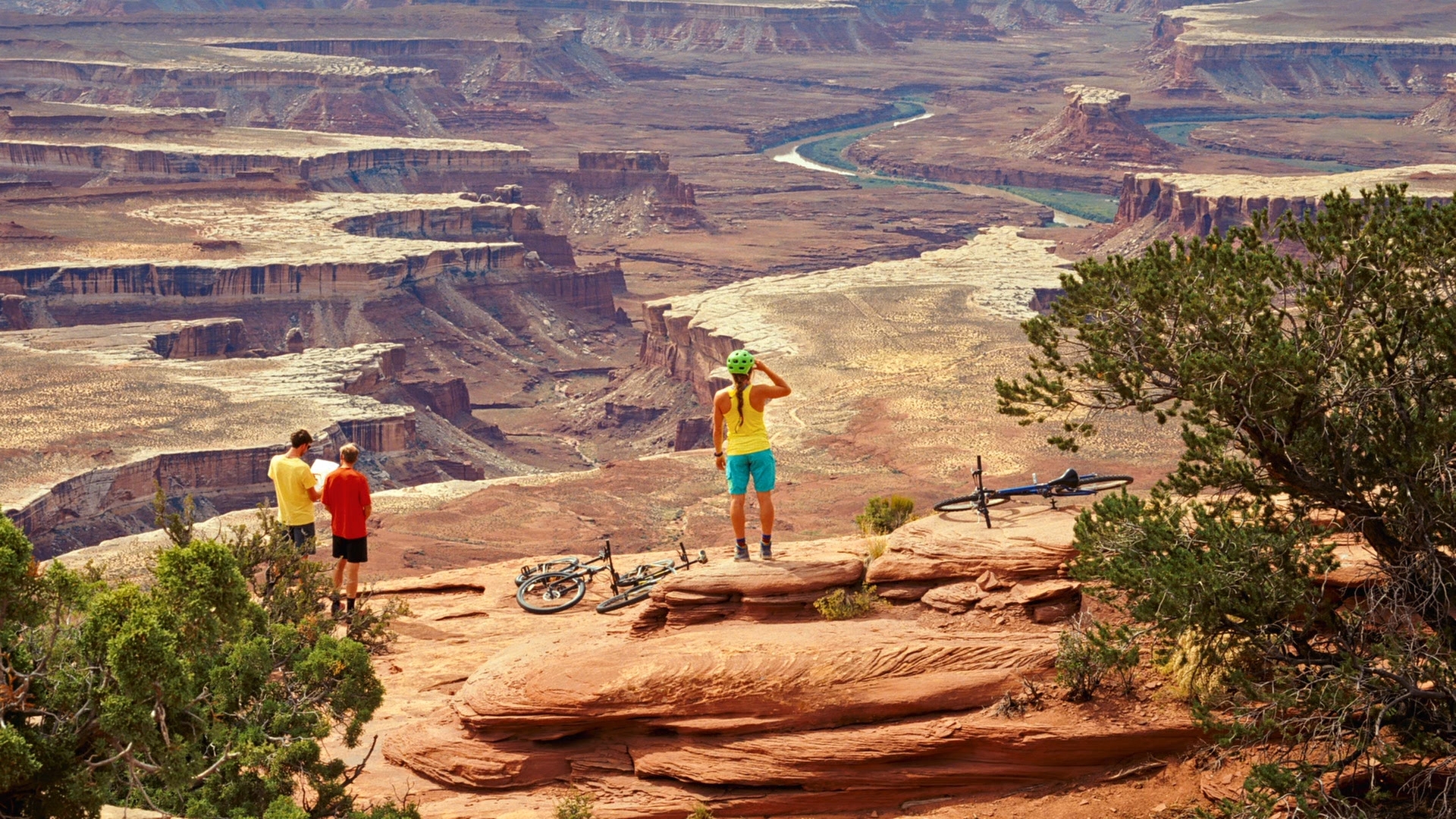 It’s difficult to pick one of National Park Adventures’ assets to focus on. The unbelievable color, contrast, and depth deliver reference tier material.

In Yellowstone, the heated waters breed colorful bacteria, hitting the screen with dense greens and blues. Out in the rockier areas of the west, red canyons collide naturally with beefy blue skies. The combination is absurdly perfect. Greens of forested areas reach a new format peak.

The HDR pass is not a subtle one. Sunsets sizzle on the horizon with deep, meticulously calibrated shadows delivered to the camera. Black levels do not disappoint. Intense, natural sunlight gives all it can to keep the imagery hearty.

A few instances of aliasing do pop up, slightly distracting as some bikers ride along rock formations. Otherwise, the 4K source produces preposterous levels of sharpness. A close-up on a prairie dog captures every sliver of fur. Distant shots of mountains reveal the tiniest rocks resting cliffside. Remarkable stuff.

Some of these 4K sights stretch the capabilities of Blu-ray. Aliasing pops up on occasion, taking away the organic beauty. Rocks and trees both cause issues, if to a small degree. Other times, National Park Adventure appears overly busy. As campers inventory their equipment near some trees, artifacts and imprecision create problems.

Luckily, the rest is outstanding. Bright color and vibrant contrast pair to perfection. Splendid detail maintains clean definition of various wildlife and the wide angle shots. No processing is applied to this IMAX footage, allowing it to breathe organically.

In 3D, National Park Adventure swerves all over. The scene mentioned above where campers detail equipment looks spectacular. A second later as they enter a car, there’s no visible depth at all. Flat aerial views of say, the Grand Canyon, butt up against close-ups of rivers that appear to stretch for miles. It’s shot-to-shot, either flawless or utterly lacking.

Don’t fall for the default audio mixes if you have Atmos-enabled equipment. The Blu-ray moves to Dolby Digital 5.1, the UHD to DTS-HD.

That aside, this is an active outing, willing to spread dialog into the surrounds. Even musical selections push vocals to the rears. Forests offer ambiance, while rivers flow between speakers effortlessly. Consistent use of the soundstage, even if it is, at times, artificial, extends the depth and pairs with the imagery.

LFE engagement adds to the fury of a forest fire and rushing waters. A few claps of thunder strike well too. Don’t expect blockbuster tier material, but for a documentary short, it’s well managed.

Six individual making-of featurettes – running at the most two minutes – offer no play all option. That’s annoying, and the material isn’t good enough to justify the back-and-forth between menu/featurette. Robert Redford adds short thoughts on his love for the Parks system, again under two minutes. After that, it’s just trailers.

A beautiful travelogue, National Park Adventure uses the IMAX format for its best potential to sell people on these natural sights.

The 15 unaltered images below represent the Blu-ray. For an additional 17 National Park Adventure screenshots, early access to all screens (plus the 13,000+ already in our library), 50+ exclusive 4K UHD reviews, and more, support us on Patreon.