Blockers is far too direct in its message. Liberal-minded conversation jabs the culture imbalance between young men and women’s sex lives. No human beings, under pressure, have conversations that direct. Blockers think they do.

Directness isn’t needed. John Cena, Leslie Mann, and Ike Barinholtz sell the absurdity through their performances. As a trio of concerned parents, learning of their daughter’s plan to form a sex pact, they bumble through the city in an attempt to stop the inevitable. Their stupidity and panic speaks earnestly.

Blockers’ sensitivity is unusual for the genre

Unlike Superbad (for which Blockers inevitably draws comparison), Blockers deals primarily with the parents. It’s their story, stemming from fear and embarrassment. With puritanism in their eyes and terror in their hearts, these three collide with a progressive, open sex culture. For laughs, they do so in crude and awkward ways, up to and including rectal beer chugging. Another is watching other parents using their free time… well, freely through a window. Nothing is private in the world of Blockers, least of all the lives of college-age teens.

Director Kay Cannon treats the situation with appropriate empathy between extreme comedic bits. The kids engage with their own fears and concerns, organically so compared to the awkwardness of the parents. Blockers’ sensitivity is unusual for the genre. Also, welcoming. It’s a shame there’s an R-rating attached; Blockers speaks with empathy for an audience going through an awkward stage of their lives.

That R-rating isn’t without its uses. Blockers isn’t a consistent riot, but does find timing and dialog to satisfy those looking for a goofy sex comedy. From a wider perspective, watching the sex comedy mature from the madcap Porky’s to this shows Hollywood’s expansion of perspectives and values. Blockers doesn’t spread nudity over the screen for titillation. Rather, this exaggerated reality satirizes helicopter parents and engages with difficult transitions into adulthood. And, it does all of this well. 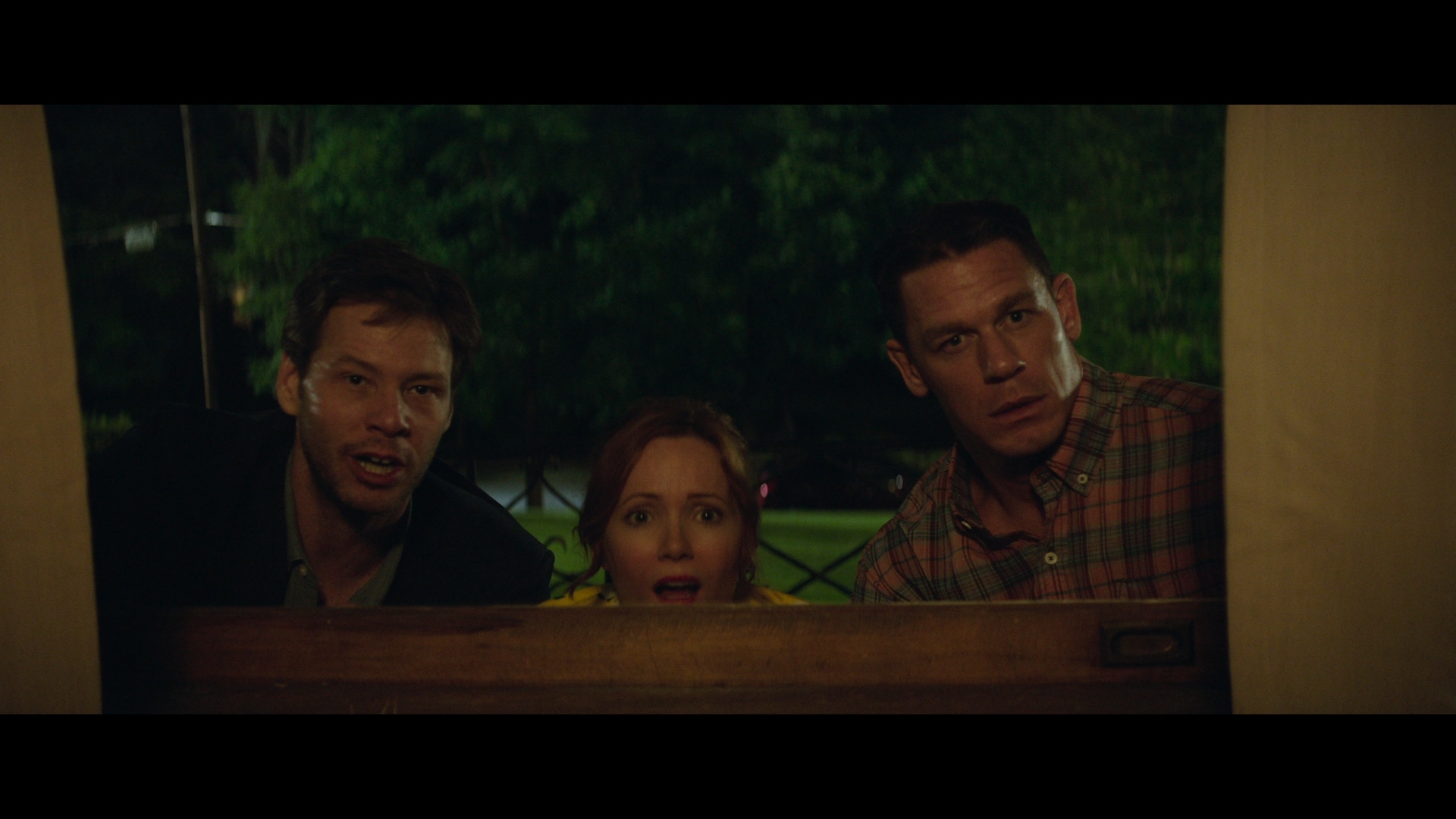 All of this passes to fine detail. While a number of close-ups resolve facial definition, listless cinematography fails to lift things beyond a dull standard. Medium shots read soft, lacking precision. Overall sharpness never catches on.

The savior is color, slightly yellowed and warm, but pleasing. Blockers carries the look of spring with sharp saturation and stout primaries. Color density gives life to plentiful greens and reds, prominent in the palette.

Fitted with a DTS-HD mix, Blockers doesn’t have an interest in showing off. Surround use holds back, used to marginally stretch the soundstage during parties. Prom spreads the ambient music around as an example, a rarity in this restrained 5.1 mix.

Dialog won’t budge from the center. At least it’s clear and consistent, even if that’s a low expectation for a studio film.

Kay Connor offers thoughts over a commentary track, doing so without any help. A few deleted scenes add little but have a few bright moments. A gag reel is joined by a line-o-rama and puke-a-palooza. Those contain comedy gold.

Two EPKs offer nothing worth seeing. An in-character John Cena PSA is great though, and a look at the beer chugging sequence is likewise wonderfully amusing. All together, the package is basic, short, and good for a few gags.

Blockers hits on its message with exagerrated directness, the downside of an otherwise important sex comedy.

The 15 unaltered images below represent the Blu-ray. For an additional 11 Blockers screenshots, early access to all screens (plus the 13,000+ already in our library), 50+ exclusive 4K UHD reviews, and more, support us on Patreon.