Never is Rampage intelligent or smart. It covers the stupid with plenty of boom-boom, crumbling buildings, and monster brawling though. That’s what the entrance fee is for – to watch giant monsters bust stuff up, even punch each other. Rampage is based on a videogame although that barely seems to matter. The important thing is a slate of attractive visual effects and the wickedly morbid sense of humor cutting through these 90-minutes of pure Hollywood escapism. This is the stuff popcorn was made for.

Read our full review of Rampage for more.

Update: On 7/3, LG issued a firmware update for my C6 OLED. This update was meant to specifically address some concerns with Dolby Vision. After rewatching Rampage with this new firmware, the score is increased by one. While other concerns remain, most notably the bothersome artificial grain, black levels significantly gain in density with this new update. Contrast also reaches better performance than before, with richer highlights. These changes do not, however, affect the Blu-ray edition and that score remains the same.

Warner provides a Dolby Vision pass for Rampage. It’s a bit of a downer. Lacking in boldness, the presentation comes off as flat, missing oomph. As the effects first pan around space to open Rampage, the lack of true black visually says something is amiss. Space is more gray than black. Few scenes offer pure, rich blacks. Generally, Rampage’s cinematography is matched with dusty, dulled shadows.

Contrast isn’t much better. Highlights sag up until a few shots late into the third act (scenes of a bomber nearing Chicago go in the opposite direction: nearly blinding). All of the sun-lit visual effects break from the norm of clouding things in darkness, yet the end result is dampened by mediocre brightness.

More still is the encode from Warner. Rampage features an artificial grain structure with consistent thickness throughout. Compression passes the sniff test, if barely. Noise levels just miss an agitation point. To its credit, the encode does handle the increased activity from dust and smoke. Overall, there’s a coarseness to Rampage. Dare it be said gamma was slightly brightened overall for the home release?

Luckily, there’s detail galore. Close-ups produce immense definition. This goes for the human and digital characters both. Spectacular skin texture and fur detailing pair the live/digital footage seamlessly. While sharpness gives up the reality of a 2K master, there’s enough fidelity to go around. 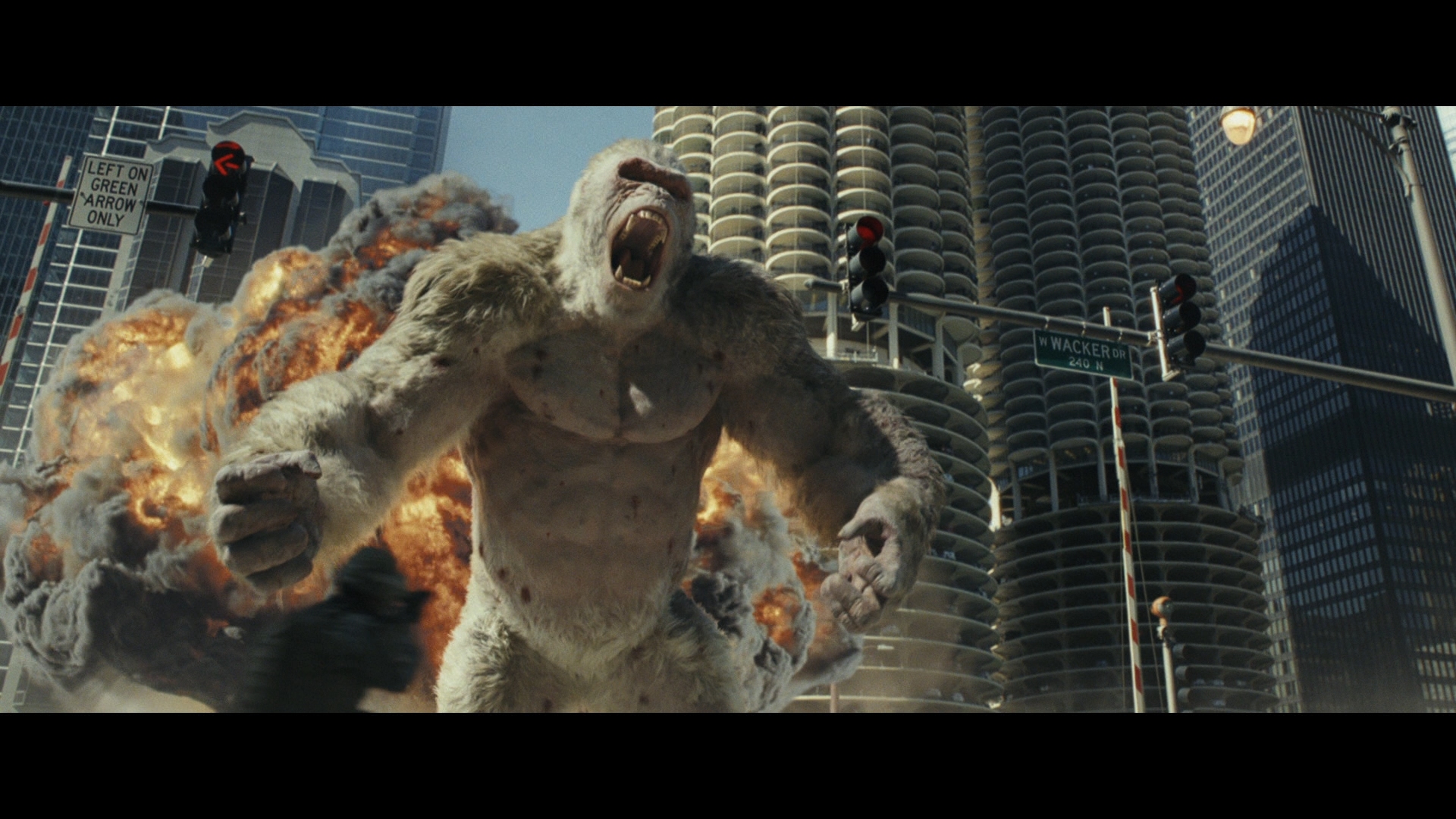 All of the issues on the 4K disc protrude here. If black levels sink to gray on UHD, they droop lower still on Blu-ray. Watch when George is first discovered in the bear enclosure. The cave he’s hiding in veers into a blue hue rather than a convincing shadow.

Noise rides high with the encode in a persistent struggle. Banding creeps in on occasion, trying to fend off the haze of dust as buildings collapse. That’s not a success.

While those issues remain in the 3D edition, they fall away when under the trance of this superb 3D conversion. As Lizzie leaps to munch on a plane, the depth of her mouth is quite chilling. Action scenes full of aerial battles accentuate placement of helicopters. Looking down on Chicago onto the streets, buildings stretch toward the front plane with deep, recessed fall-in effects.

Forgive the visual concerns. The Atmos mix (defaulting to DTS-HD in the menu) makes fine work of the possibilities. Dynamic range pushes remarkable depth in the low-end, giving scale to the action. George smashes his way out of a pen with spectacular LFE response. The strength of this mix is something to behold. As a plane goes down in flames, the roar as said aircraft passes delivers the necessary jolt. By the time buildings start coming down, the rumble shakes down whatever is left on the walls.

Precision use of surround and stereo channels keeps monsters roaming about. As soldiers first encounter Ralph, he wanders around the soundstage, plotting his move. Gobs of military action pops up all over Chicago, firing shots in each channel while the speakers fill with debris. Chaos is handled effortlessly, drenching viewers in sound from a convincing, pleasing summer blockbuster outing.

Ten minutes of deleted scenes offer a little exposition, minor at best. A routine gag reel trails the first featurette, Not Just a Game Anymore. Cast and crew remember the game they grew up playing while providing a bit of context for the movie adaptation. This one runs six minutes.

The following four featurettes all last about 10-minutes each. There’s Actors in Action following the stunt work. Trio of Destruction dives into Weta’s involvement, with Attack on Chicago details the final battle. Finally, there’s Bringing George to Life, detailing the mocap process. Most of these rise a step above EPK material, if barely.

The 15 unaltered images below represent the Blu-ray. For an additional 27 Rampage screenshots, early access to all screens (plus the 13,000+ already in our library), 50+ exclusive 4K UHD reviews, and more, support us on Patreon.