Kidnapping terrorists? Through the Vatican? Kinky.

While absurd, the end point of Mission: Impossible III lies entirely with the Bush era. The corrupted American IMF seeks a weapon meant to track Middle Eastern buyers, all for the chance to ignite a war and install a forced democracy. Chilling, really.

Of course, that’s an endpoint. More of an afterthought in a movie like this. Mission: Impossible III begins the full transition of this series into an energized, well constructed action series to counter the mayhem of Bourne. The two franchises, distributed by rival studios, collide here. Tom Cruise’s Ethan Hunt, on the run from the agency that again turns on him, features much of the fender colliding, skyscraper leaping, and desperation notable in Bourne.

Mission: Impossible III though is infinitely more lively. Finally, there’s a touch of self-referential humor introduced to this series. Characters realize the sheer absurdity of their actions. Once there’s a heist into the heart of the Vatican in the first act, anything left is fair. So it goes, with drone missile strikes, helicopter chases, playing in traffic, shoot-outs, and brawling. Mission: Impossible III offers a dash of everything Hollywood adores in its action.

While hardly an intellectual challenge, the script dodges some cliches. Thandie Newton is gone after her stint in Mission: Impossible II; Michelle Monaghan takes over as Hunt’s love interest. Not much is gained. She’s still a target for enemies and a goal for Hunt, a dull damsel with no motivation. Thankfully, Mission: Impossible III avoids the grand cliché. Hunt keeps his spy service a secret. There’s no argument when Monaghan discovers the truth. She accepts it. Move on to the next sequel.

Behind the camera, JJ Abrams directs a film with kineticism. Too much so, in some cases. Nauseating shaky cam dots much of Mission: Impossible III, at times effective (watch the increase in shake as Hunt endures the countdown at the start), but other times limiting focus. On top of the explosions and speedy tracking shots, following Cruise’s stunts is all the more difficult.

Thankfully, performances can carry themselves over the shaken camera. Philip Seymour Hoffman, even with limited time for development, stands as the series’ top villain. His calm under pressure exceeds even Hunt, making him a capable foe. What he lacks in physicality, he overcomes with presence.

The entire cast is pure though, enough to find the first true emotion of this series. There’s empathy for once. A dead IMF agent serves as a catalyst, creating authentic stakes as opposed to the expected “heroes always win” mentality of the previous two. In this case and in this alternate American timeline, Ethan Hunt stopped the Iraq War. Kudos to him. 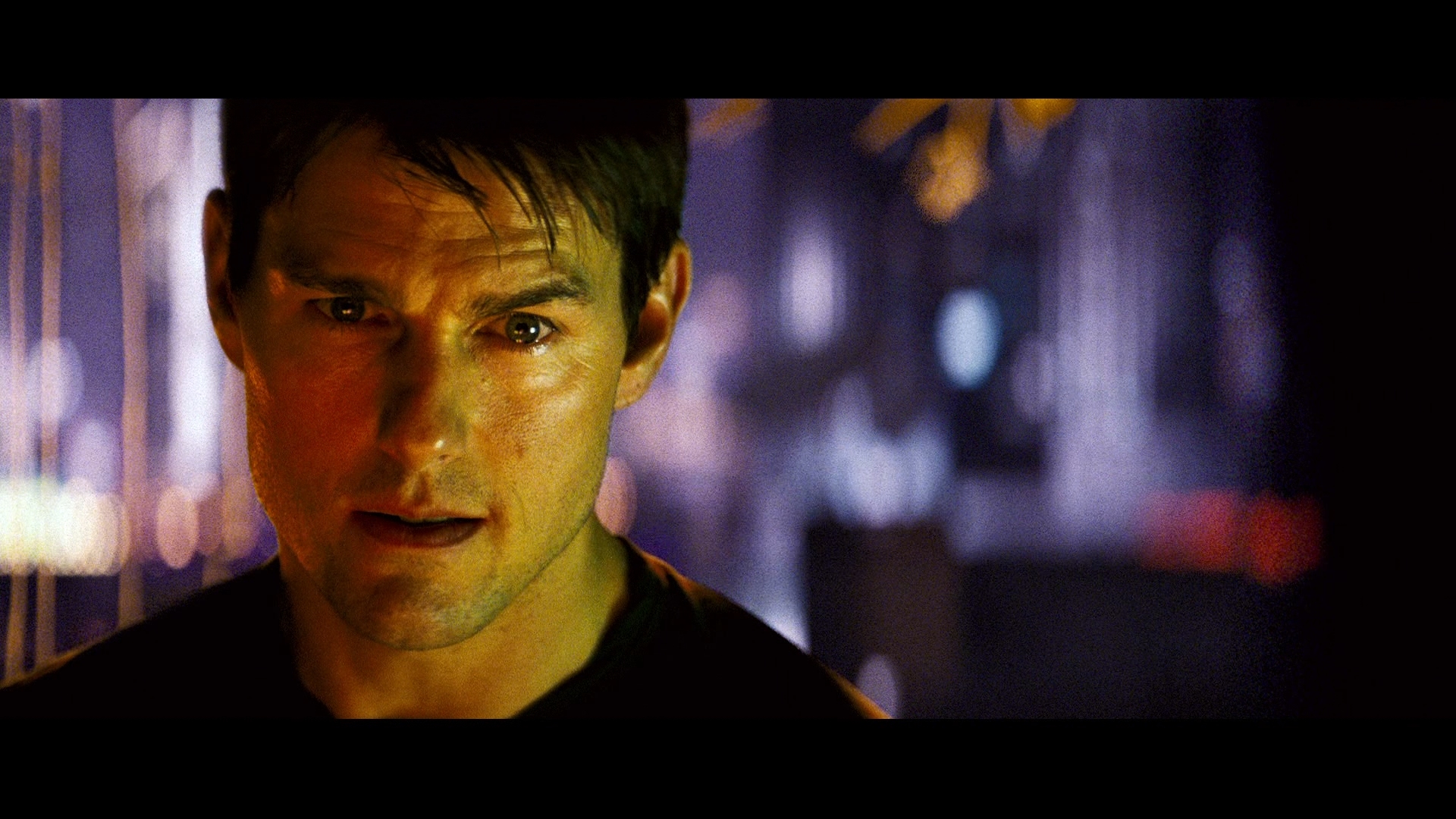 This looks like a 2K scan. While the level of fidelity is above acceptable, the sharpness doesn’t relay the level of tightness a 4K scan brings to the eye. Going in with that expectation, Mission: Impossible III still delivers essentials. Facial definition rates high and shots on location in Shanghai appear gorgeous. That goes for the city and small villages.

If there’s concern, it’s for black levels. Crush is dominant, a shame for an HDR pass. An early helicopter chase loses the choppers in the nighttime skyline. Black jackets and shirts mold into the background. Cruise’s dark hair does the same.

That’s a loss considering the vibrancy evident elsewhere. Aggressive contrast pushes life onto the screen with intense highlights. Explosions light up, but scenes in Shanghai – with the plethora of neon – sprout vividness. Even dialog scenes offer dimension in tightly concentrated form.

Coming from 2006, at the beginning of the orange/teal era, Mission: Impossible III restricts color. It’s an either/or situation; either it’s all blue or all orange. Variations exist (including a yellowed finale), but the palette is under restriction. Still, it’s attractive. It’s remarkable what deep color can do. Even if flesh tones move toward pale or super heated, Mission: Impossible III finds a way to make that appealing.

Paramount’s encode causes no visible issues. A few grain spikes pass by cleanly. The core grain structure is the lightest of the film-based entries. At times, it’s hardly visible and thankfully not due to any processing.

This is better. After two okay is below par audio mixes, Mission: Impossible III uses the full capability of the soundstage from a TrueHD 5.1 mix. This is the first of the UHD entries to embrace the power of explosions and fireballs. LFE support drops low, smoothly accentuating the action.

Expert positioning excels during a helicopter chase. Rotors whip around and missiles fire off in the appropriate direction. Without even seeing the screen, it’s easy to note where the shot is coming from. Mission: Impossible III’s highlight comes during a bridge assault, with high-powered guns catching the attention of the low-end, then firing from the rears. There’s a drone in the air, sweeping above and around. A couple missile strikes add their own heft.

Also of note is a scene in which Hoffman is dangled over the open cargo hold of a plane. Not only does wind fill in each channel, the debris being blown around is exceptional.

Tom Cruise gives his first commentary for the series here, joined by JJ Abrams. This track is shared by the UHD and Blu-ray. An additional Blu-ray includes the rest of the bonus features. Making of the Mission kicks off the disc, nearing a half hour in length. It’s a great piece. Inside the IMF lasts 21-minutes falls back to the DVD era, a generic EPK. Delving into the setpieces, Mission: Action goes for 25-minutes and provides the needed detail. Pre-vis looks at the various stages of production, from animatics to set footage and the finished product. Those who enjoy looking at physical prop making need Mission: Metamorphosis, looking at the mask creation.

JJ Abrams brings his summer popcorn style to Mission: Impossible III, making the best thriller of the series to this point.

The 15 unaltered images below represent the Blu-ray. For an additional nine Mission: Impossible III screenshots, early access to all screens (plus the 13,000+ already in our library), 50+ exclusive 4K UHD reviews, and more, support us on Patreon.