Funny how some movies end up accidentally prophetical. Here’s an action flick from 2011 with a deep-rooted fear of nukes, critical of American intelligence agencies, leery of Russian influences, and concerned with nuclear trades in the middle east. All that’s needed is a news chyron scrolling along the bottom.

Ghost Protocol goes for the all-out approach, a forceful collection of Hollywood craftsmanship, action ingenuity, and elaborate stunts. People shoot at each other, punch each other, crash into each other, and torture each other. People don’t like each other in this movie.

As with each movie in the series, Ghost Protocol concerns a hunt for an object. In this case, a briefcase. There’s better scripting here though. That briefcase emboldens the plot rather than circle around outside of it.

It’s all impressive and staging is no less so

Less of a carry-on, that briefcase contains nuclear launch codes, playing in an American cinematic casualness toward nuclear extinction. Ghost Protocol’s villain talks up radioactive annihilation as a solution to Earth’s problems, a direct baddie with little moral ambulation. Such a man cannot exist for long in reality though, at least according to Ghost Protocol’s laissez-faire approach. There’s always an Ethan Hunt (Tom Cruise) to save the country – and the world.

To save Earth, Hunt clings to the Burj in Saudia Arabia, fights through a sandstorm, infiltrates lavish parties, and brawls with someone on the active elevators of a high-class car port. It’s all impressive and staging is no less so. Director Brad Bird proves as capable in live action as he was in animation with The Iron Giant.

Bonus points, too, for this fourth entry. Ghost Protocol finally gives a woman something to do in a Mission: Impossible. After spending three movies treating women as meager goals for men to save, Paula Patton engages in a fun hotel room brawl and plays a key role in a climactic shoot-out.

Unavoidably, there’s a sameness at the heart of Mission: Impossible. It’s a series now built less on the bulk of spy theatrics than it is suicidal stuntwork. Ghost Protocol has a lot of that. That’s the sum of its success. 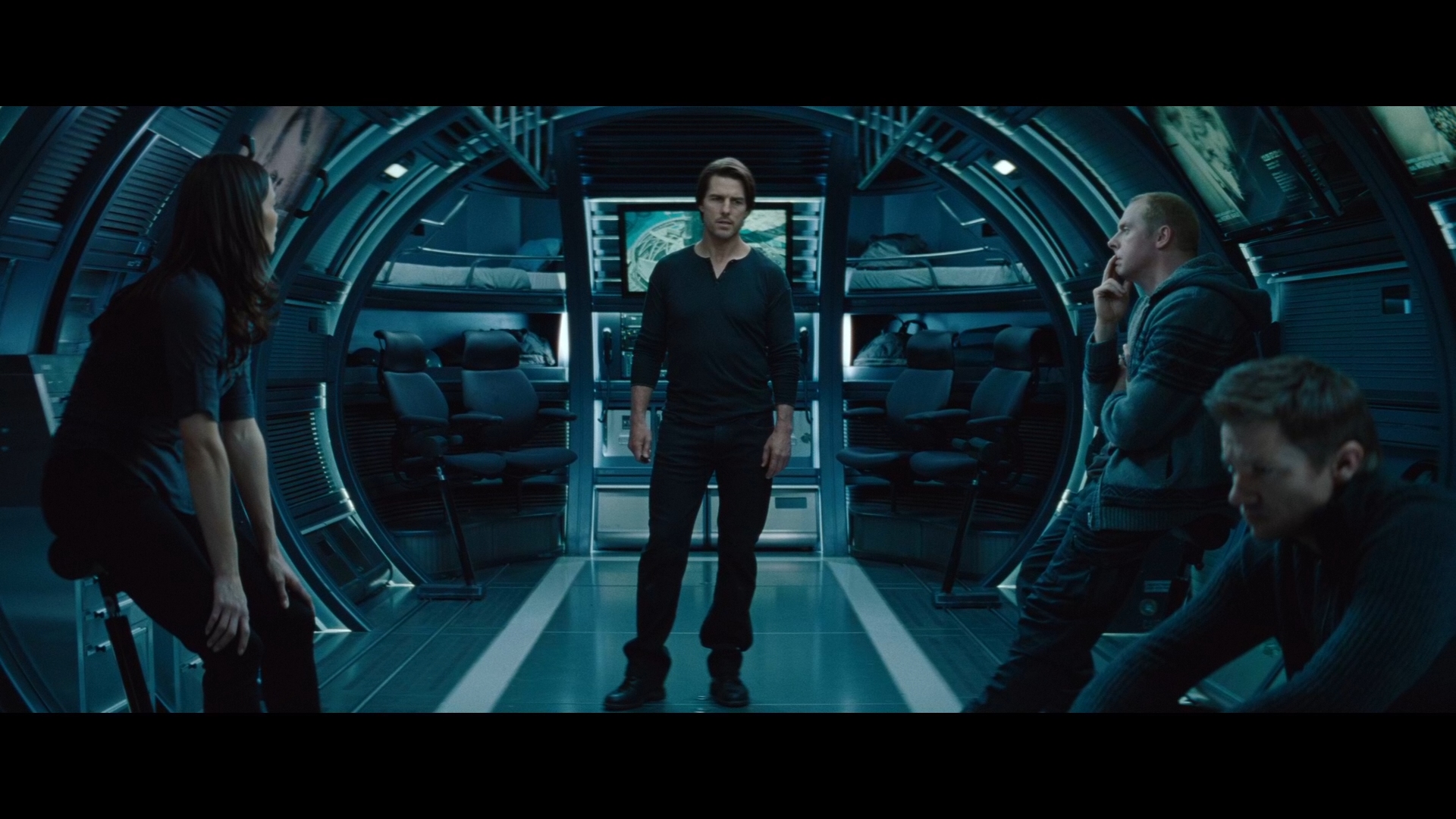 Paramount pushes Ghost Protocol to UHD in a static presentation. Brad Bird filmed a number of scenes for IMAX displays, but the ratio here is locked to 2.35:1. That’s a bit of a downer.

More of a downer is the destructive contrast. Frequently clipping, it robs Ghost Protocol of fidelity. Highlights don’t glisten with the help of Dolby Vision so much as they eradicate texture. At times, it’s ghastly, giving the “Ghost” of the title new meaning.

That’s all true of black levels too, a problem for Mission: Impossible in 4K as whole. Crush is dominant. Look at Jeremy Renner’s first appearance, where his suit blends into the seat behind him. That’s common.

Filmed with both 35 and 65mm stocks, there’s slight difference between the two. Notable is, of course, the grain structure. It’s near non-existent with the 65mm IMAX material. However, that does come with a small cost: a mild edginess that indicates a touch of digital sharpening. A few anomalies aside, 35mm stays consistently precise with excellent reproduction. That Paramount’s encode holds even under the weight of a sandstorm says a lot.

Until the third act, Ghost Protocol utilizes two basic palettes, the traditional orange and blues. Flesh tones steer a bit wonky (another consistency of these 4K Mission: Impossibles). Otherwise, deep color provides light density. Once into India, reds and turquoises begin to sprout. It’s gorgeous. Seeing the city at night rivals the Shanghai scenery of Mission: Impossible III; that goes for both color and HDR intensity.

Vivid use of a TrueHD 7.1 soundstage keeps Ghost Protocol consistently active. Immediate gunfire begins popping from the center rears, while the Kremlin’s near destruction shreds the LFE and layers a great debris field. Superlative range produces thick low-end and punchy highs, all with the expected clarity and heavy dynamics.

As with the previous Blu-ray, the Dubai sandstorm is a delight. Wind spreads throughout the soundstage as various debris pans about. Appreciating downtime, ambiance plays a role too, keeping the rears active as the IMF team plans a move from inside a train car safe house. And again, the Dubai sequence gains tension from the wind as Cruise hangs from the Burj.

Paramount leaves the film to its own devices on the UHD and Blu-ray. That leaves a third disc to push bonus features, split into two sections for roughly two hours of content. Mission Accepted contains three behind-the-scenes featurettes focused on specific locations and stunts, including that perilous Burj stunt. Footage of Cruise being playful while suspended by two wires is awesome.

Impossible Missions are 11 pieces with less specific purposes. Shooting on IMAX, choosing a composer, effects in the sandstorm, props, and the prison shoot are included, among others. For these and the Accepted clips, the same holds true: they’re wonderfully produced. Although quite high on the praise for Cruise (some might say ego-stroking), they feel natural, honest, and open to the audience. It’s more than face time interviews.

Director Brad Bird details the eight deleted scenes via an optional commentary, the last bonus section aside from trailers. It’s a shame that Bird doesn’t get to chat over the main feature though.

Mission: Impossible Ghost Protocol finally has fun with this series, alleviating some unavoidable sameness while coordinating with future fears.

The 15 unaltered images below represent the Blu-ray. For an additional 20 Ghost Protocol screenshots, early access to all screens (plus the 13,000+ already in our library), 50+ exclusive 4K UHD reviews, and more, support us on Patreon.