Nestled comfortably in place during Hollywood’s ‘60s TV reboot cycle (dropping Addams Family, Flintstones, and others onto screens), Mission: Impossible plots out a course of anti-government paranoia and muddy, even convoluted story beats. It’s a movie about a computer disk, nothing more, trapped in a twisty/turny spy thriller that’s bulkier than needed.

Luckily then, there’s Tom Cruise. He’s cocky and arrogant as Ethan Hunt, not much of a stretch for the lead of Top Gun. Cruise’s Hunt offers a brainer character, enough to unravel internal corruption in the spy organization IMF. Still, he’s slick, a true Hollywood man of action, slipping away from capture through absurd schemes and close calls. It’s fun.

Cruise hoists Mission: Impossible onto his shoulders, provided with a script better for TV than feature length

The memory of Mission: Impossible isn’t the action however. Rather, it’s a tense stand-off as Cruise dangles from a rope, intercepting data from a secure government computer. If not for The Matrix and bullet time, Mission: Impossible’s tense, sweaty rope stunt would stand as the ‘90s most obnoxiously emulated and parodied scene. Despite heavy foreshadowing and exposition leading toward that cleverly designed scene, it was all parody out of love.

In terms of dramatic tension and the potential loss, Mission: Impossible’s standout sequence is popcorn drama at a fine peak. Intercut with comedy – a bumbling government employee frantically cutting through the halls seeking a bathroom – the formula is used to perfection. Cruise dangles, employee vomits. Cruise falls, employees nears the door. The back-and-forth is classic.

Mission: Impossible needs material like that. Otherwise, it’s a rather empty, hollow blockbuster. It even wastes Jean Reno in a bit part. That’s inexcusable. Merit lies entirely in the set-up and execution rather than story engagement. Hunt’s an aggressive screen hero, battling foes who lack clarity for the sake of audience misdirection. Intrigue concerns a disk loaded with IMF agent names, ultimately an indifferent item, a MacGuffin to its fullest. Cruise hoists Mission: Impossible onto his shoulders, provided with a script better for TV than feature length. Oddly, that’s part of the charm. 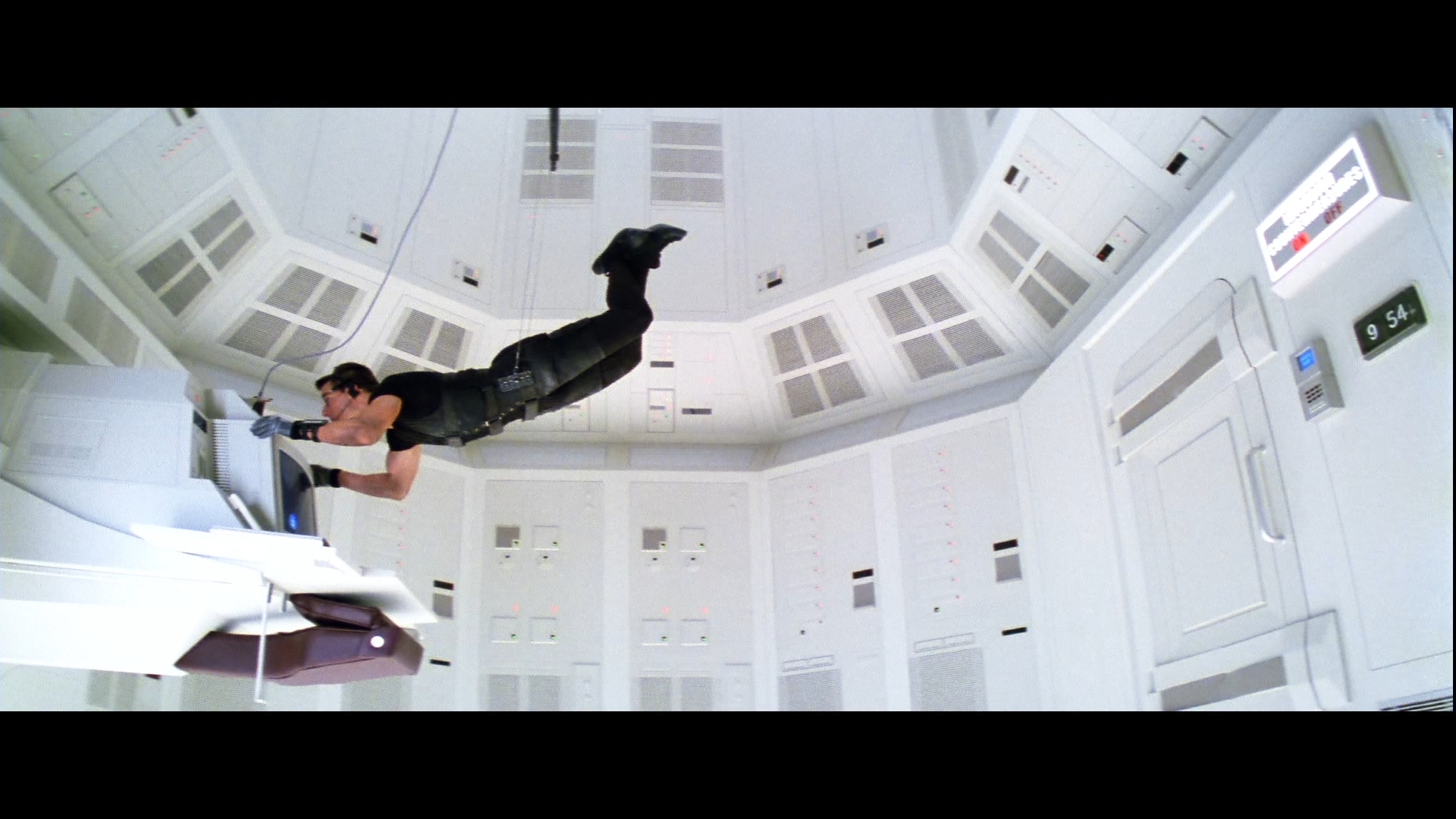 While Mission: Impossible is not a perfect transfer, it does avoid the botch jobs of recent Paramount releases like Forrest Gump. Here sits an obvious 4K scan. Tremendous detail is preserved behind a heavy but natural grain structure. No visible attempt is made to dilute the film stock with digital tampering.

The evidence of age (Mission: Impossible is above drinking age now) comes in transitions. Fidelity drops and softness sets in. Each edit is obviously placed, no fault of this transfer or encode, rather the source. Paramount’s compression excels. Grain looks like grain, clean and resolved without dissolving into noise.

Color is where most of the concern lies. Flesh tones take on a wide array of hues. The vary from gorgeously natural to wonky Crayola peach. While the rest of Mission Impossible appears with a slight saturation (the aquarium’s blue is dazzling), those flesh tones give pause. As whole, grading is entirely different than prior. The heavy oranges of the opening opera hall noted on Blu-ray disappear for a more organic touch. Inside the secure room as Hunt dangles, whites reach pure white rather than a warmer slant.

In terms of Dolby Vision, the pass is mild with only slight pop. Some black crush remains, particularly in the opening act. Contrast brightens over the Blu-ray, if lacking in density. Mission: Impossible gains depth, if not to any tremendous level.

On UHD, the disc pairs with a TrueHD 5.1 mix. It’s dated. Surrounds accentuate a handful of scenes, restricted and held back. Early scenes in the elevator shaft spread ambiance. Exterior rains rush the soundstage. The finale brings it all together, with a helicopter occupying the rears and heavy winds rushing around.

Fair dynamics give life to a handful of explosions, but bass lacks tightness. LFE support is mild at its peak. Luckily, the score adds weight, tremendous and clear. If range seems sedate, don’t worry. Soon the score ramps up and fills in that hole.

Paramount includes the original Blu-ray release, loaded with bonus features meant for the DVD. They haven’t even fixed the horizontal stretching as these features were originally window boxed. Outside of the now dated series retrospective, there’s nothing worth watching in the batch of five featurettes. Two award videos for Tom Cruise seem like a contractual obligation to please the star, while text dossiers, a photo gallery, and trailers bring this one to an end.

Tom Cruise elevates an overly routine spy thriller in Mission: Impossible, aiming to be smarter than it really is.

The 15 unaltered images below represent the Blu-ray. For an additional 19 Mission Impossible screenshots, early access to all screens (plus the 13,000+ already in our library), 50+ exclusive 4K UHD reviews, and more, support us on Patreon.