Much of The Maze builds on the legacy of Universal’s classic horror. The eerie, fog-drenched castle, the empty interiors, deepened shadows, frozen bats on strings, and pervasive sense of horror mystery – all of that stems from the iconic ‘30s and ‘40s output. By 1953, The Maze’s castle creeper aesthetic long since ran its course.

In 2018, The Maze lurches forward. The talk-heavy plot is solvable if only one line were spoken. An ambient mystery inside this Scottish abode barely has bite. Kudos to star Richard Carlson for trying to carry this listless offering through to its conclusion. He has little to work with.

Give some credit to Veronica Hurst too, playing Carlson’s fiancee, locked in the castle walls when Carlson inherits the place. She does well in the stock part, that of a quizzical women in a place full of weird butlers and kooky noises at night.

Whether due to budget or time, The Maze chokes itself out with clunky pacing

Everything hinges on the mystery, as to what exists in a hedge maze in the castle’s backyard. It takes 72-minutes to find out and only a two minutes to explain it, a summary of how not at all complex this is. While The Maze almost – and this is stretching things – finds a hammy way to inject sexuality and gender acceptance into the mix, this is not that clever of a script. Bride of Frankenstein’s rich, mature effort; that speaks for the director. The Maze’s clumsy routine exists for exploitative value.

Waiting for the inevitable reveal only makes The Maze’s secret sting further, a floppy man-in-suit without a care, hopping uncomfortably up steps and becoming stuck in the railing. It’s almost inhumane for the poor actor inside. Come the science lesson to explain how this came to be, it’s a stretch even for an era when men turned themselves into flies and space blobs landed on Earth.

The Maze is a nearly successful production. Whether due to budget or time, The Maze chokes itself out with clunky pacing. Despite 20+ years of horror progress by the time of its release, The Maze learned little about mood from the predecessors it’s patterned after. 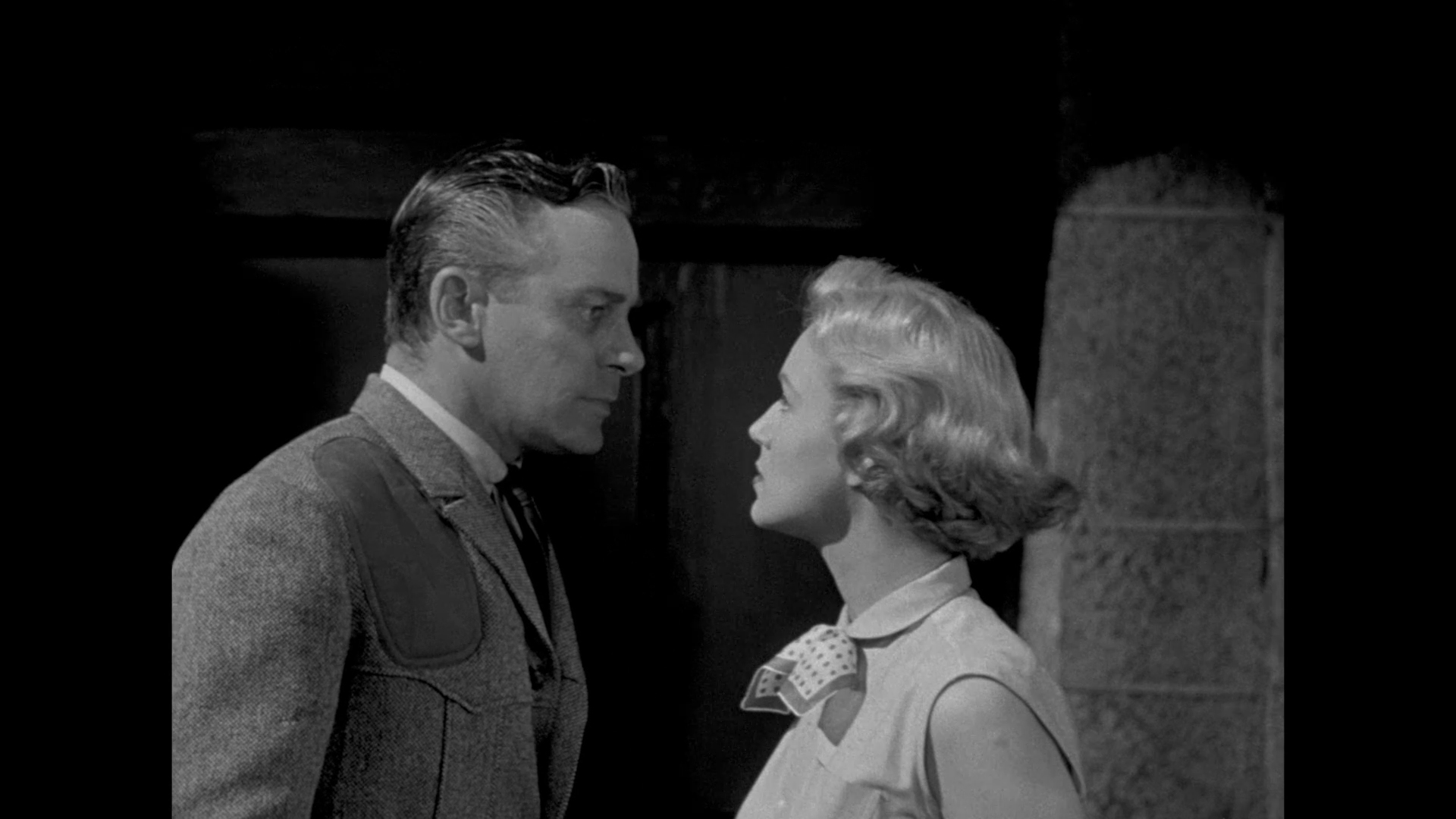 Kino brings this cheapie to Blu-ray with admirable results. The print used displays limited wear, hindered only by a consistent, thin scratch down the center of the screen. It comes and goes. A few spots of dust impede nothing.

The Maze isn’t given the highest resolution scan. Detail falls when paired with a soft image, with a light grain reduction pass. The only sign of tampering (outside of the sharpness loss) is jumpy grain, often raising in thickness a few frames prior to dissolves. That gives away the trick.

The real treat is this 3D presentation, an absolute delight. While The Maze isn’t shot for much visual gusto in 2D, it’s clear why. Images breathe when under the stereoscopic lens. Composition favors shots with extreme depth and outstanding foreground use. There’s always a candle, chair, or other object near the lens.

Of course, The Maze plays tricks. In an early dance scene, two men toss a woman toward the camera. Later, there’s a letter thrust toward the screen. Hokey, but effective. Overall, the 3D generally breathes naturally without attention being brought to the format. It’s there for effect, like peering down rows of the hedge maze. 3D makes the environment look twice as large than in 2D, a smart use of the medium.

A pleasant DTS-HD 3.0 mix uses the available soundstage width to add some creepy vibes. Monster sounds crawl through the front soundstage at night, passing a sleeping woman. Some startling dialog will sprout in the stereos for effect too.

More surprising though is clarity. Opening score cues exhibit fantastic range. All spoken lines survive the barren castle interior without exaggerated echoes. Without a spot of damage to note, condition surprises given the age.

Film historians join for a commentary track, the roster being Tom Weaver, Bob Furmanek, Robert J. Kiss, and David Schecter. That’s paired with a short six-minute interview with Veronica Hurst who does some reflecting on the film.

While The Maze tries to recall the glory days of Universal horror, clumsy pacing and an eye-rolling twist ending can’t be saved by spectacular 3D.

The 15 unaltered images below represent the Blu-ray. For an additional 12 The Maze screenshots, early access to all screens (plus the 12,000+ already in our library), exclusive 4K UHD reviews, and more, support us on Patreon.