A key action scene in Tomb Raider involves Lara Croft leaping from a ridge and into rapids. There is, of course, a waterfall awaiting her at the end.

The perilous waterfall cliché died after Disney’s Emperor’s New Groove expertly used the predictability for a satirical gag. That was in 2000. In 2018, it’s the reanimated corpse of a cliché.

To be fair, Tomb Raider’s use isn’t completely the same. Croft, played capably by Swedish Oscar winner Alicia Vikander, is lucky enough to grab onto a crashed, rusting jet before the fall. Then she does fall, so this isn’t safe from criticism.

Tomb Raider isn’t what it once was. Gone is the starlet style and grossly exaggerated figure of classic Croft. As with the contemporary interactive Croft, Vikander lacks the confidence of her classic counterpart. She’s not living in a mansion. She’s delivering pizza. It’s a less artificial character than Croft once was.

The origin story of Croft sets her on a path to find her missing (or possibly dead) father. While desperate for action in the first act – leading to a painfully corny chase on London’s streets – soon Tomb Raider arrives on a fantastical, previously undiscovered island. There, the jungles, the rocks, the caves, and yes, the rapids build the peril for a more fragile Croft. She’s not yet toughened; that will come in any possible sequels, surely.

Tomb Raider plays with an unusual directness for a blockbuster, with feeble amounts of humor and no self-awareness

Croft endures though, and Vikander is a capable saleswoman of the role. She plausibly takes a beating from the location and from stock villain Vogel (Walton Goggins), able to keep going because of sheer will.

Audiences though need to endure too, Tomb Raider little more than a B-grade adventure with an IV line of cliches fed into its script. Intensity is a feint, situating Croft where cinema’s typical solutions sit nearby. Literally, too. While being choked on the ground, Croft looks to her side to find a carefully placed rock waiting, slamming her assailant in the head. To think how many times that rock saved an action star. It’s a hero, that stone.

The genuine loss here is in entertainment value, a tiresome reboot without the spark of the videogame character. Or, the camp of the Angelina Jolie series. Tomb Raider plays with an unusual directness for a blockbuster, with feeble amounts of humor and no self-awareness toward the general absurdity of it all. Vikander is tough but struggles in delivering drama when surrounded by Tomb Raider’s hokier adventure aspects. Maybe it’s not Vikander so much as asking her to do the impossible in these circumstances: carry a film without the same determination she has.

If there’s a loss in a throwaway adventure story, it’s Croft herself. This videogame rebirth established her as less a Barbie doll that fights robots and dinosaurs than a real world, capable action star. There’s an equality evident in digital Croft, capable of withstanding anything her male counterparts could. On film, she’s only given a basic form factor to sustain herself against Hunts and Bournes of the world. That’s a shame. 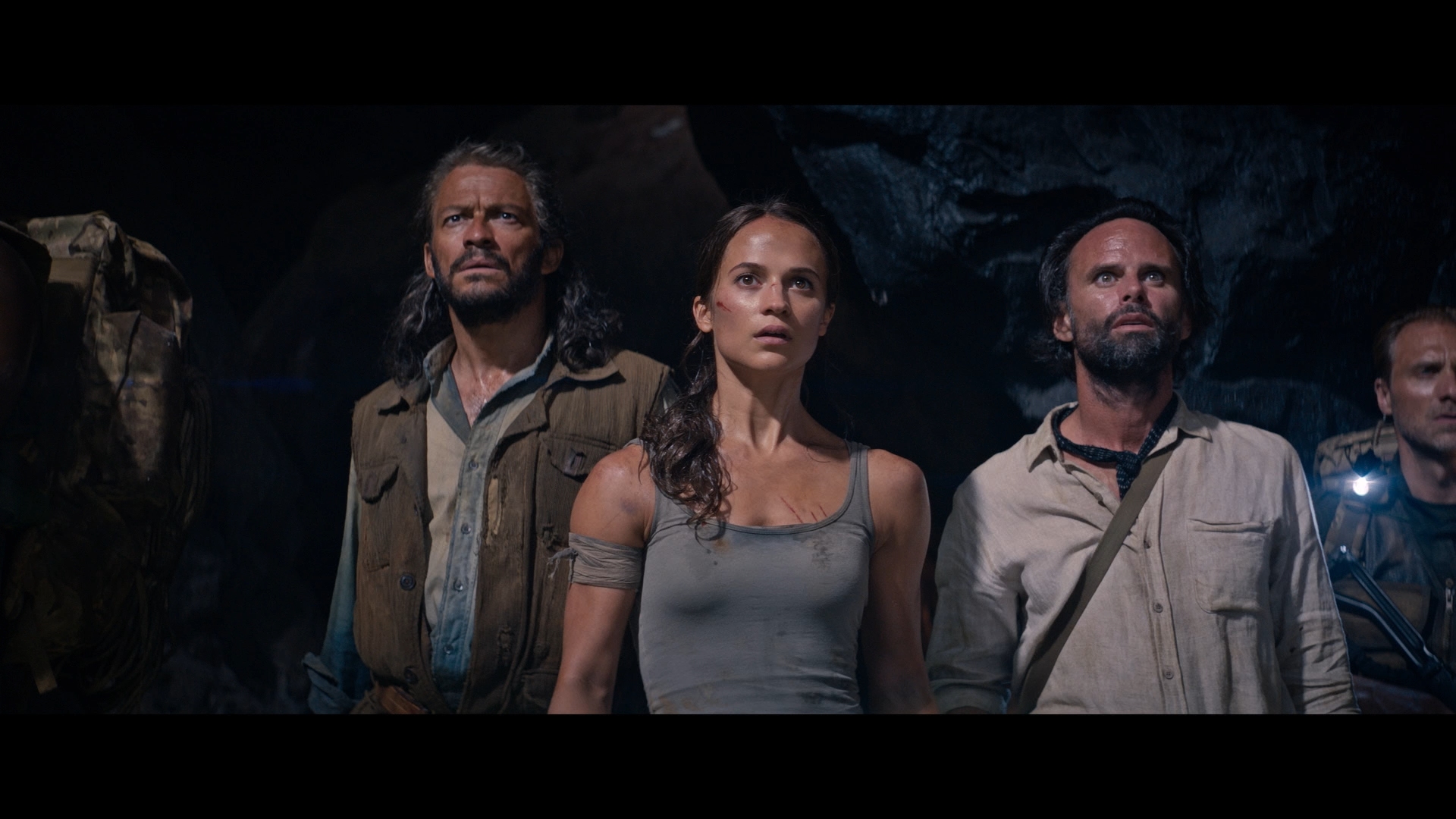 Most environments appear to excel in the same way. Some stock aerial views lack the same definition, standing out for a few seconds. Once into Tomb Raider’s own footage, street views show off. As Croft rides her bike down London streets, every brick on the buildings and crack in the street show up.

Oddly, the disc chokes under some tougher condition. The encode muddies as it tries to resolve the minutiae in a Chinese harbor during a chase scene. Similarly, jungles offer the same challenge, nice, if lacking pure fidelity because of strained compression. It’s a small flub, but worth noting.

Luckily, the rest takes advantage of the format. A grand Dolby Vision outing lays on dimension and depth. Black levels tackle a number of challenges, including cave scenes with little light. A soldiers sweep the darkened scenery with their various lamps, the other end of the HDR spectrum breaks out. Intensity isn’t held back. The same goes for exteriors and fantastic, sun-drenched contrast.

The demo sequence for Tomb Raider 3D comes during the rapids/airplane sequence. There, the number of hanging shots, shooting Lara from above and below excel at pushing depth. Inside the plane, separation between background and foreground is hefty. If not the greatest, than not far from.

All of the jungle scenery is made for this format too. Fall-in effects push deep, better than other non-jungle dialog scenes which tend to weaken a bit. In totality, Tomb Raider follows the modern pattern of cautiously pushing the background into the frame as to not discomfort sensitive viewers. Pop-out effects stay reserved too, with limited use. General dimension is pleasing, but this conversion lacks the full weight of the potential.

Tomb Raider defaults to DTS-HD, so do take note. Head for the Atmos mix if you have the equipment to find a pleasing if slightly lacking audio outing. Tomb Raider misses some of the low-end force of format titans, leaving the track lacking in range. As earthquakes take hold of the island, the lack of oomph becomes a prominent hole in an otherwise capable track.

The rest does well. A grand boat crash amid a storm feels greater than the visual scale allows. Waves whip around and water splashes overhead. Thunder claps roar too. That’s a lot from to ask from this track while still maintaining dialog clarity, and it succeeds.

For positional use, the plane falling from the waterfall offers the strongest example. Debris clatters around as it falls, all while rusted metal groans from the shifting plane’s position. Shoot-outs whip bullets through the soundfield while Croft’s bow & arrow sends shots out with flawless direction.

This is a dud. Skip Tomb Raider: Uncovered, a dull EPK making of with only seven minutes to play with. Croft Training delves into Vikander’s grueling prep for the role, interesting at six minutes. The first (and only) look at the technical process comes in a five minute breakdown of the rapids sequence. For the best, view the fine if truncated look at Lara Croft’s history in Evolution of an Icon, which even for its promotion-first attitude, still provides a bit of history.

Alicia Vikander is a great casting choice for Lara Croft, but the Tomb Raider movie surround her is a derivative, sluggish tale.

The 15 unaltered images below represent the Blu-ray. For an additional 27 Tomb Raider screenshots, early access to all screens (plus the 12,000+ already in our library), exclusive 4K UHD reviews, and more, support us on Patreon.