There’s legitimacy in Trading Places’ bet. Two rich gamblers argue whether social conditions determine a person’s wealth and social stature, betting for and against that theory. They pick an affluent snob, Dan Aykroyd, and a homeless beggar, Eddie Murphy, swapping their circumstances through a cruel sport (of sorts) that benefits neither.

Murphy succeeds, given a mansion, training, and high salary. Aykroyd falls – hard. By the end, he’s a drunken, stumbling Santa Claus, stealing fish, and on the verge of suicide. Murphy can’t fail. Aykroyd can only fail.

Trading Places is effective because of how compelling the “experiment” becomes. It’s certainly a stab at greed and uncontrolled wealth. It’s also sharp in delivering racial parallels, Murphy a stellar choice, both for entertainment value and softening the crueler aspects of the script.

Trading Places deals in dollars, but it’s a story of wit and misdirection to abolish greed

Thankfully, Trading Places holds remarkable relevance. The swinging stock market and beguiling money making schemes – trades happening with framed pictures of Ronald Reagan nearby – speak loudly in a post-recession era. Wall Street elites getting their comeuppance through their own greed? Nothing in that part of the story will age.

In the midst of the class satire and sharply written (if slow coming) gags, Trading Places tells a story of privilege while deriding the ups and downs of shrewd capitalist behavior. It’s commentating directly on the wider impact of financial and racial inequality in an unusually observant way, honestly and truthfully. Murphy’s past is only glanced because of the cliché of a broken, fatherless home. That’s all Trading Places needs; a complex social situation is reduced to stereotype for the sake of moving forward. Aykroyd’s upturned nose and impossible obliviousness is done in the same way. 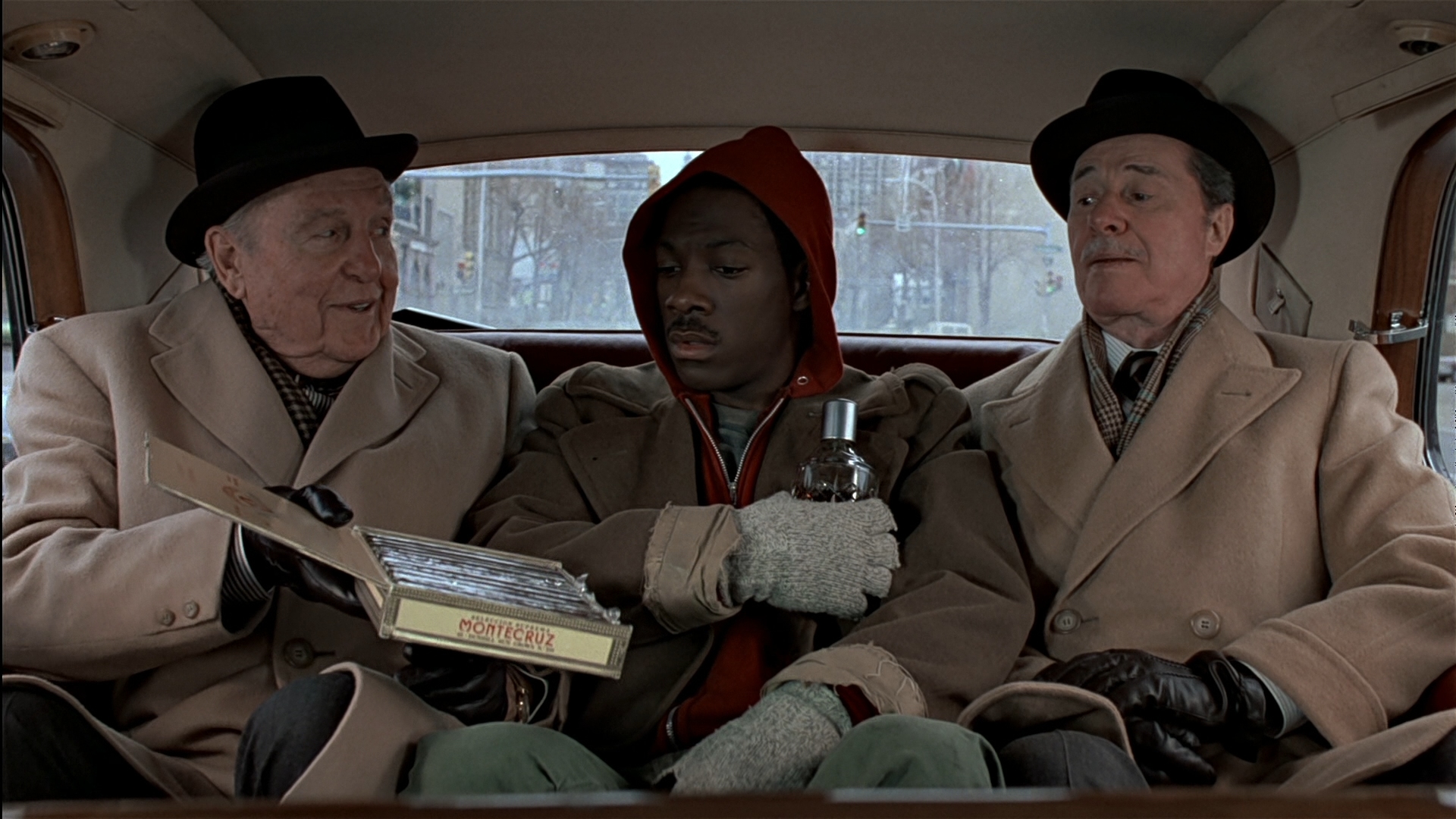 Thirty five years on, Paramount does nothing to honor Trading Places’ theatrical anniversary. This transfer is pitiful. Awful even. Laced with DNR, everyone looks waxy and plastic, devoid of any fine detail. Mushy textures smear with movement, leaving behind traces of noise. Moments still containing grain stand out unnecessarily, and usually at odd moments. Say, a passer-by in the foreground seems to “carry” grain with them, as if the DNR routine missed part of the frame.

Even the encode is a murky mess. Watch as Aykroyd first enters his office; mosquito noise swarms over his head as he walks. Compression butts in on establishing shots, giving city views a digital buzz rather than clean definition. A wealth of black crush further limits the quality.

The print, too. That’s overdue for a cleaning. Various marks, dirt, and scratches dot the print. Trading Places looks its age, a disappointing statement in an era where catalog titles often look superlative. Bland color likewise adds to the clumsiness.

A dud Dolby Digital offering is, at the least, clean. Dialog in the center channel betrays any aging with clarity. That’s a positive.

Stereo work spreads ambient touches into the stereos. Philadelphia streets swell into the surrounds, with passing cars and general street noise. The floor of the stock exchange performs in the same way. It’s fine.

Bonuses follow the same path as the previous Blu-ray release. Nothing is new. Insider Trading is an excellent making of piece with numerous interviews. It’s a shame it only runs 18 minutes. Trading Stories collects interviews produced for promotional purposes that last eight minutes.

One deleted scene comes with a commentary. The scene is shown on TV to make up for the time lost due to content editing. Dressing the Part is a look at the costumes for six minutes.

The Trade in Trading Places interviews various traders about what they do. Industry Promo Piece starts with an introduction from Landis, and is a last minute ad done for Show West when the film was only half done. Plenty of improv in included here during its four minute run. Finally, a trivia track can be run alongside the film.

The 15 unaltered images below represent the Blu-ray. For an additional 24 Trading Places screenshots, early access to all screens (plus the 12,000+ already in our library), exclusive 4K UHD reviews, and more, support us on Patreon.