The Great Silence from Italian director Sergio Corbucci is one of the pivotal classics in the spaghetti western genre. First making his mark with Django, a more commercially successful spaghetti western still popular today, he set out to make a more jaded masterpiece. A bleak, heartless tale of bounty hunters and corruption, the 1968 film paints a far less romantic and less idealized version of the Old West than its competitors.

This is one of the best and most influential spaghetti westerns ever made, with an unforgettable ending that subverts all expectations. Accompanied by an incredible score from composer Ennio Morricone and haunting, snow-swept cinematography, The Great Silence is classic western filmmaking at its finest.

Beautifully set in Snow Hill, Utah near the end of the Nineteenth Century, only one man stands between an evil banker’s nefarious control of the isolated town and a group of persecuted citizens who have taken to the hills. The plot concerns a group of bloodthirsty bounty hunters, led by the vicious Loco (Klaus Kinski, Nosferatu). Under the manipulative direction of Pollicut, a cruel banker with his eyes on a local beauty, the bounty hunters prey on a band of persecuted outlaws who have taken to the hills.

Only a mute gunslinger named Silence (Jean-Louis Trintignant, The Conformist) stands between the innocent people forced to live outside the town’s boundaries and the ruthless greed driven by the bounty hunters. In this harsh world, the lines between right and wrong aren’t always clear and good doesn’t always triumph. Only a new sheriff, played by actor Frank Wolff, offers any semblance of justice in this crooked town.

Much like Eastwood’s iconic Man With No Name character in Sergio Leone’s hallowed Dollars Trilogy, Silence is a winning protagonist with real presence. Known as the fastest gun in town, he’s the only man feared by the merciless bounty hunters. Though out-numbered, you feel comfortable that Silence will somehow prevail against these men. That is what makes the final act so gripping when everything doesn’t turn out as you expect. Kinski is oddly perfect as Loco, a bounty hunter prone to wearing strange fashions but utterly ruthless when it comes to murdering his bounties. Their clash is inevitable, the Yin and Yang of The Great Silence.

The Great Silence doesn’t shy from graphic violence and it doesn’t flinch from pushing boundaries. A rare interracial romance for its time is depicted between Silence and a local woman, widowed after a false bounty was placed on her husband. Corbucci subverts the normal conventions of spaghetti westerns while telling a taut, convincing tale of small-town corruption with one man looking to make a difference. Vengeance and retribution are the dominant themes, but they are placed under an intense focus that breaks down their actual ramifications for each character.

This is an easy recommendation for true film lovers as The Great Silence is cinema gold. Years ahead of its time, its willingness to break from the genre’s limitations when necessary make it as entertaining today as it was in 1968. 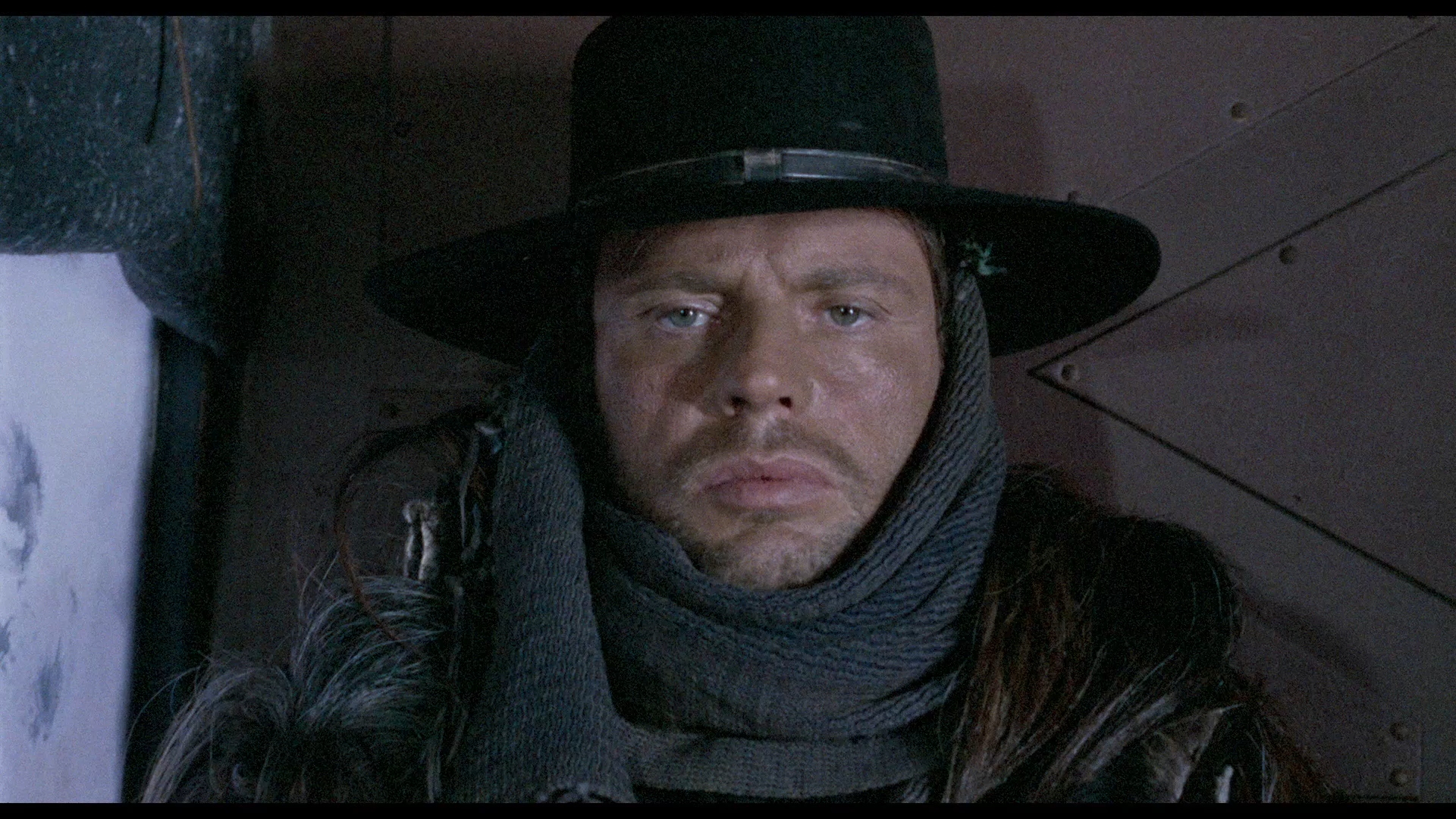 The Great Silence receives a crisp, new film transfer from Film Movement for this 50th Anniversary Restoration edition. It is a filmic, stable presentation that takes off in quality past the opening act, bogged down by the heavy grain and optical cinematography of the first reel.

The provided booklet lists the transfer as a new 2K film scan and restoration from the original camera negative, courtesy of Compass Film SRL, an Italian firm. It is presented in a 1.85:1 aspect ratio, slightly differing from the previously-issued German Blu-ray at 1.66:1 that earned decent reviews. The Japanese also took a crack at The Great Silence on Blu-ray, though by all reports that is an inferior transfer taken from a Euro-sourced HDTV master.

If you are being a stickler for the original theatrical aspect ratio, the 1.66:1 aspect ratio may well be more correct. Supposedly the older 1.66:1 transfer was struck from an Italian interpositive off the negative. The Great Silence was banned in England and basically shut out of American theaters by its own studio, so its biggest theatrical markets were France, Germany, and Italy. That usually means a movie would have played at 1.66:1 in most European theaters of its day. Nevertheless, this 1.85:1 transfer has its own benefits and doesn’t affect the composition in any meaningful way. It opens up more information on the bottom and far left, without losing anything.

The 1968 Italian production looks pretty good in this 1080P presentation with crisp texture and film-like grain structure. Running 106 minutes, this completely uncut Italian version is encoded in stout AVC on a BD-50 at high video bitrates. The new color grading bestows an even, faithful palette on the movie’s stunning mountain scenery. Flesh-tones look superb and the contrast hasn’t been jacked up. Its gamma level may be slightly elevated in the opening act. Corbucci had always wanted to film a Western in the snow and got his wish on The Great Silence.

The video doesn’t have overwhelming definition and detail, though it retains a transparent rendering of the film elements. It demonstrates plenty of fine detail without overwhelming resolution. The excellent clarity shows off the benefits of the new restoration. The film elements are in sound shape with only minor evidence of fading and debris. Hints of sharpening produce negligible halos. Significant dustbusting performed on the digital film scan has cleaned up any leftover marks. This is a meaningful upgrade in picture quality and fans should strongly consider getting this Film Movement edition.

The Italian audio has its moments but this is a limited, serviceable aural experience. The cast came from all over Europe, it’s unlikely they dubbed their own voices for this soundtrack. The audio quality has adequate dynamics. It’s certainly cleaner and higher fidelity than the lossy English dub.

It’s not a terrible English dub by any means but The Great Silence never even hit American theaters, and was banned in England by censors for many years. The source material for the English dub has rougher fidelity and far more surface noise. It’s really an afterthought for the film and the Italian soundtrack is the preferred choice.

Film Movement delivers a round of new extras for this 50th Anniversary edition of The Great Silence. Included inside the Blu-ray package is a leaflet promoting Film Movement Classics’ catalog of releases. The only prior edition of this film with substantial bonus material not included here is the French Studio Canal DVD, albeit it’s not English-friendly at all.

The Blu-ray competitors to this Film Movement edition is a Japanese release and an all-region German release. Interestingly enough, all three differ in their aspect ratios, all using different transfers. The German edition does have the German and French dubs, if that is a necessity for you. Having not seen the other transfers, I can’t comment on which transfer is the best and most faithful. The Film Movement edition is listed as all regions.

A 12-page booklet with new “Ending the Silence” essay on the film by critic Simon Abrams is included. It’s a good look at the film and places the movie in the right context.

Cox On Corbucci (14:46 in HD) – Filmmaker and author Alex Cox discusses his interest in Corbucci’s films and reveals some of the movie’s more pertinent details behind the scenes. Apparently Clint Eastwood was interested in remaking The Great Silence for American audiences.

Western, Italian Style (38:01 in SD) – An archival 1968 documentary narrated by actor Frank Wolff with neat footage behind the scenes about making spaghetti westerns, from Leone’s trilogy to a dubbed interview with Corbucci himself. This isn’t a hard-hitting documentary and was likely made to sell more Italian-made westerns to Hollywood, but it’s a fascinating snapshot of how the films were viewed at the time. Some behind-the-scenes footage from The Great Silence is shown.

Alternate Ending 1 (02:01 in HD) – This “happy” ending to the movie includes optional commentary by Alex Cox. The Great Silence would have been a drastically different experience with this more Hollywood-style capper.

Alternate Ending 2 (04:31 in HD) – A re-cut finale to the bloody shootout that is more ambiguous.

Film Movement Trailers (All in HD) – Time To Die, Hana-Bi, Kamikaze 89, The Dark Valley, Once Were Warriors, Ugly, Dirty and Bad

One of the genre’s classics, Corbucci’s bleak tale of Silence remains a wildly entertaining western.

The unaltered images below are taken from the Blu-ray. For an additional 15 The Great Silence screenshots, early access to all screens (plus the 12,000+ already in our library), exclusive 4K UHD reviews, and more, support us on Patreon.