Providng a nostalgia stew of the Terminator series, Genisys plunges through franchise lore with wanton recklessness. How cool it should be to watch old Arnold Schwarzenegger fight young Arnold Schwarzenegger, but to do so requires a deletion of what came before, mostly to tell it all over again.

This is a new timeline then. It’s resetting. A fifth film is clearly too much time travel baggage, leading to the retcon here. Despite the creative freedom, it’s cycling back into 1984, name dropping Miles Dyson (through his son, of course), using a liquid T-1000, and re-injecting star appeal for box office draw. It’s a movie trapped in itself, drawing on past and future without settling on either. The studio wants old and new fans joined in hands, celebrating this series, and in that effort, appeals wholly to neither.

Genisys is the worst Terminator

This isn’t the same Sarah Connor of old. That’s a misfire. Genisys places this new Connor (Emilia Clarke) in regular peril from which only men can save her and bases a flurry of dialog around her sex appeal. Her puppy love stares make it worse. As noted by Arnie, she will need to “mate” with Kyle Reese (Jai Courtney), adding to sexual tension rendered unnecessary in Linda Hamilton’s machine gun-toting, inclusive Connor.

The reset allows screenwriters to update technology. SkyNet now births itself from humanity’s addiction to tech, Genisys a fierce proponent for setting down a phone. That’s fine for five minutes, until Genisys uses that technology to unload computer generated action that bumps into more action. It speaks against advancement, yet is edited to appease an audience obsessed with peeking at their phones. Or, making sure the volume output is ear bleeding enough to distract from the chirping pocket device also fighting for attention.

Genisys tries. A school bus chase delivers car smashing and shotgun-blasting. It’s disrupted by grating humor (and finished with an embarrassing nod to TV’s Cops). There’s a nifty idea for a new Terminator model. That crushes a critical character in the process however. Schwarzenegger versus Schwarzenegger plays well in trailers. Any greater consequence to that appearance is brushed aside after the first act.

Hard point: Genisys is the worst Terminator. Jeer at almost-clunkers like Terminator 3 or Salvation if you must. At least Terminator 3 smashed Schwarzenegger through a building as he dangled from a crane. Salvation’s hackneyed logic didn’t do a quarter of the damage Genisys does to the greater story arc. 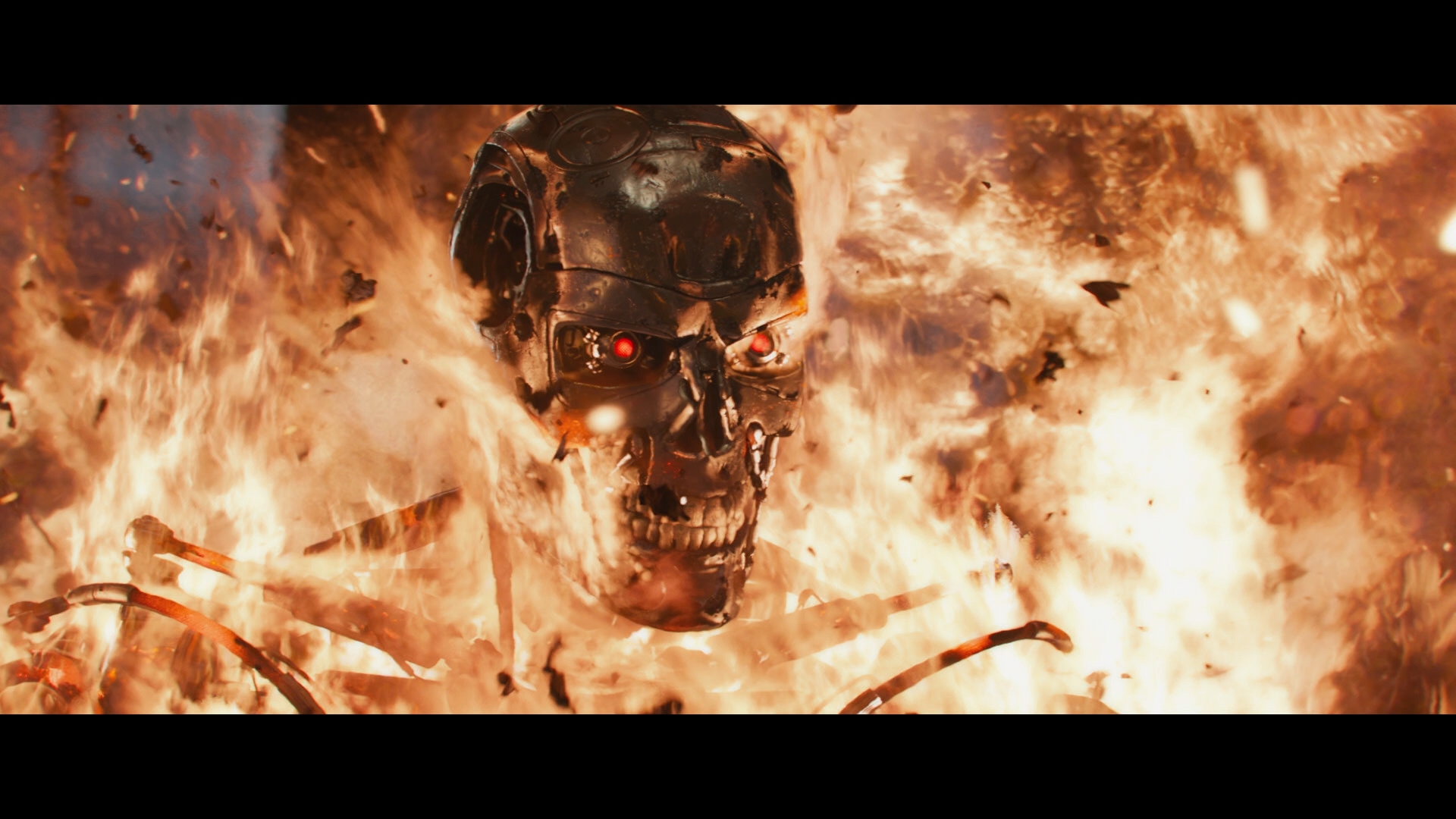 Released solo without Paramount’s other Terminator production (Salvation) in tow, Genisys produces a decent UHD image. A 2K source adds visibly pointed resolution. Facial detail pops and aerial views of San Francisco display superb sharpness. The nano bots of the new Terminator benefit from the added clarity in any scene where the tiny machines fall away. Aside from a few rounds of contained noise, Genisys benefits from digital clarity. Nothing hampers the scenery.

In terms of HDR, it’s awesome to see the time bubbles and resulting lighting sizzle on screen. This is on-par with Terminator 2’s 4K release. City lights add more intensity. The drop into shadows maintains detail into the recesses of black leather or other deep elements. Pure black is used to keep depth a prominent feature.

The blue tint that Genisys favors comes across with dense hues, nicely rendered by this disc. That’s most of Genisys. Into daylight, dominant warmth takes over, leaving flesh tones a garish pastel. That’s offset and certainly tweaked too far. That continues into the bowels of Cyberdyne too where the blues come back.

Recycling the Atmos mix from the Blu-ray, the UHD release fears nothing. Dynamic range is outright brutal at times. Genisys opens with nukes that generate tremendous thrust. As the runtime moves forward, the track only gains in power. Booming gunshots and explosions rattle a room. Two Terminator’s clash and punch one another in the climax, each strike with the potential to devastate a home theater. Schwarzenegger’s magnet-imbued hands dig way down, pushing low Hz to an extreme.

There’s plenty of positional use to spotlight, especially during the bus chase. Cars sweep through the soundstage, filling in the rears and grand accuracy. A helicopter chase does the same, sending their rotors and errant missile launches between front and rears. It’s delicate in terms of motion, wasting or exaggerating nothing. Organic design is the only thing of nuance in this mix.

The original Blu-ray release is included and identical to before. Three bonus features carry similar editing and appearances. Chances are the 55-minutes of material was a single documentary, but then split. Family Dynamics discusses casting and personalities on set. While all smiles as these usually are, information is presented in a way to make it a fun watch. Infiltration and Termination follows location shoots, action set pieces, and set building. A surprising amount of this movie was physically constructed. Upgrades peers into the VFX process. These are unusually great bonuses.

Time doesn’t help Terminator Genisys gain any traction, an arduous action flick that overrides the best parts of this franchise.

The 15 unaltered images below represent the Blu-ray. For an additional 29 Terminator Genisys screenshots, early access to all screens (plus the 12,000+ already in our library), exclusive 4K UHD reviews, and more, support us on Patreon.