The actual events of 15:17 to Paris lasted 10 minutes. A terrorist exited a train’s bathroom with an AK-47 in tow. Passengers fought back. One passenger was shot, the others overwhelmed the assailant.

This movie is 90-minutes long.

A wealth of dismal decisions go into the making of 15:17 to Paris. Notably, casting the trio of Americans onboard that train to play themselves. Heroes, yes, actors, no. Falling back to the grade school days of this trio, all childhood friends, then following them through to adulthood makes up the narrative bulk. Heroes still, interesting lives, no.

If there’s a singular scene that defines the grueling pace of Clint Eastwood’s failed adaptation, it’s a simple one. Two of the friends enter an Italian gelato shop. They browse the selections, make a choice, pay, then leave. That’s the scene. It’s three minutes. No one builds a sense of character, no dialog of consequence is offered, and none of the events in that shop create foreshadowing. It’s pointless. That goes for much of 15:17 to Paris’ runtime.

It’s clear why Eastwood took on this project. 15:17 to Paris undoubtedly came from his own hand and beliefs. Spencer Stone, the first to make the charge on the train terrorist, came from a strong Christian background. As depicted here, his childhood room held a framed American flag on the wall. He loved guns. Later, he signs up for the US military. Of course, he rushed a terrorist on foreign soil to save numerous civilians onboard a commuter train. The American, religious hero who stopped terrorism.; it’s Eastwood’s political platform, and getting it made – regardless of the end content – was essential.

It’s necessary to note a Frenchman played a key role in stopping the attack. 15:17 to Paris avoids his mention. He doesn’t warrant admiration in a pre-credits text wrap-up (there isn’t one). Heroes only come from America according to this movie, and sadly, they end up in chest-puffing propaganda like 15:17 to Paris.

Dorothy Blyskal’s script attempts to build itself around fate. Spencer talks about how he’s nearing a certain point in his life. Things happen, pushing him toward an unknown eventuality. Jenna Fischer, in a small role as a mother, speaks similarly. God told her that her son was going to be a part of something, further ingraining a layer of belief. In other circumstances, no worries. In the case of 15:17 to Paris, it’s impossible to avoid the sense of pandering to a conservative demographic, in a desperate attempt to find any narrative anchor. 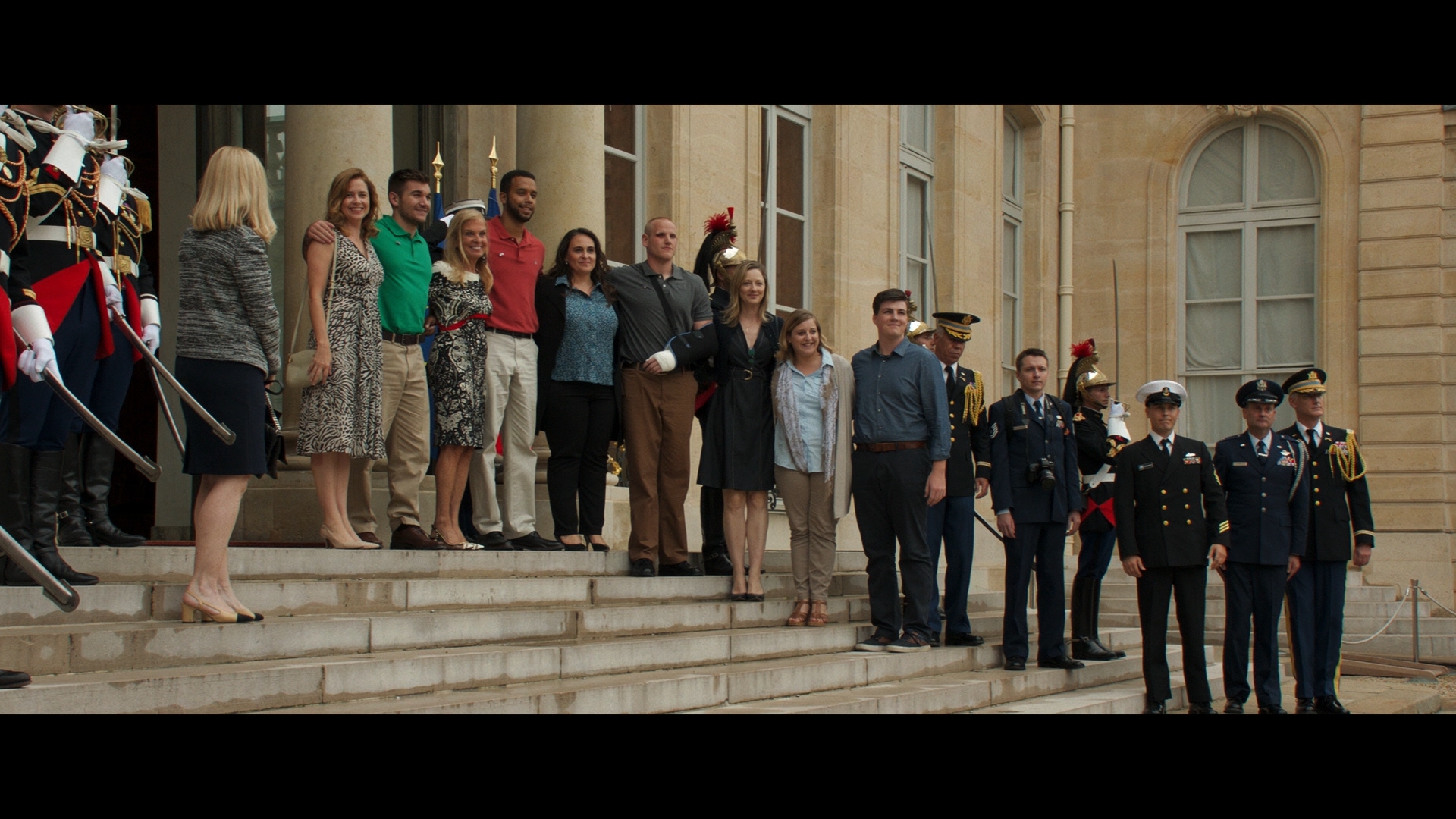 Warner chose to keep the 4K edition of 15:17 to Paris on digital platforms. Physical media is granted this Blu-ray presentation which is perfectly capable. It’s a 2K source with moderate fine detail. Facial definition spikes on occasion. Most of the best material comes from the trip through Europe and the gorgeous scenery those produce. Sharpness and clarity maintain consistency.

15:17 to Paris is a colorful one. Excellent saturation allows greens to pop and clothing to shine. A red soccer jersey worn by one of the friends in the final act pounces on the chance to show off. Accurate flesh tones settle in and won’t move.

Both Atmos and a default DTS-HD track come on the disc. There’s minimal difference. Audio design remains realistic. There’s no score until the closing seconds, leaving things open and plain. A lively train station, school interiors, and city exteriors fill in the ambiance throughout the soundfield. It’s convincing. A scene involving military vehicles pans trucks around, their engines turning up the low-end.

Be ready for a club scene. Range goes all out with a pounding beat in the subwoofer, a few decibels higher than anything else. Once on the train for the finish, a gunshot offers a spurt of bass and mild ambiance from the train car interiors fill in the mix.

Two bonuses reside here. Making Every Second Count allows the trio to tell their own story of what happened on the train. Portrait of Courage details the life story and Eastwood’s approach to making 15:17 to Paris. Neither excites, and together they run 20-minutes.

Clint Eastwood’s worst outing in the director’s seat, the frustrating and aimless 15:17 to Paris chugs along to turn a five minute event into feature length.

The 15 unaltered images below represent the Blu-ray. For an additional 17 15:17 to Paris screenshots, early access to all screens (plus the 12,000+ already in our library), exclusive 4K UHD reviews, and more, support us on Patreon.