Killmonger, Black Panther’s supervillain, is right. He speaks against mass incarceration, for civil rights, notes cultural theft, and acknowledges poverty. He lived in ghettos, lost his father, and dealt with racial disparity. In Marvel’s pantheon, Killmonger speaks to an audience of many.

Importantly, Black Panther doesn’t exploit the screen for this message. It’s not a film with images of Oakland’s projects or inner city violence, used for empathy or exaggeration. Even on an Earth besieged by aliens and magic powers, racial bias remains. This is reality. Even in comic book stories, it’s accepted without question.

The script is successful, despite an unusual structure that leaves Killmonger off screen for over an hour. Michael B. Jordan sells this role with few words. Black Panther builds him as an illegitimate leader, sacrificing tradition for the sake of war. That’s all Black Panther needs to establish commentary. Killmonger’s refusal to listen to various advisers and disturbingly single-minded rule peers into the thinning presence of an American leader, if one noting the concerns of minorities.

Black Panther is rarely a small, subtle movie. Not that Marvel movies strive to be anything other than loud, boomy blockbusters, but Black Panther does so in other ways. It’s dressed in sensational costume work. Sights flood the screen with lavish production design. Wakanda, where Black Panther primarily takes place, is the essence of beauty, free from exploitation or racial judgment – a haven where culture survives, free of discrimination.

Often Black Panther is an absolute wonder, celebrating an ideal with dance routines and traditions. Fight scenes use wild and creative strikes, elevating clashes with newfound energy. Black Panther’s greatest asset is in its differentiation. No other Marvel outing breathes with so much life in pace, visuals, and style. The score too, a rare distinction in Marvel’s series, stands out: A mix of hip-hop, African drums, and potent horn sections. Cut away from the rest, Black Panther loses nothing because of its creative spark. Place Black Panther where it belongs in the greater arc, and it still fits.

As an action movie without Marvel’s story context, Black Panther succeeds with stellar works of choreography. Fights spin and dazzle and blast color. Sadly, a visual effects fallout leaves behind visible green screen remnants and a key one-on-one confrontation is ruined by sloppy, digitally rendered avatars rather than actors in suits. It’s a crummy finish, luckily salvaged by a field battle involving dueling troops and rhinos. That’s awesome; so is the majority of Black Panther. 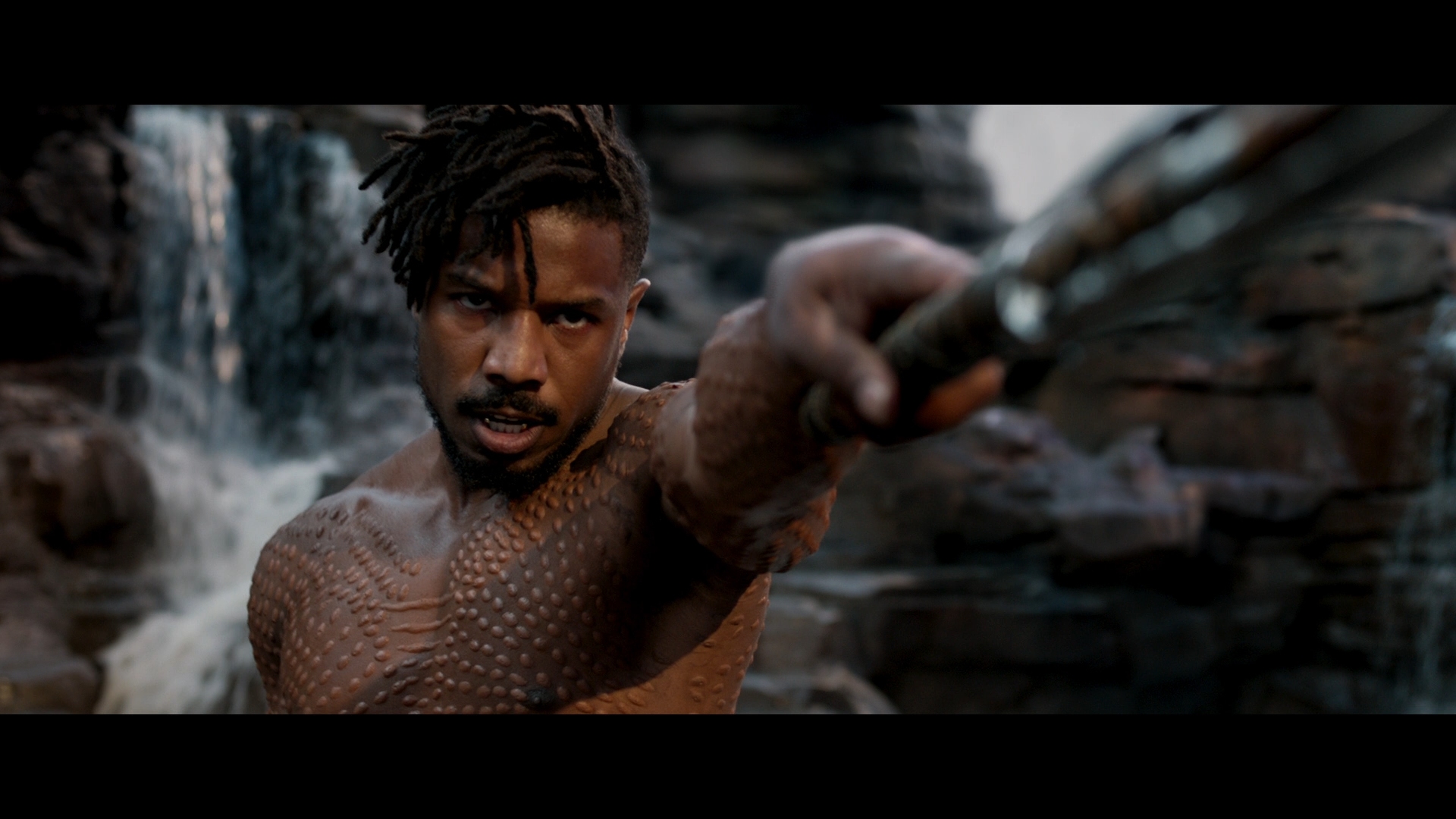 From a 4K master comes a dazzling series of images. Splendid facial definition is Black Panther’s highlight, resolved with surprising consistency. While a handful of effects shots dampen sharpness, those pass quickly. The rest of this film visually breathes with grand fidelity. Shots of Wakanda from afar handle the minutiae applied to the designs. In close, costumes show their work down to individual beads.

In terms of contrast, Disney’s disc does have a round of concerns. During the first throne challenge, cuts change brightness between edits. Close-ups of Chadwick Boseman noticeably dim, and when edits shift to the crowd, contrast increases. It’s an odd issue, and one that doesn’t occur during a second challenge in the same location.

Otherwise, Black Panther delivers a Dolby Vision presentation with slight crushing in the black levels. This is notable inside the cave set. Elsewhere, shadow detail survives. The opening shot of space offers a glimpse of pure black between stars and it’s gorgeous. Already bright cinematography is helped by HDR, glancing the scenery with highlights. A chase through South Korean streets features stunning neon signs, glowing as characters pass.

Easily the best asset though is color. Thank the costume design and resistance to overzealous color grading. Blues, reds, purples, yellows – all of them have a home, unobstructed by post-production work. Wakanda’s scenery, a mix of earth tones and greens, begs for deep color. That’s provided.

Bright and spirited, the Blu-ray is a format standout. Color splashes across the screen, flooding images with saturated primaries and other hues. High contrast images burst from the screen, and some black crush is hardly a show stopper.

Grand levels of fidelity produce high-grade facial definition. All of the costume work breaks out, resolved to the finest levels. A touch of aliasing does impact city pans, but this brief anomaly doesn’t sour the rest. Some noise pokes into the frame too, drizzling the screen in artifacts, but like the aliasing, it’s all together minor.

Welcome to a controversial mix. Black Panther suffers from compression, resulting in a far too quiet Dolby Atmos mix. Dynamic range never finds a balance until the finale. Even bumping the volume (in this case 10 notches), as with other recent Disney UHDs, doesn’t fix Black Panther.

In terms of directionality and audio showmanship, it’s fine. Bullets ping and bounce around the soundfield. Clashing swords sweep around the soundstage and vehicles make their way between channels as they pass. In the opening scene, a stereo blares in the background, panning between speakers as the camera spins.

Up until the finale though, bass response lacks power outside of a selection of hip-hop tracks. Fights feel stunted without low-end support. When the closing battle erupts, a charging rhino and a number of explosions finally activate the subwoofer to a suitable degree – this assuming the volume is boosted. Play the climax on its own and Black Panther sounds fine. How strange.

Director Ryan Coogler joins production designer Hannah Beachler for a commentary, the best of the extras. Four featurettes fall flat over their 24 total minutes. A short gag reel offers a handful of laughs. Four deleted scenes add limited information. From Page to Screen invites comic writers and filmmakers to a roundtable discussion, including the origins. It’s a great conversation concerning civil rights and Black Panther’s place in history. A chest-puffing promo for Marvel’s 10th big screen anniversary is only worth skipping.

Filled with beautiful imagery, imaginative fights, and a social conscious, Black Panther is a unique addition to the Marvel bloodline.

The 15 unaltered images below represent the Blu-ray. For an additional 30 Black Panther screenshots, early access to all screens (plus the 12,000+ already in our library), exclusive 4K UHD reviews, and more, support us on Patreon.