Gladiator’s epic feel comes from a variety of places. It’s scale, one. Seeing the Roman Colosseum at capacity is stunning. There’s a brassy, booming score from Lisa Gerrard and Hans Zimmer, second. Beefy trumpets match the muscular action. Wild and grand dialog come both before and after bloody combat scenes. Gladiator provided a number of pop culture quotables.

Russell Crowe leans into his role, able to carry Gladiator as a ferocious Roman general Maximus turned nameless slave. He looks the part, certainly, slashing and gutting his opponents as they step forward. The blood helps. Gladiator has plenty.

Behind all of this is an intriguing political state. The death of a ruler leaves Rome in upheaval. Next in line to the throne is a sniveling, entitled, incestuous coward, Commodus (Joaquin Phoenix). Politicians in the Roman senate know what’s happening. So too does Maximus, giving Gladiator a too-easy target. Phoenix is creepy and detestable enough to raise goosebumps just by speaking. It’s a stellar villain performance, if written to a degree of commercial obviousness.

Familiarity embedded into Gladiator’s core. Paramount issued the same movie five years prior and called it Braveheart. Both films tap real world history for their inspiration then spin-off on their own narrative axis. Gladiator’s rise from impoverished common slave to hero doesn’t surprise; even the hero’s onus and closure come from the depths of Braveheart. Poor rising to defeat the rich is a consistent crowd-pleaser.

To Gladiator’s benefit is a richer slate of characterization. Maximus dons the hero’s journey and typical path, but surrounding him, a small selection of personalities tug at one another. Olive Reed’s Proximo, a slave dealer, finds a way to shift the audience toward empathy for this brute. Roman senator Richard Harris spills political philosophy with a sense of calm, something modern officials need to note. And Connie Nielsen, stellar as Commudus’ sister, but never a plot device or romantic interest. Rather, she wrestles with her role and commitment to this culture of violence.

Violence there is. Gladiator opens on a spectacle of bloodshed, hokey slow motion aside. In the arena, Gladiator brings in a touch of old Hollywood – the chariots, the tigers – and the new – computer rendered set extensions and composites. That merge creates convincing drama, and Maximus’ defiance for these circumstances gives the cruelty a sense of moral place. He fights for revenge and love of country, a nationalist hero in the vein of America’s own. It’s a big budget Hollywood gem, and despite going through the paces of ordinary storytelling, Gladiator holds together after nearly 20 years. 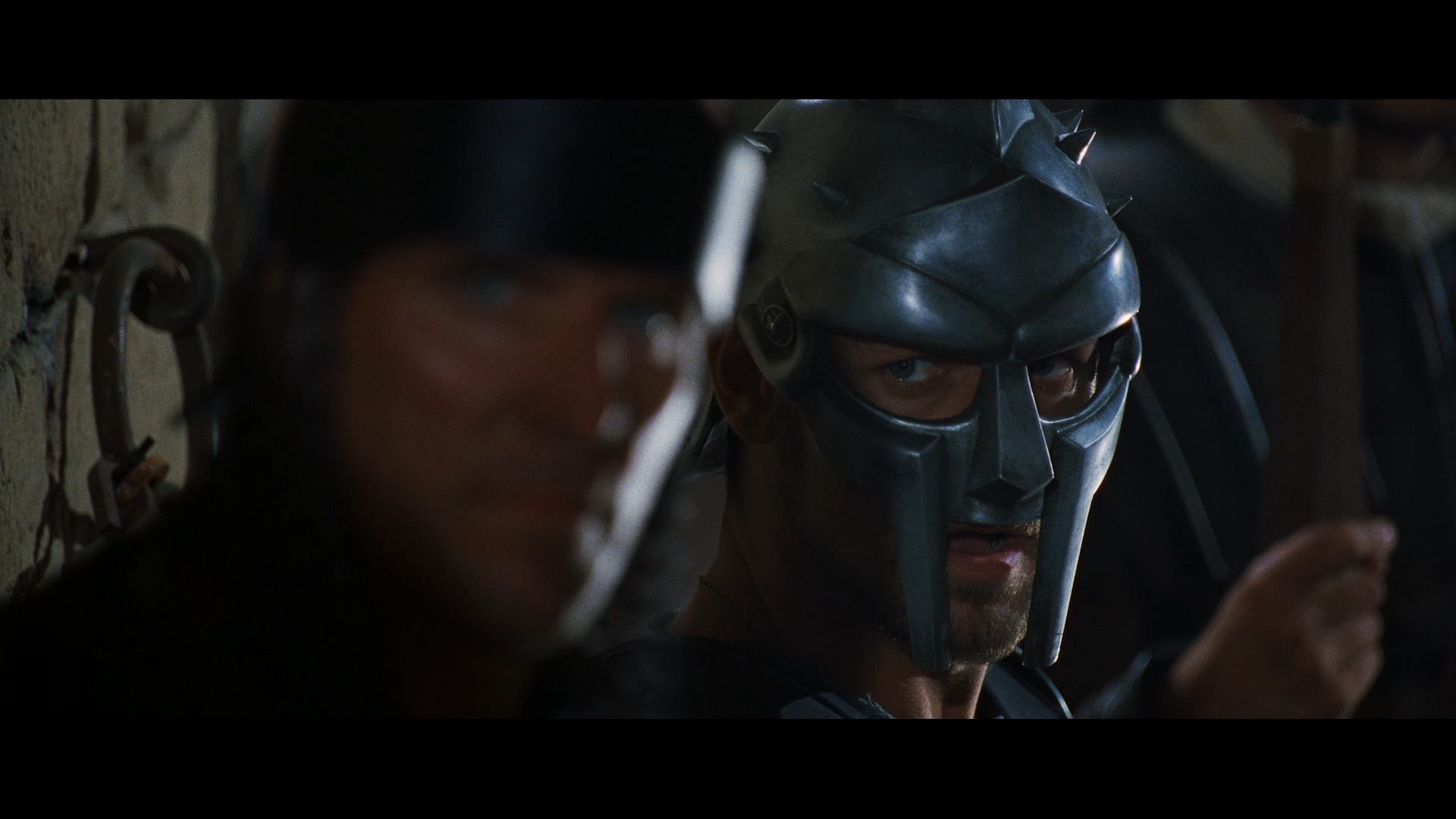 After a famous Blu-ray mastering goof led to a Gladiator re-issue on that format, no such circumstances intrude on the UHD. Instead, it’s a splendid presentation, pure 4K, with stellar grain reproduction and no visible processing.

Dated visual effects rendered at lower resolution and native softness in the cinematography do cause regular dips in sharpness. On the other side, a glamorous and pristine display. Sharpness captures the gorgeous costume work in full. Small bits of texture on robes or other clothing peer through without any issue. Facial definition pops forward. Fidelity of environments, especially the non-CG exteriors, pour resolution.

Post-production digital grading gave Gladiator two color choices. There’s blue and orange, both sweeping onto the screen in totality. Opening on a forest draped entirely in dense blues, soon Gladiator jumps to the other side, swapped out for warm flesh tones. A few primaries reside, skewed toward the preferred color.

With plenty of fire, HDR effects find their way onto the screen. The tech is great for highlights. Sitting in the sun, Crowe and Djimon Hounsou seem to glisten as the light beams in. The added zest gives life to the scenery. Black levels reach a level of true black infrequently, but never give up their sense of depth. Image density stays high, giving Gladiator plenty of dimension.

With this, Saving Private Ryan, and Braveheart, Parmount’s trinity of audio demo discs is now complete on UHD. An early DTS-ES disc on DVD, Gladiator hasn’t lost anything in this department since that release. Now in DTS:X, the rich soundstage is rife with activity. Listen as horses pan around before the opening battle. The positioning is flawless.

Once catapults light up, it’s an assault of directionality. Screaming, swords clashing, arrows, more horses, and explosions mix together in a faultless presentation – faultless though with a touch of additional volume. Gladiator is mixed a few notches too low. Bump it up a few steps for full impact.

Inside the Colosseum, crowds erupt, adding another piece to this sound mix. Chariots surge forward with grand LFE response. Likewise, they track around a full 360 degrees as called for. Once tigers enter the mix, they roar out even off-screen, properly sprouting from the necessary channel. That only adds to the intensity.

Two commentaries reside on the UHD, one for the theatrical cut and another for the extended. That mirrors the Blu-ray inside the package, with an additional bonus disc complete from the previous release. It’s nothing new, but these extras offer rich insight into the production. Not much else is needed.

Disc 2 contains the nearly ridiculous three hour plus documentary Strength and Honor, as detailed an extra feature as you’ll find. It is superb in its depth if you have time to appreciate it. If not, it splits into seven segments. Five abandoned/deleted scenes follow if that wasn’t enough, and additional art galleries continue providing content (five in total). Finally, a section of various promos, short featurettes, and trailers finish off an exhaustive set of extras.

Nearing its 20th anniversary, Gladiator tells a familiar and violent story, but the depth of its character help it to succeed.

The 15 unaltered images below represent the Blu-ray. For an additional 22 Gladiator screenshots, early access to all screens (plus the 12,000+ already in our library), exclusive 4K UHD reviews, and more, support us on Patreon.