A Gorilla Grodd and the Joker Versus Batman Anime

Splashy anime visuals and kinetic action dominate this Japanese conception of Batman traveling through time and battling some of his biggest foes. Using idiosyncratic character designs meshing Western and Eastern influences by noted designer Takashi Okazaki, Batman Ninja is like no prior outing of the Dark Knight. This is going to end up a polarizing Batman movie for fans.

Batman Ninja is more for the anime fan interested in Batman. The plot is all action and little character development, tossing in anime tropes such as giant robots and other things you really don’t expect to see in a movie about Batman. If you aren’t steeped in its anime and even manga sensibilities, this is probably not the movie for you. If you enjoy exotic anime like Kill la Kill and Ninja Scroll, Batman Ninja will be right up your alley.

Batman Ninja is really like no preceding animated Batman movie. This was written and directed by acclaimed anime talent in Japan, and was produced by Warner Japan. It stands apart from the rest of the animated DC line in both tone and artistry. If you are looking for traditional Batman adventures in the standard Western superhero mold, look elsewhere.

I believe it’s going to be tough for some fans “getting” it. Ninja Scroll fans will enjoy it more than regular Batman fans with its exciting ninja action and uniquely stylized character designs. It’s a wild, over-the-top anime with Batman and his entire family time traveling to Feudal Japan. The animation is an interesting blend of CGI models and incredibly detailed, digitally-painted backgrounds.

… the outrageous ride through Japanese history has its charms

Batman Ninja takes a journey across time as Gorilla Grodd’s new technology transports many of Batman’s allies and worst enemies to feudal Japan. The villains take over the forms of the feudal lords that rule the divided land, with the Joker taking the lead among the warring factions. As his traditional high-tech weaponry and gadgets are exhausted almost immediately, Batman must rely on his allies, including Catwoman and extended Bat-family members, to help a ninja clan restore order to feudal Japan and get back to the present.

Anime fans should already know what to expect from Batman Ninja. It’s a refreshingly original and alternative take on Batman and his mythos set in a different time period filled with samurai and ninjas, filtered through Japanese cultural sensibilities. The stunning animation is lively and looks nothing like anything previously seen with DC characters. While it does stretch and push the boundaries of what we’ve come to expect from Batman’s universe, the outrageous ride through Japanese history has its charms. The cheeky English dialogue gets the more well-known characters down correctly but feels off for characters like Robin and some of the villains.

If you aren’t prepared to see giant robots fight in feudal Japan and Joker forming what appears to be Voltron, stick with more traditional Batman films. Batman Ninja is insane and crazy at times. I say that with nothing but good feelings toward the movie. The epic action sequences and wild character designs are worth the price of admission alone. 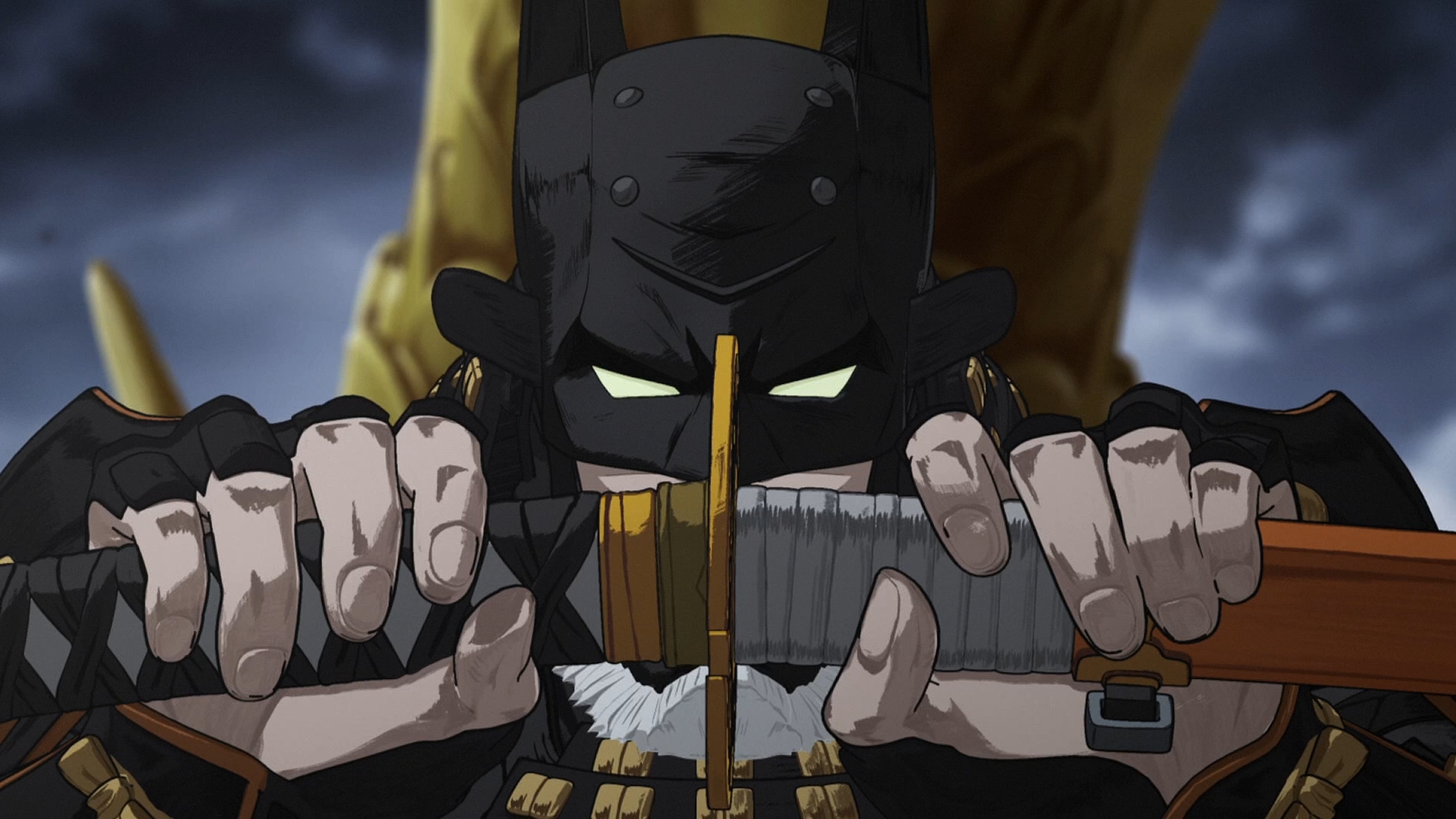 Animated by Kamikaze Douga, Batman Ninja is easily one of the most stunning animated DC films ever made. This is an anime production through and through, from noted character designer Takashi “Bob” Okazaki (Afro Samurai) handling the designs, to its blend of 3-D cel shading and CGI models against digitally-painted backgrounds.

The 1.78:1 presentation makes its presence felt in 1080P resolution, offering some of the most fluid and kinetic animated sequences since Kill la Kill and other cherished anime productions. Some minor aliasing and other compositing issues are endemic to this type of animation.

The 85-minute main feature is encoded in AVC at moderate video bitrates, clocking in around 15 Mbps. Like prior animated DC movies, a hint of banding may be apparent on the biggest displays. It’s a steady compression encode that dutifully captures the bright, colorful designs without significant artifacts. The consistent black levels and fine contrast help render Batman Ninja’s vividly painted world, offering rich HD video. The digital transfer sports no obvious flaws.

Batman Ninja has been designed around its impact visuals and this Blu-ray presentation should light up any decent home theater.

The primary bad news here is that the Japanese audio is only offered in 5.1 Dolby Digital at 640 kbps. The English soundtrack gets a full 5.1 DTS-HD MA treatment. For Western viewers, the English-language soundtrack is the better choice, both in terms of sound design and comprehension.

This is a solid, if fairly typical, surround mix for new animation. Composer Yugo Kanno’s Eastern-flavored score could be integrated better within the soundfield, as certain audio elements don’t have the sweep and directionality we’ve become used to on Blu-ray. Anime productions tend to go lighter on the expansive sound design. The dialogue is cleanly reproduced and mastered nicely in balance with the action. Some bass is present but one wishes for more in a few critical scenes.

Fourteen different optional subtitles are offered in a white font. English SDH is provided for the English dub and a separate set of English subtitles are included for the Japanese-language soundtrack. These are not Dubtitles, if you are worried. The English translation of the Japanese audio is quite rudimentary. I’ve seen better on other anime. Seven different dubs are included in 5.1 Dolby Digital, from French to Spanish.

The included digital code is good for both UltraViolet (UV) and Movies Anywhere (MA) if redeemed on VUDU. You also get the bonus on VUDU of receiving both the English-language version of the movie and one with the Japanese audio. It redeems in HDX video quality.

This is a strong set of special features for a major studio release in this day and age of lightweight EPK featurettes. The Japanese director, writer and character designer are all interviewed across them, subtitled in English. The American producers supervising the English dub are also featured.

East / West Batman (17:33 in HD) – A strong examination of the film’s creative process with interview snippets from the filmmakers behind both the Japanese version and the English production. Mike Carlin, the supervisor of DC Animation, is included among others behind the film. This documentary looks into some of the Western tropes and archetypes from superhero entertainment, meshed into the world of feudal Japan. The trappings of anime from the East takes on Batman’s world.

Batman: Made in Japan (14:03 in HD) – Afro Samurai character designer Takashi Okazaki explains the process behind bringing the proper mix of style and energy that is unmistakably anime to various Batman characters. The filmmakers discuss the Japanese character models, historical influences and animation.

New York Comic Con Presents Batman Ninja (49:02 in HD) – Meet the talented Japanese filmmakers behind Batman Ninja as they discuss their inspirations and challenges in bringing an anime version of Batman to life during a panel discussion unveiling Batman Ninja during New York Comic Con 2017. This panel features questions from the audience and a moderator provided by Warner Bros.

Teen Titans Go To The Movies! Trailer (01:34 in HD) – This sneak trailer plays before the main menu.

Justice League Trailer (03:41 in HD) – A UHD promo plays before the trailer.

A wild Batman anime set in feudal Japan featuring many of his friends and villains. Batman Ninja is more for anime fans than regular Western superhero entertainment.

The unaltered images below are taken directly from the movie’s Blu-ray. For an additional 12 Batman Ninja uncompressed screenshots, early access to all screens (plus the 12,000+ already in our library), exclusive UHD reviews, and more, support us on Patreon.