Beatrix Potter may or may not have liked this pop entertainment adaptation of her book Peter Rabbit. The world will never know, but certainly, Peter Rabbit has a blast with the source material. As a contemporary, studio-bred kids fantasy, it’s a joy.

Peter here, voiced by James Corden, is a snippy rodent. He carries an attitude and enjoys brawling with a local gardener. It’s barely skirting Potter’s source material, but finds a way to twist itself into a madcap, small time adventure.

There’s a surprising morbidity to Peter Rabbit. That’s new. At the end of the second act, Peter Rabbit recalls the mayhem of Home Alone, inducing pain on Domhnall Gleeson in rambunctious, clearly unsafe ways. There’s a rooster (a bit part) who regrets getting up in the morning – he’s about to deal with hatchlings. An early character dies of a heart attack; Peter enjoys watching the “ice cream truck” cart the corpse away.

Peter Rabbit is the antithesis of Paddington’s syrupy sweetness. Although the two films vary (greatly so) in their approach to the genre, both manage similar entertainment value. No surprises await in Peter Rabbit’s script. It’s utterly barren of original plotting. Yet, it takes digs at itself for such. A few moments break the fourth wall and a narrator verbally winks at the climactic, romantic cliché. That’s gold, and turns the final moments of Peter Rabbit into a sly parody.

From the outset, there’s a springboard of energy, both in terms of physical action and comedy. Birds playfully sing over the opening credits until Peter runs them over. “It’s not that kind of movie” spouts the narrator. That’s the cue for a number of familiar, safe pop songs. Yet, their choice is smart and by the time Peter Rabbit finds appropriate use for The Proclaimers “I’m Gonna Be,” the film already won. That whimsical selection is an additional merit trophy.

Over the closing credits (and stick around for a bit), Peter Rabbit makes sense of itself. A story about a turf war between humans and varmints spins a ditty called “No Hate.” It’s loose fitting considering the exceptional level of cartoon violence brought to the screen before, but a potent closing note. Violence solved nothing. Neither did hate. Rather, the escalation harmed everyone, even bystanders. Peter Rabbit: The Home Alone-stealing, Proclaimers-playing, anti-war film… for kids. 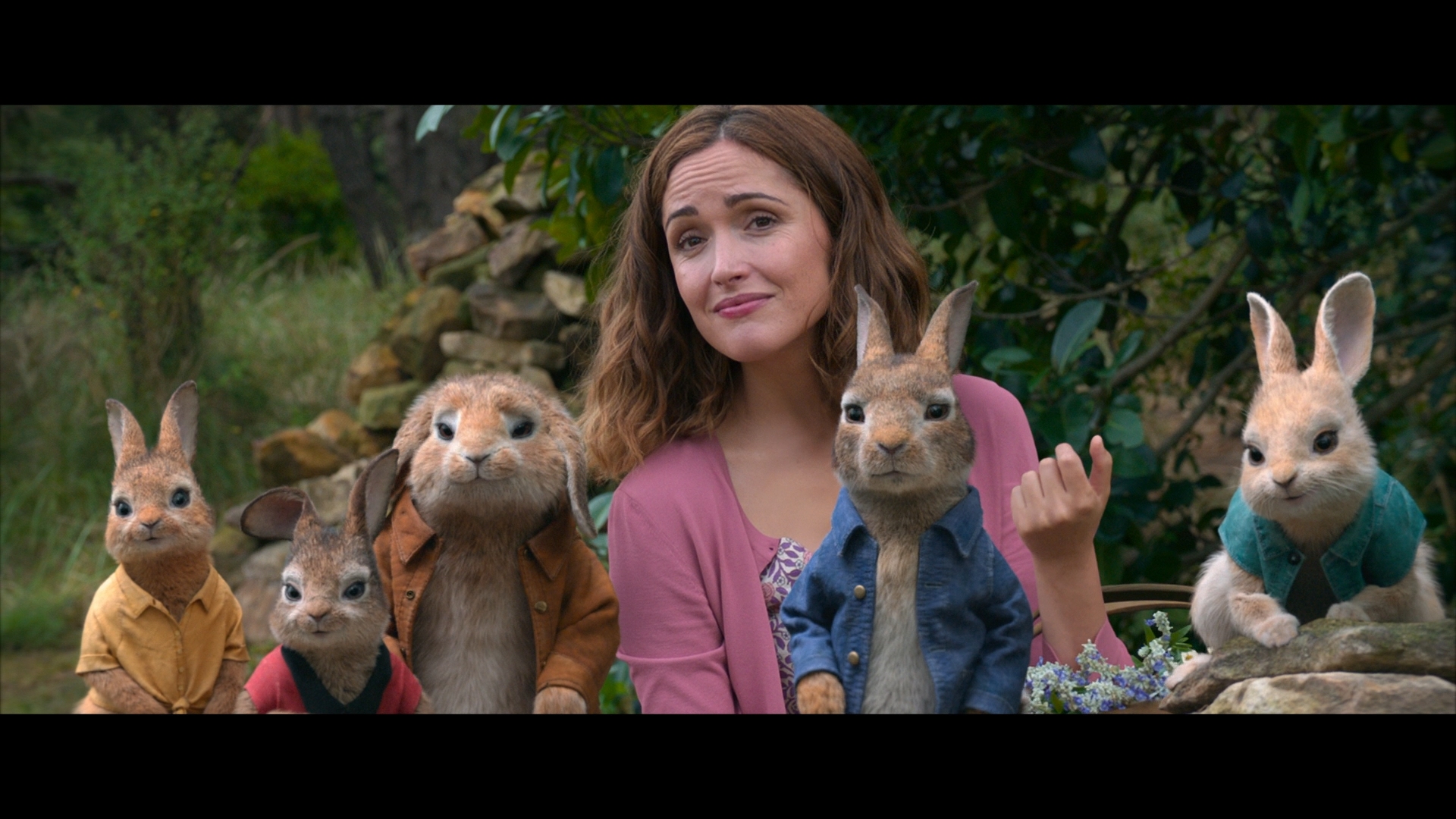 The 2K finish of Peter Rabbit leads to a rudimentary UHD presentation. CG elements, the rabbits in particular, lack the fine definition of other live action/CG hybrids. Outdoor scenery from an Australia location shoot never finds the right mark. It’s lacking sharpness. All of the greenery and plots of trees wilt when under the 4K spotlight.

Even HDR effects dwindle. Spots of light pop, although with minor effect. Peter Rabbit plays out under gray skies, robbing the film of contrast. When night falls, black levels do well to maintain image density, even if noise still visibly invades the digital imagery.

Other than those few bouts of artifacts, Peter Rabbit maintains clarity. Oddly, this isn’t a bright, colorful film. Dour shades of gray and pasty primaries fail to enliven things. Natural flesh tones tones, and Peter Rabbit looks weirdly natural for a story of dancing, talking animals. There’s no spark to give this one visual energy.

Here’s a rare instance where the articifiality of Blu-ray’s color and overall brightness best the UHD. Detail runs along the same arc, flat and showing limited sharpness. The two formats equal out there.

The rest of Peter Rabbit’s Blu-ray is successful, with brighter overall contrast. Noise is more persistent and black levels fall from UHD’s depth, yet these concessions won’t drain the life. For a majority, Peter Rabbit suits itself to this format better.

Spurts of vibrancy spread across this Atmos mix. While consistency isn’t a notable quality, pans across the front soundstage do stretch the material, if with limited width. Voices of running rabbits reach the stereos, as do their steps hitting the ground. An occasional drop into the surrounds is notable mostly because how dead the back channels run.

When the war reaches the point of dynamite explosions, the subwoofer joins in after merely supporting the soundtrack before. Depth is meager, yet sufficient to match the scale of the blasts.

Mischief in the Making is the only behind-the-scenes material here, a derivative seven minute piece that’s easily skipped. A dance along is one for the kids and a mini-movie is truly mini at under four minutes.

Peter Rabbit is a resounding success, mixing a touch of morbidity into a typical romance and family fairy tale.

The 15 unaltered images below represent the Blu-ray. For an additional 15 Peter Rabbit screenshots, early access to all screens (plus the 12,000+ already in our library), exclusive 4K UHD reviews, and more, support us on Patreon.