Three movies in and it’s still not clear what the Maze Runner villains – subtly named WICKED – ever hoped to accomplish. Maze Runner’s world is one where a virus wiped out mankind, leaving civilization in ruins. Some teens were immune though. How lucky, but WICKED tries to kill these teens. The ones they don’t end up experimented on in the hunt for a cure.

Assume they find the cure. Then what? Do they sell it to the zombiefied infected? What’s the long term game?

Death Cure doesn’t answer any of those questions. It’s outright ignoring them. After spending one film establishing the mystery of a maze and the second running from derivative zombies, Death Cure is the all-out war. War for what never quite becomes clear.

Death Cure’s third act is a litany of shoot-outs and near escapes, keeping the film topped with energy, if not the core logic

The benefit to Death Cure is a bevy of high-grade set pieces. Opening on a train heist, the excitement and tension is immediate, despite an improbable amount of villains with the aim of Star Wars Stormtroopers. Scale and speed make for a sensational sequence, matched later by a rebel strike and implausible (but fun) bus/crane escape. Death Cure’s third act is a litany of shoot-outs and near escapes, keeping the film topped with energy, if not the core logic.

At the center of everything is Thomas, whose escape in the first Maze Runner (somehow) turned him into a carrier for the antibiotic. That’s more metaphorical than anything – heroes save more than those they hold in direct contact. Forever the good guy, Thomas’ traditional, even bland output finds him slugging it out with villains and doing all he can to save his friends.

Thomas isn’t Death Cure’s strongest character. That’s Teresa (Kayla Scodelario). Over three films, her bouncy character arc threaded morality. Here she’s desperate to find a cure, coming to terms with the potential cost (even to Thomas) and long term benefit. All of Death Cure rides on her. If Maze Runner’s lore supported greater consequence, maybe it spawns into a memorable teen series. Instead, aside from the capable action design, Death Cure fails due to haggard mythology. 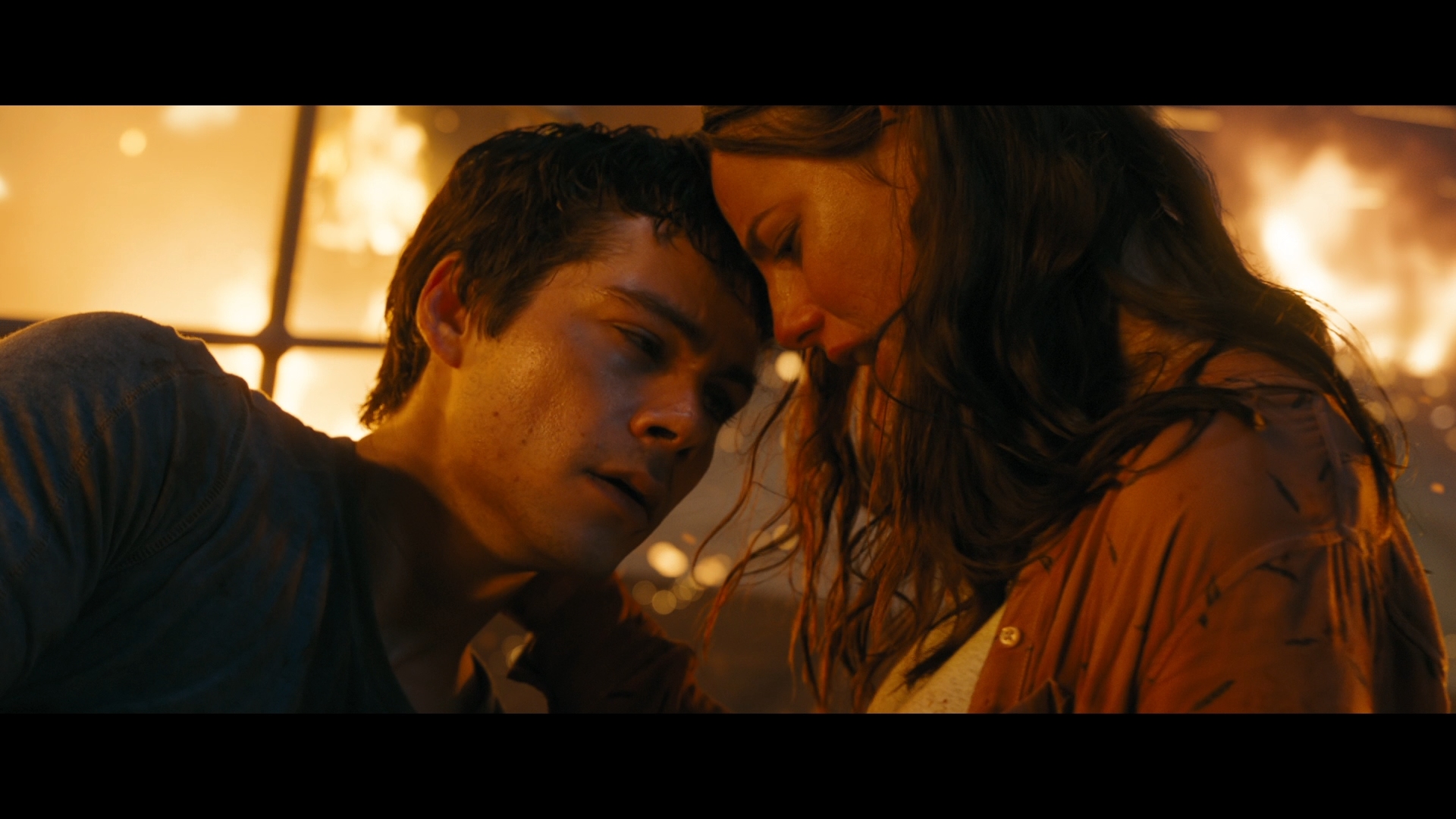 Here’s an example of how HDR can elevate a 2K master. Sensational brightness and depth continue for the entirety of Death Cure. Opening with an intense blast of sunlight, drenching the screen in intense contrast, scenery looks gorgeous. Later, when into the city, the flawless black levels butt up against heavy lighting from the skyscrapers. Interiors likewise bathe themselves in focused lighting.

Opening with rich earth tones, the first act continues with this attractive palette. Later, it’s a drop-off into orange and blues, sapping some of the life, but again, the HDR elements pick up any slack. It can’t be overstated how much this disc’s output literally shines.

While the two prior Maze Runners were UHD underperformers, Death Cure ups the quality with pinpoint sharpness. Digital effects of battered cities can pass for 4K sourced with their definition. So can many close-ups, helped by the dominating contrast. Firm detail maintains consistency with few moments that drop-off. With only mild digital noise, clarity adds to this beautiful presentation.

The color, which begins in an attractive earth tone-based palette, sours as Death Cure moves into all-blue interiors. Flatness steps in and there’s a loss of visual appeal. Flesh tones muddy too.

With ferocious dynamic range, the Atmos mix included with Death Cure is a dazzler. Opening action rumbles the low-end with a passing train, pierces the soundfield with bullets, and pans vehicles effortlessly. Nothing is missed or subtle.

Explosions and building collapses fill the third act, a consistent performer that keeps up the sonic energy. A tense bus ride creaks metal around the room and a tunnel attack by zombies show how precise this mix is. Dialog travels from the center as needed.

Series director Wes Ball joins screenplay writer T.S. Nowlin and producer Joe Hartwick for a commentary track. That’s on both the UHD and Blu-ray. Everything else sits on the Blu-ray alone.

That commentary continues over 11 deleted scenes, plus Ball comes back for visual effects breakdowns. Unlocking the Cure serves as a typical making-of without much in the way of depth. Peek at the opening action scene via Going Out on Top, and one of the longest gag reels in some time runs a touch over 11-minutes.

The 15 unaltered images below represent the Blu-ray. For an additional 19 Death Cure screenshots, early access to all screens (plus the 12,000+ already in our library), exclusive 4K UHD reviews (including the first two Maze Runners), and more, support us on Patreon.