The Post doesn’t only concern itself with the 1971 decision to publish The Pentagon Papers. While it’s easy to draw on All the President’s Men for comparison, that ignores The Post’s tenacious story of a women taking command of a male-dominated profession. Also, the depiction of journalism versus capitalism, a front line clash that impacts the printed word.

There’s still news; it’s critical to The Post. Ben Bradlee (Tom Hanks) is often at his desk, mulling over the risk in publishing classified documents. That’s a number of crucial, involving, and dramatic scenes. Newsroom tensions spill out from the Post building and into homes. Journalist dedication goes beyond posted hours. The Post covers all aspects of this business, and often with a sentimental eye; cinematographer Janusz Kaminski’s signature lighting casts a dream-like glow over these locations.

The Post is directed with a judgmental eye, mostly seething at the current Trump administration. It’s clear why this film exists in 2018, a reply to frequent and public admonishment of press corps by the sitting President. Links to the Nixon White House (using authentic phone recordings) further shame the current state-led spin. The parallels are eerie in their accuracy.

Late in the film, Meryl Streep rattles off a lyrical, even overstated defense of a free press, and certainly, the overarching narrative of press against a rattled administration draws further ties. The Post is outright vicious in its defense of reporters, rightfully poised to defend journalists and their cause. The eventual Supreme Court decision is a moment of triumph; the fallout re-establishing free speech and separation from political influence is worthy of cheers. Spielberg lands these key moments with his deft hand.

Streep is the centerpiece here as Washington Post owner Kay Graham, repeatedly walking into male-dominated board rooms. One shot shows her passing rows of female secretaries, only allowed outside of a key meeting, as Streep continues into a hostile all-male crowd. The Post deals with the Pentagon Papers as a turning point for journalism and equality, a critical historical juncture that removed conflicts of interest and placed women in power. The Post ably casts a sense of social progression forever linked to the era. Vietnam served as a cruel catalyst for change.

Even with some artificial posturing on behalf of writers Liz Hannah and Josh Singer, The Post tells this story with satisfying cadence, leaving the story on an inspirational beat even when considering the business’ current status. Free speech wins and the country functioned as intended then, a necessary sign that even in sour periods of history, the U.S. will still protect those deserving. 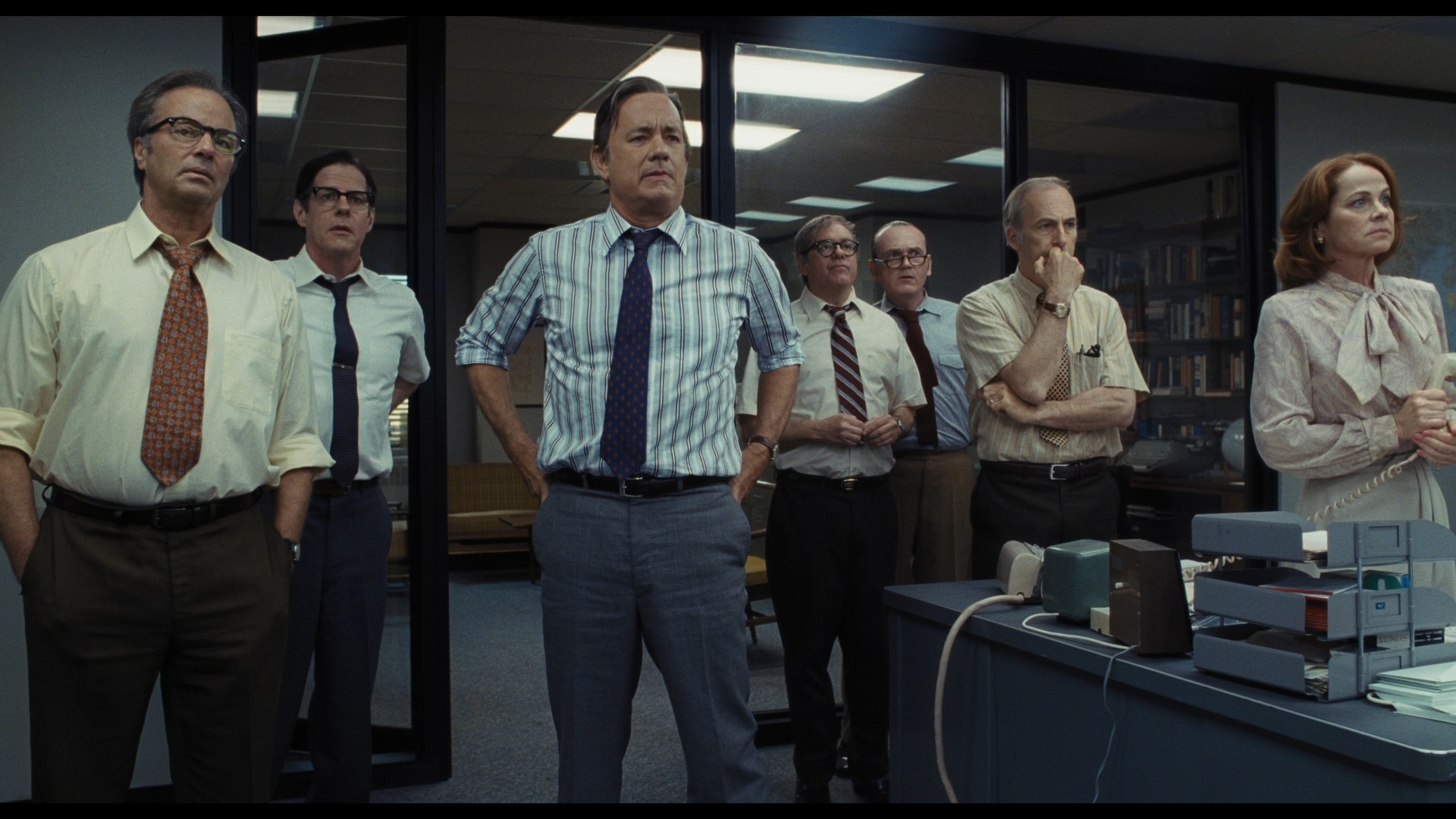 A soft HDR pass sits over The Post, delivering a dry imagery with few instances of true black. Soft lighting limits peak contrast. The same goes with color, dusty and with chalky flesh tones. It’s a ’70s era aesthetic to an extreme.

There’s a film-based source behind the meager HDR though, delivering resolution at tremendous levels. Facial detail shows off and the sets provide awesome minutiae. Long shots in Streep’s office are one example. Books in the background show legible titles on their spine. Sharp lines on an old radio won’t fall to any aliasing.

Fox’s disc manages a clean grain structure, at times almost invisible without any errant processing. The Post pushes natural imagery and clarity, but by design, lacks the pop of other discs. The additional resolution is a definite bump over the Blu-ray however.

Spielberg’s film looks outstanding on Blu-ray, offering resolute sharpness and fidelity. Deep sets challenge the disc to maintain clarity. Other than window blinds shimmering as the camera pans, The Post avoids the likely pitfalls of aliasing. Facial definition is exquisite and clear, elevating the imagery.

Film grain sits over the image (well resolved at that) merging with the color palette to present a vintage look. Drab, dusty colors portray a historical look, then further blending with the Kaminski’s sense of ‘70s cinematography. Flat grays in the newsroom and blandly colored Washington exteriors still look great, and flesh tones manage to stand out.

All of this fading does drop black levels to a lesser level on occasion, lacking the full density they’d likely otherwise carry. They deliver on plenty of occasions though, especially during an opening war scene. Any loss is to little detriment considering the ferocity of contrast, blooming into the image with plenty of energy. Brightness isn’t lost at any stage. Lights potently filter in through windows and onto exteriors.

Using the full width of a DTS-HD 7.1 soundstage (the same on UHD and Blu-ray) The Post excels in capturing the vibe of the era’s newsrooms. Typewriters clack in each speaker. City streets light up with sound, from cars to general noise. Interior parties swell onto the stage, wide and vibrant. Precision is masterful, willing to push dialog from the center and into any channel needed. It’s robust.

The Post opens in Vietnam, stretching the soundstage with rain, helicopters panning around, gunfire, and even bombs to test the LFE for a touch. This is great work.

Five featurettes end up on the disc, and this is a stellar set of bonuses. Layout runs 21-minutes, following the real world events and the key players, a feature built with excellent production values Editorial spends 15-minutes talking about the cast, while Style Section is a better choice to watch, 17-minutes detailing the dedication to production design accuracy. In Stop the Presses, Spielberg and crew breakdown The Post technically, a strong 25-minute piece. Finally, John Williams is given his due in Arts & Entertainment, a seven minute look at the score.

Meryl Streep and Tom Hanks pair for The Post, a superb retelling of the journalistic chaos surrounding the Pentagon Papers.

The 15 unaltered images below represent the Blu-ray. For an additional 15 The Post screenshots, early access to all screens (plus the 12,000+ already in our library), exclusive 4K UHD reviews, and more, support us on Patreon.