The Film Comic Book Fans Have Been Waiting For

The theatrical Suicide Squad film with Will Smith and Margot Robbie from Warner did major box office business, proving the team first seen in DC comic books is undoubtedly popular. Fan reaction to the film itself was mixed despite the financial success, possibly affected by the general response to Warner’s slate of DC Comics’ superhero movies over the past decade.

If you were disappointed by the live-action theatrical movie, Suicide Squad: Hell To Pay is a vastly more entertaining animated spin on the same idea from WB Animation and DC Comics. This take on the Suicide Squad has far more interesting characters. It’s sheer anti-hero fun aimed to please fan audiences with its callbacks and nods to the wider DC universe of characters. When obscure characters like Steve Ditko’s Punch and Jewelee show up, it can’t help but have fans scrambling to search online for their comic book histories.

Led by Christian Slater voicing Deadshot and Vanessa Williams voicing Amanda Waller, the immensely fun world building is filtered through a take-no-prisoners narrative. The slick script stays true to the familiar supervillain protagonists as characters without getting overly restricted to superhero genre conventions. It’s always been easier subverting superhero tropes in a Suicide Squad book or adaptation, since the characters are all villains on some level.

Take a group of supervillains out of prison and offer them reduced sentences if they’ll go on a suicide mission for the government. For desperate criminals, the offer is usually too tempting to pass up. That is the gist of the Suicide Squad’s main mission.

Amanda Waller’s top secret “Task Force X” team this time comprises of Deadshot, Bronze Tiger, Killer Frost, Captain Boomerang, Harley Quinn and Copperhead. Deadshot is put in charge of the team. Faced with a terminal illness, Waller forces the Suicide Squad on a personal mission to retrieve a stolen mystical artifact from Dr. Fate. The artifact sends the person possessing it directly to heaven when they die, which makes it attractive to several different groups of villains, including the immortal Vandal Savage and others. The race is on for the mystical prize as the Suicide Squad confront a wide range of fearsome supervillains.

Suicide Squad: Hell To Pay lets you know early that it is not like prior entries in the animated DC canon over the past decade. In the slick opening set piece, Count Vertigo’s head explodes. It’s a shocking moment that tells you the normal rules of superhero storytelling are over. He’s not the last b-list supervillain that loses his life over the course of the film. The movie earns it’s ‘R’ rating with swearing, flashes of animated nudity and violent adult themes. The freedom enables a more mature, sophisticated form of storytelling than is usually found in popular superhero fare.

Having seen all the animated DC films, Suicide Squad: Hell To Pay is clearly one of the most entertaining for long-time fans and requires little foreknowledge of these characters since it’s mostly self-contained. There is a nice and surprising payback to an earlier animated adventure I won’t spoil in the third act. It smoothly balances the necessary character development and crisp action without slowing down over its relatively lengthy 86 minutes. In tone and execution this feels like a big-screen Hollywood adventure that happens to be animated.

This is what the Suicide Squad movie with Will Smith should have been like. It’s a smarter, slicker and more entertaining take on a rag-tag group of villains forced to work against their natural impulses. 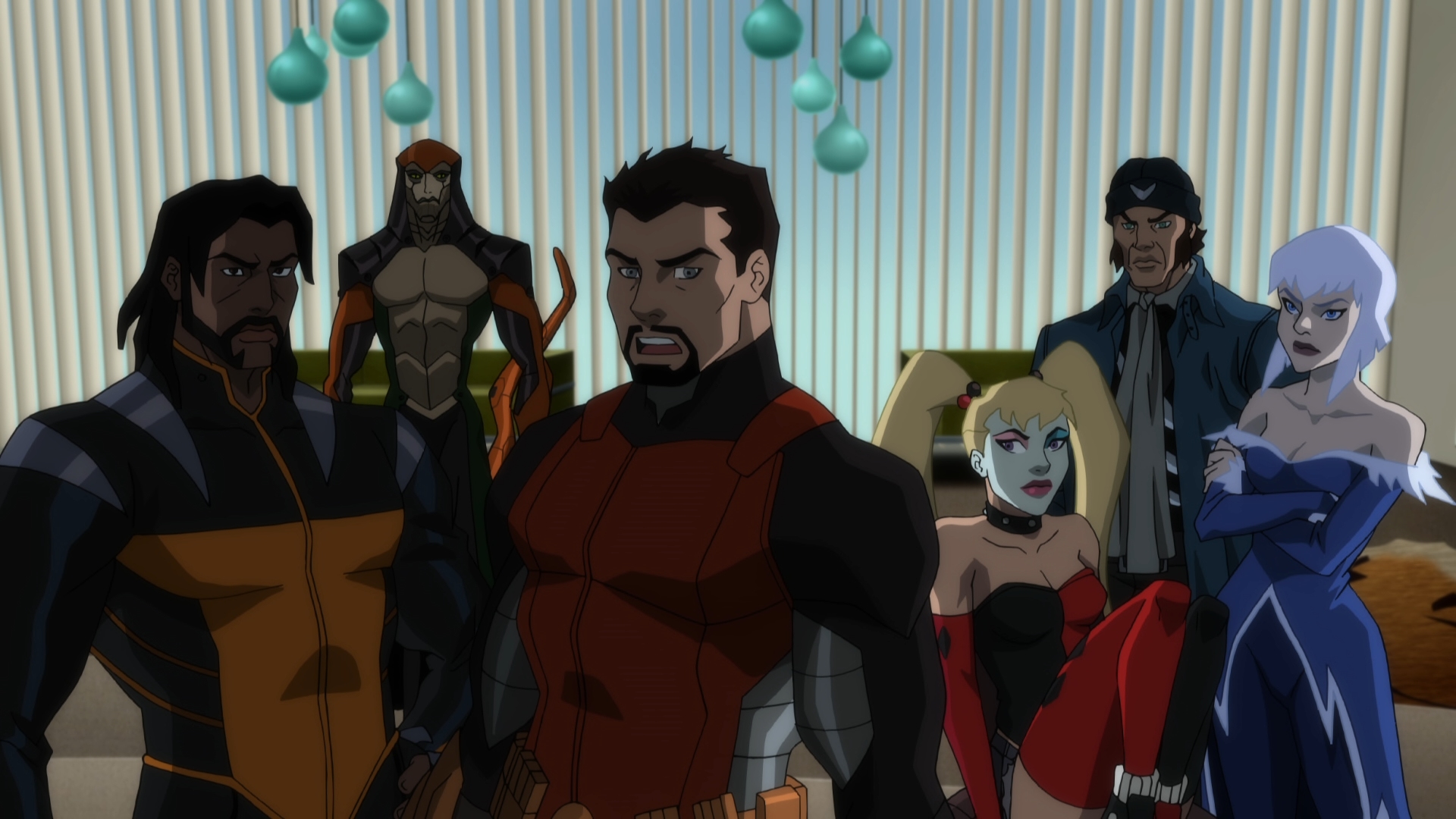 Making full use of dynamic range, the intense highlights of muzzle flashes, Gotham’s skyline, or other lighting butts up against the overall dark tone. Contrast is absolutely stellar. This means great black levels too, adding to the dimensionality of this 2D production. Amanda Waller often sits in backlit scenery and there’s no loss of definition in those shadows.

Banding remains and given the simpler nature of the animation, that’s likely an issue with the source. Otherwise, imagery is pure and clean, with stout color a stand out. Occasionally bright primaries (greens in particular) buck the trend of denser, more muted color elsewhere. Suicide Squad loves misery, and the palette is in tune.

Sharpness isn’t peaked, a 2K source undoubtedly. Line work looks great however and won’t deal with any aliasing or break-up. Flashbacks use a grain filter for added grit. The encode handles that artificial filter without compromise.

Fans familiar with WB Animation’s line-up of animated DC Universe movies should largely know what to expect by now when it comes to their picture quality attributes. Suicide Squad: Hell To Pay unfortunately takes a step back in their line-up’s recent picture quality with rampant banding. The 1080P video is replete with it, likely endemic to the original animation files. It’s clear the textures weren’t properly shaded and dithered by the animators, leaving darker shots with the familiar concentric light bands radiating out on some surfaces. It’s unlikely the AVC encode, despite lower bitrates, is responsible.

The 86-minute main feature is shown in its native 1.78:1 aspect ratio. The 1080P video has fine color fidelity, though this isn’t the brightest or most saturated animated production. The more realistic palette helps limit the video’s definition and dimensionality.

The animation is clean, translated directly from the digital animation files without processing. The movie’s character designs are better than usual and more consistent from scene to scene than we’ve seen lately from WB Animation. While it lacks the creativity and refinement of theatrical features, this is mostly fluid animation with striking detail.

Suicide Squad: Hell To Pay has a serviceable Blu-ray presentation hampered by widespread banding issues inherent in the animation. It doesn’t look that different from previous animated DC movies if you can ignore the banding.

The 5.1 DTS-HD MA soundtrack has a respectable, solid audio mix. The bass has decent extension and clarity is impeccable as you would expect from an animated production. Dialogue reproduction is consistently excellent, even if Christian Slater seems to mumble his way through a few lines. The discrete surround mix has effective panning and a fairly well-defined soundstage. This isn’t an earth-shattering soundtrack that overwhelms you like some action movies. The nice dynamics remain tight even in the most active scenes.

Optional subtitles include English SDH, French, German, Portuguese, and both flavors of Spanish (Latino and Castillian). They display in a white font. Each foreign-language dub mirrors the available subtitles, usually offered in Dolby Digital at 640 kbps.

Suicide Squad: Hell To Pay arrives in a UHD and Blu-ray combo set with a slipcover. Also included is a digital Movies Anywhere code that redeems in UHD quality on the MA website. The featurettes are largely forgettable if you are familiar with these characters. The audio commentary is the special feature worth paying attention to in this set. It’s an enjoyable discussion by veteran animated DC producer James Tucker and long-time scribe Alan Burnett. Tucker and DC Interactive VP Ames Kirshen are the go-to interviewees for the featurettes.

An exclusive steelbook edition can only be found at Target. Best Buy gets an exclusive Blu-ray gift set that includes some sort of squarebound booklet.

A Sneak Peek at the next DC Universe Movie, The Death of Superman (07:06 in HD) – This sneak peek at the next DC film discusses the story and its place in pop culture. We get glimpses of the character designs (which are New 52 based) and some insight by the film’s co-directors.

Outback Rogue: Captain Boomerang (05:14 in HD) – This featurette provides a concise recap of this Flash villain’s long history and his transition from goofy villain to menacing threat.

Nice Shot, Floyd! The Greatest Marksman in the DCU (05:36 in HD) – Central character Deadshot receives the focus in this featurette, detailing the changes in personality and costumes he’s endured over the years.

The Power of Plot Devices, MacGuffins and Red Herrings (10:30 in HD) – An examination of plot devices and how they influence story development. This featurette isn’t afraid of going outside the animated DC universe for references, pulling in clips from Casablanca and other classic movies for illustrative purposes.

Audio Commentary – The creative filmmaking team of screenwriter/co-producer Alan Burnett and executive producer James Tucker share their candid thoughts on the characters, themes and structure of Suicide Squad. This is a fun, engaging discussion centered on the movie. It provides an inside look at how the characters and key plot details developed over time.

A thrilling animated Suicide Squad adaptation that puts previous attempts to shame in execution and wit. If you’ve grown bored with DC’s slate of films, look here for something different.

The unaltered images below represent the Blu-ray version. For additional Suicide Squad uncompressed screenshots, early access to all screens (plus the 10,000+ already in our library), exclusive 4K UHD reviews, and more, support us on Patreon.