In those moments where Jumanji isn’t over explaining itself, there’s a story with a high moral center. Four high school kids, neatly fitting into standard archetypes, get sucked into a videogame and when inside, overcome their social fears. The jock, the nerd, the cool girl, and the quiet girl wrestle with a jungle, coming to learn their individuality matters. That’s all fine.

As a fair fantasy, it’s enough to keep this hyperactive sequel (reboot?) moving forward. Over indulging in computerized animals and wonky action, the slower moments act as a merciful reprieve from visual effects.

In order to stuff all of that action into a two hour frame, that means Jumanji needs to spill hard exposition – and about everything. All of the rules, all of the game’s tricks, all of the events; each is explained in expanded detail, ensuring the audience doesn’t miss anything. Jumanji doesn’t even need much of this. It’s straightforward fantasy, but seems intent in ensuring all of this is properly contextualized.

That takes away from letting these characters play out of their type. Dwayne Johnson as a meek nerd suddenly gifted with significant pecs is a grand bit of casting. Jack Black as a 16-year old girl? Maybe not as much. He comes across as an outmoded gay stereotype more than a teenage girl. It’s painful in spots.

1995’s Jumanji lacked greatness, but its ability to reconcile difficult topics like grief added merit. Twenty years on, social change leads to a story about not being judgmental and learning why differences carry value. That’s simple, fairy tale stuff and Jumanji takes ages to deliver on that core idea. It’s often obsessed with action, running long and tiring. The value though is in that message, even if bringing people together to cooperate as a team is running its course in modern cinema.

Jumanji does meet high school standards. That age group will undoubtedly giggle at an expected flurry of PG-13 penis gags (most will at any age, actually) and the zany, exaggerated addiction to cell phones plays to that same audience. A touch of predictable, rote romance works as needed, treating the situation as a nerd-gets-the-girl cliché.

That’s all fine, but Jumanji needs Robin Williams’ heart. This one overdoses on the kinetic to try and hide from that loss. It doesn’t work. 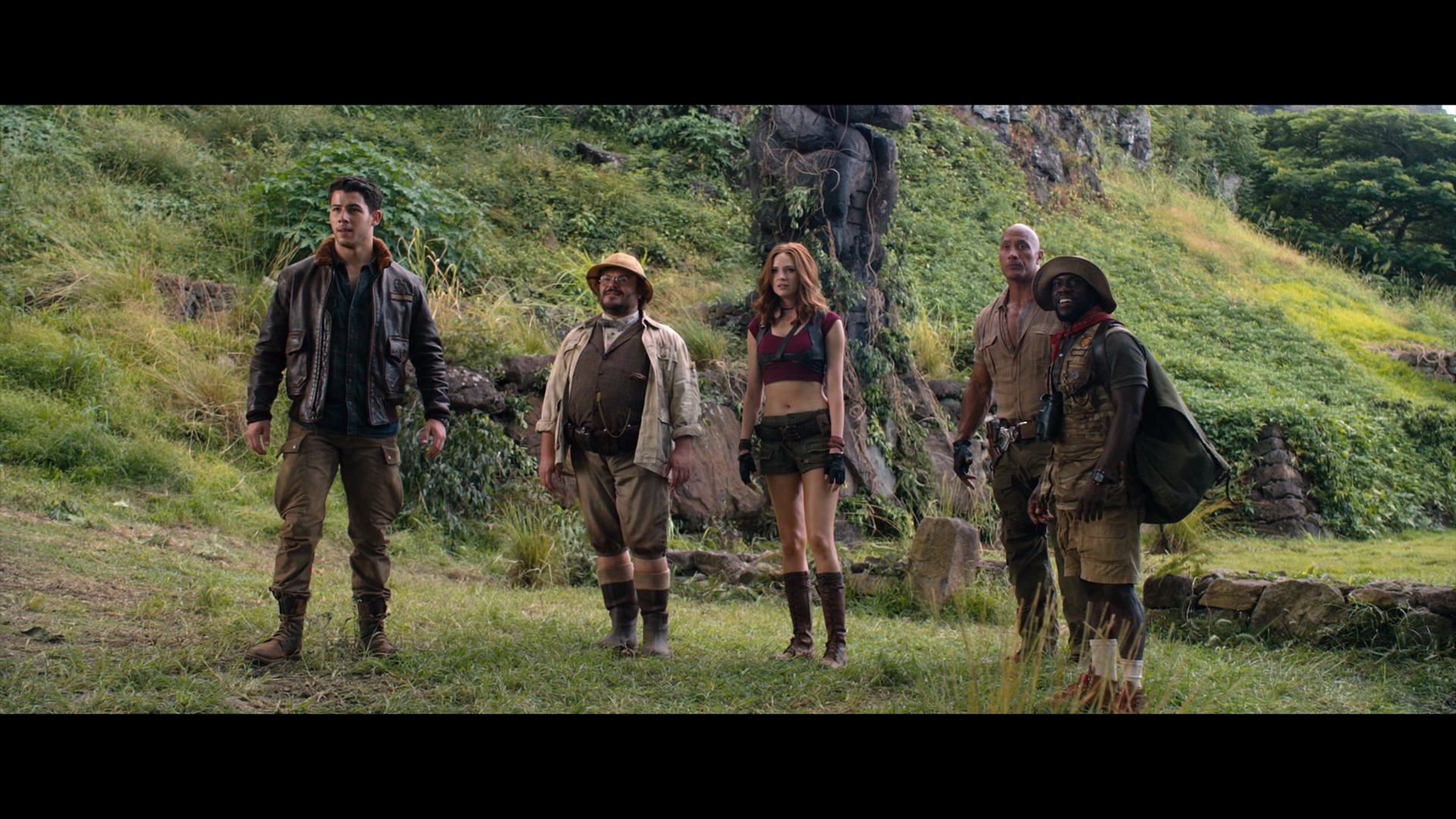 It’s a shame Jumanji was finished at 2K. The jungle scenery is crying out for a true 4K treatment. The upscale process certainly keeps plenty of fine detail, resolving the plethora of foliage as well as facial definition. Patches on Kevin Hart’s shirt show stitching clearly, and sunny cinematography gleans off Johnson’s face, creating exceptional fidelity.

With outstanding brightness and depth, the Blu-ray is a stunner for the format. Other than a lone scene inside of a shack, there’s no visible noise or other visual impediment. Striking use of color spends extensive energy on greens, with pleasant flesh tones.

The ominous drums of Jumanji rock enough to ruin a foundation. The power and depth of the rattle is worthy of a reference stamp. That joins the fury of animal stampedes and the panning engines of a motorcycle gang. Combined with the explosions from missiles (and other action) and Jumanji comes to play with this Atmos mix.

Wonderful use of positional channels succeeds in quieter moments like a school gym (panning thrown balls and kids running) or jungle ambiance, and mammoth action scenes as animals run down the team. A helicopter-led sequence passes between speakers with energy, effortlessly flying overhead. The same goes for the motorcycle chases, jumping around the soundfield with precision. A great track worthy of shelf space.

Prepare for generic studio work, beginning with 15-minutes of Journey Through the Jungle. It’s marginal, looking at the set’s activity with typical cast/crew interviews. A dull look at the cast features in Meet the Players. Stunts earn their due in Surviving the Jungle and Attack of the Rhinos details a complex effects scene. Many on the cast look back at the Robin Williams-led Jumanji with reverence in the final featurette, followed by a music video and bland gag reel.

Jumanji’s sequel/reboot lacks the heart of the original, and even if the message is a strong one, the execution is dull.

The 15 unaltered images below represent the Blu-ray. For an additional 30 Jumanji: Welcome to the Jungle uncompressed screenshots, early access to all screens (plus the 10,000+ already in our library), exclusive 4K UHD reviews, and more, support us on Patreon.