It’s difficult to laugh at I, Tonya. So much of the Tonya Harding story plays as legitimate tragedy of circumstances. Harding is abused by her mother. Her father leaves. When she’s older, she can’t escape her abusive husband. The skating authority looks down on her. It’s a story of class separation and smugness, and the woman who only wanted to prove everyone wrong.

Then again, the sordid details of Harding and the media-produced rivalry against skating rival Nancy Kerrigan reveals a slew of idiocy. Delusions of grandeur, moronic criminal activity, and trashy behavior – I, Tonya offers them all. That’s hilarious.

Everyone plays this better-than-fiction true story with a slice of ironic indifference. Allison Janney as Tonya’s mother never stops sucking on cigarettes, distant from her daughter unless making physical contact for purposes of abuse. The rest is a demented mental game of which Janney owns, portraying an evil woman with self-indulgent ideas of what her daughter might become.

… sequences of abuse and recurring black eyes must marry to a goofy, moronic crime tale composed by idiots. I, Tonya manages

I, Tonya is persistent with its sense of class. Judges ridicule Harding (Margot Robbie) for her lack of expensive gear. Some of her mother rubs off on Harding who feels – rightfully at times – unable to break into the circuit based on her financial status. She rarely takes blame, instead deferring to some one or some thing else. Robbie plays this with flawless, deadened emotion, finally breaking down by the close. The maturation of her character organically falls into place, with an expertly composed arc by writer Steven Rogers.

Balance in tone is crucial for I, Tonya. Showing sequences of abuse and recurring black eyes – even a knife stab – must marry to a goofy, moronic crime tale composed by idiots. I, Tonya manages. When cruel, it’s hilariously so, edited swiftly as to let nothing linger. Being mindful of the surrounding media circus adds layers, a background commentary of news cycles and their intensity.

Harding becomes swept up in the fervor and attentive TV cameras. In certain eyes, she’s a hero, puffed up by reporting and headlines. That’s what she craved. For I, Tonya, that adoration determines her character, this watery-eyed heroine trapped by people who made abhorrent career decisions for her.

When the cameras leave, she’s no longer in front of flash bulbs and microphones. She’s shown in her kitchen, disheveled, speaking to a single interviewer. Her multi-time ex-husband Jeff (Sebastian Stan) watched his “fame” leave his front yard, and I, Tonya inserts footage of O.J. Simpson on the TV next to him. That was the next major story. Jeff stands forgotten, alone in his living room. When he’s interviewed, it’s in his wife’s hair salon. It’s a stroke of sly commentary in a story of people who barely deserved public attention. I, Tonya has a blast with it. 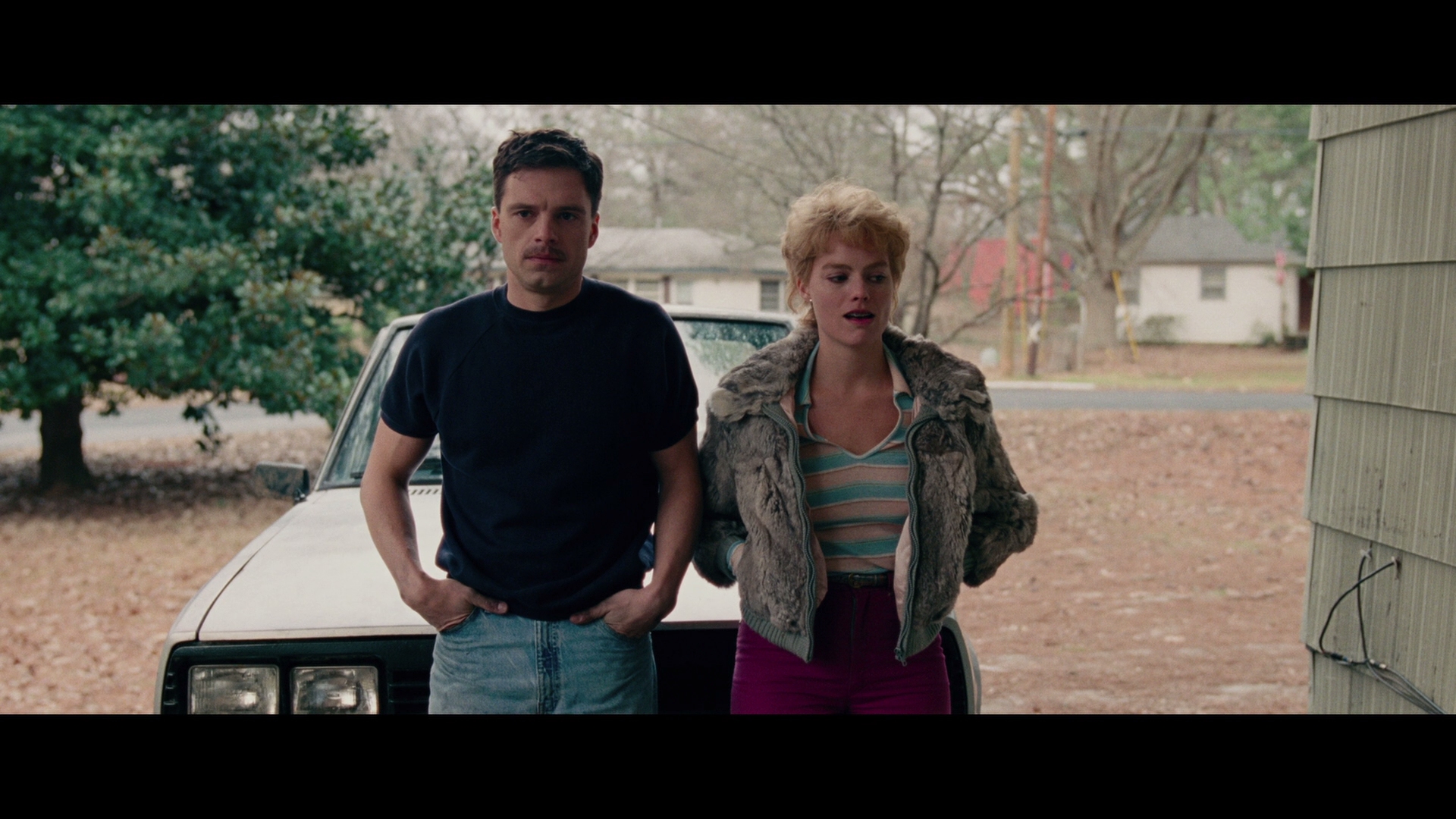 Shot on 35mm, I, Tonya comes to Blu-ray with flawlessly resolved grain. Even in the earlier stages with a young Harding, grain skews thicker and this Universal encode still doesn’t reduce to noise. It’s stellar compression work.

Outside of stadium atmosphere, the center-staged DTS-HD mix relies on positional channels only as necessary. A vibrant soundtrack is the highlight, extended outward and pouring from the stereos with great fidelity. That, along with a shotgun blast, provides the only LFE usage.

In those stadiums though, the mix makes itself known. A critical scene late showers Harding with specific cheers from the crowd, coming from a variety of directions. It’s a fine use of the available mix.

Director Craig Gillespie offers his thoughts on the production via a commentary. He then pops up during a five-part behind-the-scenes feature, running 15-minutes. This skews toward EPK status, although a bit on visual effects reveals how substantial the work was. Five deleted scenes then run quite long at 17-minutes, but include a number of laughs worth watching.

Tonya Harding’s side of the early ’90s media circus is portrayed in the wildly funny and dark comedy I, Tonya.

The 15 unaltered images below represent the Blu-ray. For an additional 19 I, Tonya uncompressed screenshots, early access to all screens (plus the 10,000+ already in our library), exclusive 4K UHD reviews, and more, support us on Patreon.