Based solely on what he created in Downsizing, Alexander Payne must hate everything. Billed as a quirky comedy about tiny people living in a tiny world, Downsizing instead belittles and preaches. It does so with a cold tone and cruel eye toward civilization. No one in this movie enjoys themselves.

Downsizing doesn’t miss anything in terms of humanity’s worst. There’s poverty. Bigotry is enacted. Capitalism takes a hit. The inability of people to ever fix problems is a central feature. On a smaller scale, stomach cancer, death, divorce, and greed – all of them drop like a severe thunderstorm drops rain.

The central conceit, that of people choosing to shrink themselves to micro size to better the environment, is well-explained, arguably too much so. Don’t worry – Downsizing takes the fun away soon. After Matt Damon undergoes an embarrassing body shave to begin his procedure, forget the humorous satire.

This cellular downsizing process is rapidly monetized worldwide. It’s designed to cure overpopulation and climate change. Soon, the opportunities for business mirror that of the early 2000s web bubble. Mini people need mini things. Those mini things mean profit, and citizens of this microland choose to squish their bodies not for the world’s benefit, but in a rush for dollars. Were that it for Downsizing, Payne’s concept had potential. An anti-capitilist fable starring a pint-sized Matt Damon – that might work.

For the final 40-minutes or so, Chau is the lone reason to watch

Soon, Downsizing turns its eye to the poor of this world. They live in makeshift shipping crate apartments, just outside the town’s erected wall, where inside, the white and European people live. Foreigners make up the apartment dwellers. Still, there’s a sense of heavy-handed sweetness. Well-to-do people only consider how to screw others with phony goods and exploiting loose laws. The poor take Olive Garden leftovers to the disabled in their complex after work.

That’s the beginning of Downsizing’s descent. Downsizing still has moments of brevity, even some out of place. The showstealer here isn’t Damon or Christoph Waltz. No, it’s the perky Hong Chau, a delight in her role as a kind house cleaner keeping her shipping crate community together, and on one leg. She’s honest, forceful, and the best thing about Downsizing. For the final 40-minutes or so, Chau is the lone reason to watch.

Then comes the total fallout, a downer ending of such gravity, it’s clear what Payne wants to say. None of this is really worth it. The kindness is not. The sense of community is not. The creativity is not. Nothing is. We’re doomed to fail, the Earth will die, and sun will eat us all alive… and so on. And to think some people will spend part of their time left watching Downsizing. 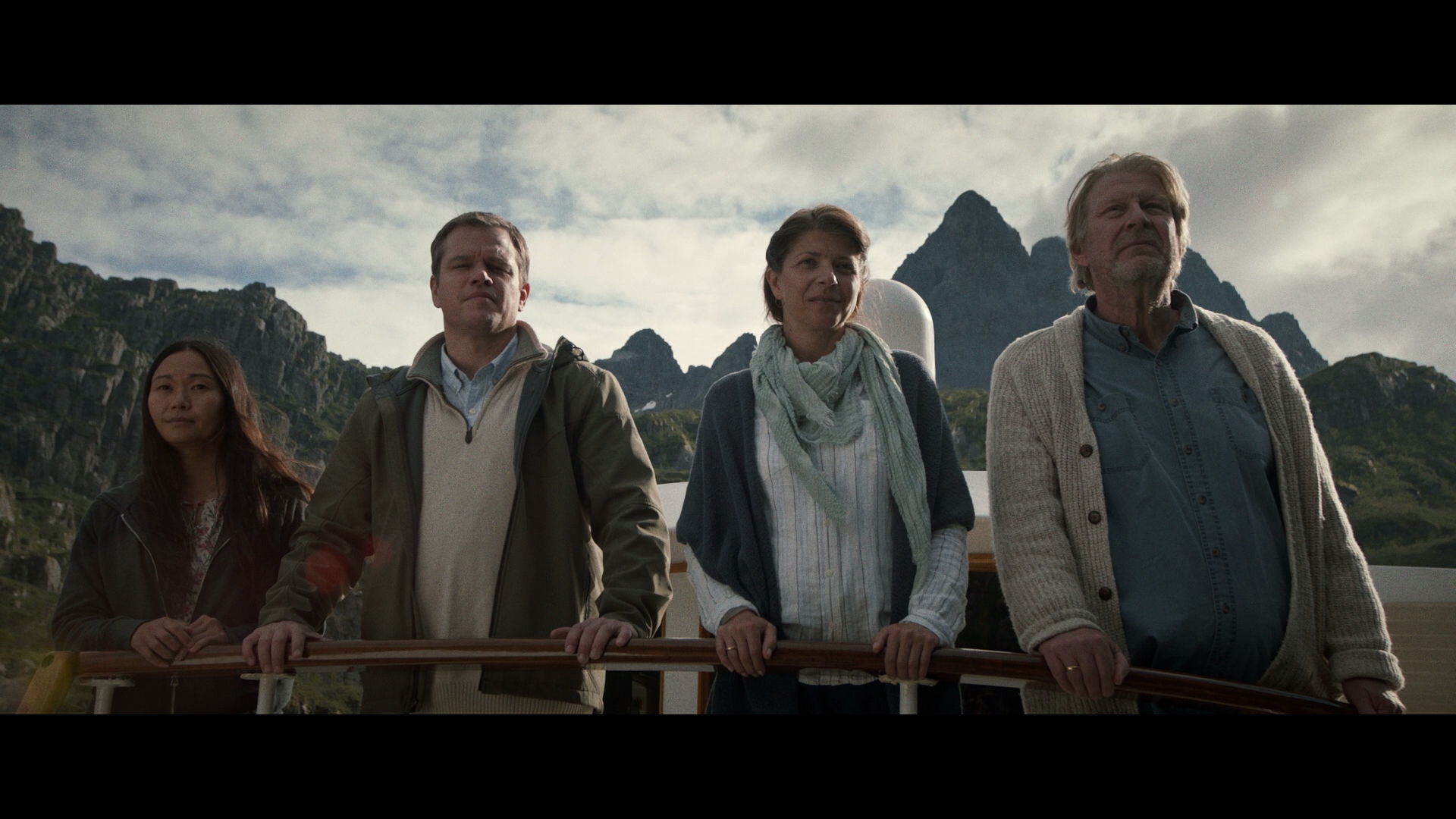 Paramount puts Downsizing on UHD, pulling from a 2K digital source. There’s a faux grain layered over the image, utterly inoffensive and adding a touch of texture. That’s good since the resolution doesn’t favor much in the way of strong detail. Close-ups prove adequate and the numerous exteriors of the small world carry enough to get by – just enough though.

Downsizing comes with a mild palette, reserved but punchy on occasion. There’s a vintage look used here, warmed up if keeping natural flesh tones. A few lighter primaries add a spark. Skylines and late film cinematography of Norway lay it on.

The use of warmer tones takes some of the contrast out. Looking at clouds, a tinge of orange slips into the whites, lessening their brightness. That leaves the fairly mild HDR effects to add zest, held back for use on lights inside bars or parties. It’s rudimentary. At least black levels show up, quite dominating at night and excelling during a key moment at Downsizing’s end.

Encoding doesn’t handle the grain structure with the necessary clarity, tending to jump and invade the image with regularity. It looks too harsh, as if sharpened even if no other indicators show as much.

Otherwise, Downsizing offers unremarkable HD imagery with enough detail and resolution. Close-ups show minimal facial definition while clean establishing shots do well to show off the tiny realm. Black levels do lead to some crush, if an issue contained to the third act. A pleasant roster of colors enhance the appeal.

More often than not, Downsizing takes place in crowded areas. Parties, bars, and populated outdoor situations fill the soundstage. There’s a reason for the DTS-HD 7.1 mix to exist, doing well to fill space. The opening scenes in an auditorium fill the rears with various gasps from the crowd. Later, the atmosphere at a party swells to reach each channel.

A fine bit of directional work extends the front soundstage, Doors open and close in the stereos. A few pieces of dialog break from the center too. In terms of low-end support, that’s coming from music. Damon sits under an upstairs party, rocking along with a nice bass line. When he heads up to join, the bass becomes thicker. It’s a nice bit of movement from the sub alone.

Bonuses turn to fluff rather quickly. Praise for Alexander Payne and Matt Damon fill two of these featurettes, and there’s another for the cast as a whole. A Visual Journey is the first one worth watching, detailing the production design for 14-minutes. Visual effects earn their due in A Matter of Perspective. That one goes for nine minutes. Finally, A Global Concern looks at the various issues Downsizing considers.

Matt Damon stars as a shrunken man in a shrunken world with big world problems in Downsizing, an insufferably nihilistic look at society.

The 15 unaltered images below represent the Blu-ray. For an additional 25 Downsizing uncompressed screenshots, early access to all screens (plus the 10,000+ already in our library), exclusive 4K UHD reviews, and more, support us on Patreon.