The high camp moment of Justice League happens near the finale when Superman makes his predictable return. An edit cuts to Batman who glows, sporting a smile rivaling that of a child holding a new puppy on Christmas morning. It’s hilarious. It’s not supposed to be, and on par with the hokey “Martha!” line in Batman v Superman.

DC’s superhero tales come, purportedly, from a place of emotional maturity. Look at the moral complexities of Man of Steel. Now look at the goofy giddiness of Justice League; the two don’t pair. Justice League approaches Superman III levels of kook, from Lois Lane honestly noting that Superman “smells good” after rising from his premature grave to the now infamous digital mustache removal on Henry Cavill.

It’s partially a case of lackluster and listless screenwriting, childishly obvious in intent. Justice League concerns a team being stronger than one, reinforced through blatant dialog and visual massaging. Hope brings us together, and that hope is Superman. The allegory writes itself yet it takes two hours for Justice League to find.

The length in this case is partly a blessing, allowing less time for this DC outing to bleed out

In the opening moments, Justice League is intent on losing the audience. A homeless man sits ignored, because the world lost hope, as if Superman’s mere presence solved an international crisis. Be mindful: This comes after two films wherein Superman caused a minor cataclysm in populated city squares. Maybe Superman himself is at fault for homelessness. Also in Justice League’s world without Superman, racists roam free, knocking over the fruit stand of a Muslim store owner. The implication – that racism didn’t exist when Superman was around – is… well, there’s hardly an appropriate word.

The lack of spark on the part of DC creative team, director Zack Snyder and writer Chris Terrio (with a screenplay from Joss Whedon), is to an appalling level considering the wealth of potential in these properties. Justice League’s familiarity and routine story progression never ignites. Part of that falls on rushed character development. The Flash (Ezra Miller) comes off as a terrified, wimpy dork. Cyborg’s (Ray Fisher) emotional revelations carry minimal weight sans backstory depth. There’s no room, and yet the overcrowded Justice League is the one failing to crack two hours, not Wonder Woman’s or Man of Steel’s solo outings.

Justice League isn’t ruinous like Suicide Squad and Batman v Superman were. The trimmed length is partly a blessing, allowing less time for this DC outing to bleed out. There’s a true attempt to inject physical color into the proceedings, with flashier costumes and actual light filtering in. The tone is lighter still, with dopey one-liners and sarcastic jabs.

Using fragments of John Williams’ Superman and Danny Elfman’s Batman themes generates a touch of excitement. Each is smartly used, at least until it’s realized that aside from Wonder Woman’s scintillating electric guitar riff, none of these heroes were deemed worthy of a new memorable cue. That says a lot. 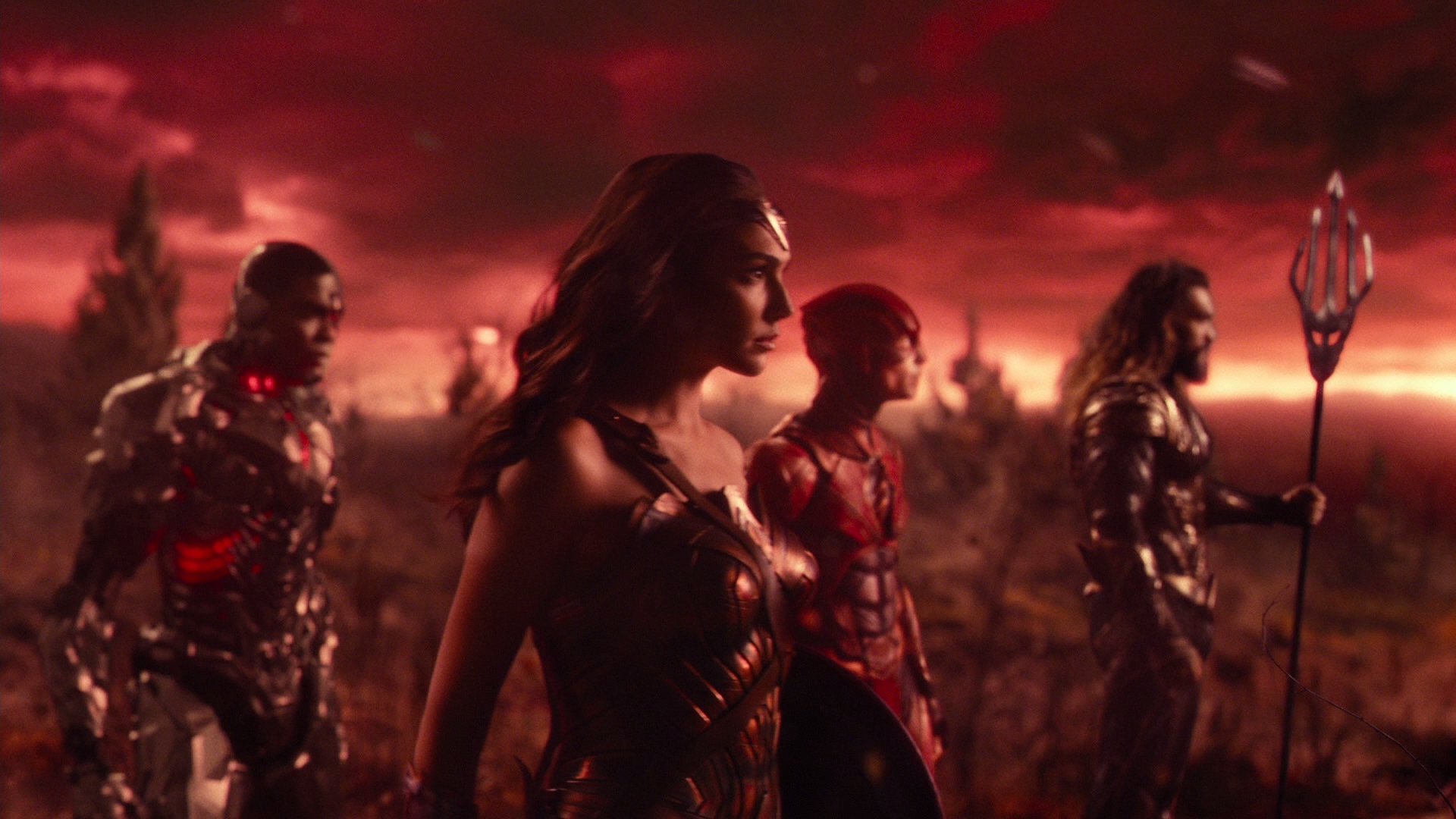 From a 2K source, Justice League isn’t a standout for its resolution. It’s well resolved with sharp facial definition and excellent fidelity on the various superhero suits. Watch for the rubber texture on Batman’s cowl; it makes a frequent appearance. Likewise, Superman’s thickly stitched suit calls for fine detail and this disc provides.

A small grain structure sits over the image, pairing a mixture of film and digital seamlessly. Only a handful of scenes struggle with this grain, cleanly and naturally handled by the encode. Even when it’s thick – along a skyline or in a handful of medium shots – the intrusion is inoffensive.

Warner’s Blu-ray encode battles the grain structure and at times unsuccessfully,. It’s imperfect, reduced to pure noise with frequency, or at least enough to be a bother. Luckily, the impact on finer details is minuscule as Justice League presents textural fidelity unimpeded. Facial definition makes itself known.

Bright color and sizable contrast makes for a readily appealing image. Black levels crush on occasion but without significant impact. Contrast adds the opposing end for a stable, well calibrated sense of depth.

More in the realm of depth is the 3D presentation, powerful for a mainstream production these days. With all of the visuals effects, the screen is flush with ambient objects panning in the camera’s view, whether dust particles, lightning, or embers. All of the flying creatures and gadgets establish deep dimension, with stout foreground attention.

A few moments pop with showy moments, the best coming as Batman tosses a Batarang at Barry Allen. In the speed force slowdown, the Batarang hangs in the air, poking free from the screen in a great bit of classic 3D. That’s not all Justice League offers though. General conversation and environments offer substantial stretch, believable and natural. This is an outstanding conversion job.

There’s a war’s worth of bass in this movie, slamming hard into the low-end for every thump, punch, explosion, or teleportation. Justice League sells the power of its heroes and villain. Tight LFE support varies in intensity, providing a great mix of differing rumbles. The three boxes generate exceptional force when active.

Inside the sphere of Warner’s Atmos offering, pans offer frequent moments of surround use. Parademons whip through the soundstage and when underwater with Aquaman, the constant swell of waves fills the full width of this soundstage. It’s not the most prominent use of positional channels, but it’s worthy of blockbuster status. Constant action and ambiance help.

Warner slaps a “bonus footage” sticker to the front of the slipcover. The two minutes provided are not worth the excitement. Featurettes begin Road to Justice, detailing the team for 14-minutes. Heart of Justice shrinks that same idea to the core trio of Batman, Superman, and Wonder Woman, spending 12-minutes on them. As a follow-up, The New Heroes brings up Flash, Aquaman, and Cyborg to explain their characters (better than the movie itself). A throwaway look at Justice League’s villain only has three minutes to dive into Steppenwolf.

Technology of Justice League delves into the design ideas for the various gadgets. Four featurettes on key scenes total 15-minutes, with a peek at costume design finishing off the disc in Suit Up.

DC brings a collection of their major heroes to the screen in Justice League and it’s just as ailing as their previous team-ups.

The 15 unaltered images below represent the Blu-ray. For an additional 33 Justice League uncompressed screenshots, early access to all screens (plus the 10,000+ already in our library), exclusive 4K UHD reviews, and more, support us on Patreon.