Thor: Ragnarok shows how versatile the Marvel Universe can be. It’s a slew of beautiful colors, wacky action, and importantly, a stream of comedy. It’s hilarious. Despite the gravity of the events – an entire world falls by the climax – Ragnarok has a blast getting there. The sarcasm and belly laughs continue throughout, and it’s done with a sizzle no other Marvel property produced to date. There’s not a lick of maturity here, and Thor: Ragnarok better for it.

Read our full theatrical review of Thor: Ragnarok for more.

Disney’s 4K UHD is a dazzler, shooting beams of color everywhere. Miles of emerald greens, a bevy of oranges, and an entire planet – Sakaar – exists as a place of colorful trash. Each scene presents something of note, whether a slew of background primaries, wildly designed costumes, or set work. There’s arguably more color in Thor: Ragnarok than in many animated offerings.

While a 2K source, there’s still a strong sense of fidelity and detail. Close-ups deliver texture and the costume work is a consistent high spot. The golden stitching on Jeff Goldblum’s outfit is great. It’s even possible to make out the cracks in his make-up. Perfect digital clarity avoids any pockets of noise.

A small resolution choke is noticeable when Thor first lands on Sakaar. Looking into the distance, the piles of garbage muddy up, lacking the same firmness of other exteriors. That’s just one shot though, and the rest of Thor: Ragnarok handles itself with prime clarity. 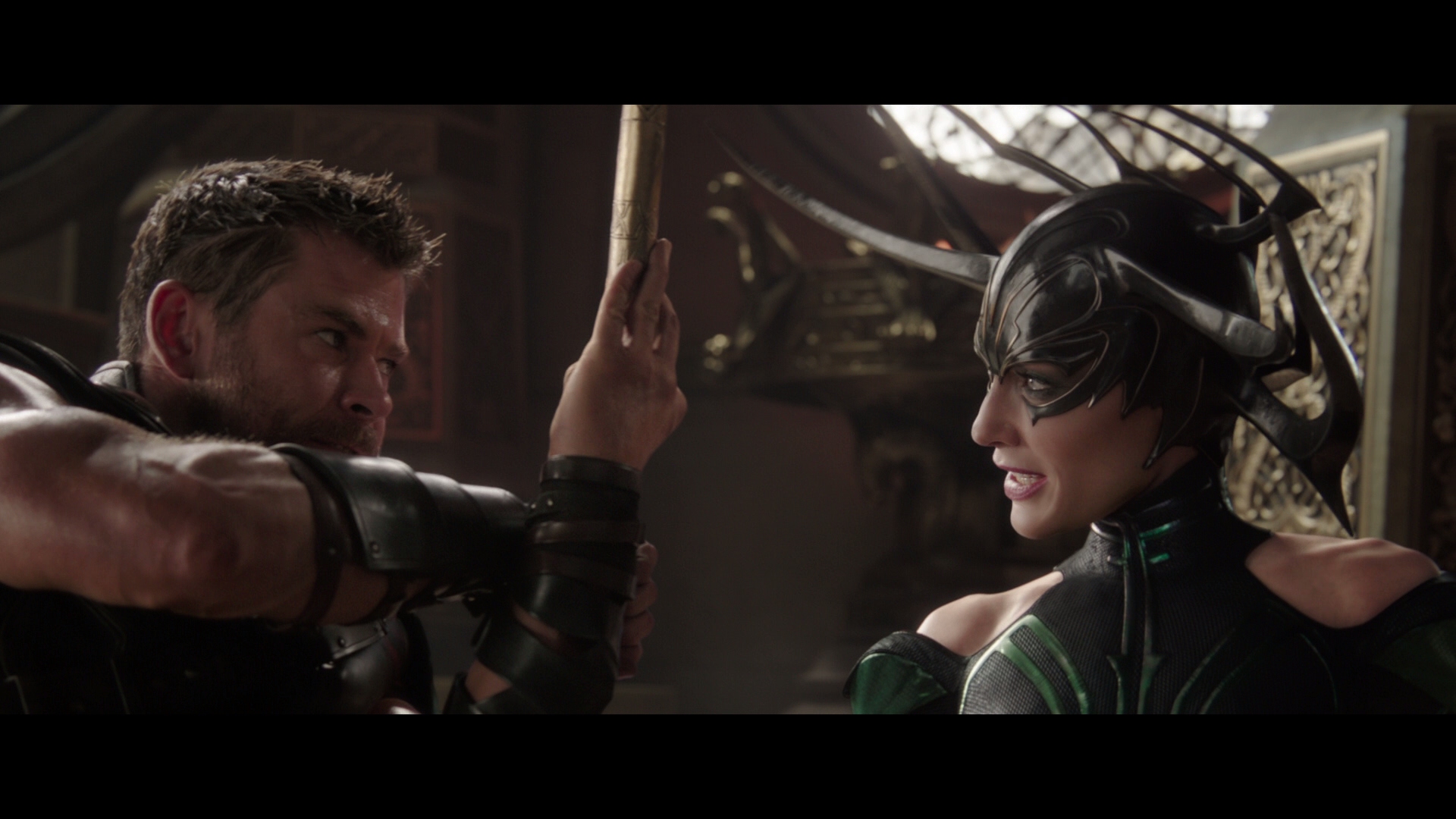 Pretty colors highlight this disc, creating a well saturated world full of variety. High brightness and stout blacks add pop. Superior clarity and sharpness won’t be hampered by noise or other anomaly. Disney’s compression moves out of the way and the source is perfect.

Unfortunately, Disney handicaps the Blu-ray, using DTS-HD as opposed to the UHD’s Atmos. It’s a stupid trend, and not only on the part of Disney. Either way, it’s a somewhat quiet mix. Turn this one up a few notches to feel the full range.

Once there, Thor: Ragnarok is a lively one, bursting with energy and plenty of room shaking bass. Thor and Hulk blast each other with fists and weapons, a powerful sequence sure to satisfy. Once spaceships start firing lasers at one another later, it’s an even better rumble. The engines roar and each hit rocks the sub.

Fun panning moments range from the expected (vehicles sweeping around, Thor’s hammer whipping between channels) but also the goofy (Hulk bouncing a ball behind a conversation, changing direction with the camera). Full stadiums send cheers in a full 360 degree sound melee, and ambient events crowd Sakaar. By the final battle in Asgard, it’s a total melee of audio that only grows alongside the action.

Director Taika Waititi steps into the booth to provide a solo commentary track, this followed by a series of five featurettes totaling 34-minutes. These mostly discuss characters and the actors.

A funny gag reel has a few moments, but the real laughs come from a series of five deleted scenes (all of them worth watching) and another Team Darryl short, this one with Jeff Goldblum. Marvel Studios: The First 10 Years is a pat-on-the-back promo, but after pulling this off for so long, let the Marvel team have one. Finally, two short pre-vis videos titled 8-Bit Sequences are certainly not 8-bit, but a unique look at the action planning regardless.

Choosing total laughs, Thor: Ragnarok develops Thor into a total goofball, and then takes the whole film in that same direction.

The 15 unaltered images below represent the Blu-ray. For an additional 31 Thor: Ragnarok uncompressed screenshots, early access to all screens (plus the 10,000+ already in our library), exclusive 4K UHD reviews, and more, support us on Patreon.