What timing. The week Three Billboards Outside Ebbing, Missouri releases to home video, a remake of Death Wish hits theaters. Surely, it’s coincidence, but both films concern an element of revenge and frustration over the legal process. For Death Wish, the solution is masculine rage, a violent, gun-fueled vendetta to make right. Three Billboards just uses words.

Specifically, the wit and verbal ferocity of France McDormand, who without, Three Billboards would unlikely succeed. She’s fierce, willing to lay out hypocrisies in front of those committing them and toss $5,000 to a billboard company to say few words. Her daughter was murdered and the killer never found. McDormand’s Mildred blames the police. Publicly. On bright red, roadside signage.

There’s much to soak in via Three Billboards often masterful and frequently hilarious dialog. Ebbing is a mid-America town with the voice of the south. There’s a prevalence of homophobia and racism. Progressivism hasn’t penetrated this small town’s population, a definite red state, where an act of marginal civil disobedience – using billboards to speak out – disrupts the local culture.

Once the sarcasm and the wit is lost, so too is Three Billboards

Dark circumstances hang over the first act, but McDormand’s perfect determination in calling out those responsible hits the proper tone. In an era of nationwide marches and protests, Three Billboards gives a potent voice to one, inspiring then to a crowd of thousands or millions. That’s important.

Where it chokes then is tone. Three Billboards bumps into itself, charging headlong into the pent up emotions and eventually, indirect violent actions. It’s dark and eccentric; that’s fine until Three Billboards cries too much, disruptive in terms of character, and more so in terms of story. Consequences fail to appear, leaving those emotions stalled.

There’s no solution to Three Billboards’ problem. That’s ultimately frustrating, doubly so when the emotive properties fail to deliver answers. Three Billboards’ final drive toward the horizon isn’t satisfying. It doesn’t have to be, but the cause and Mildred’s infinite likability too quickly fades. What empathy is found in this fiery, proactive woman feels pushed aside. Her spark is gone. So then is a viewer’s interest, a letdown for a film with such a darling set-up. Once the sarcasm and the wit is lost, so too is Three Billboards. It’s a vicious come down. 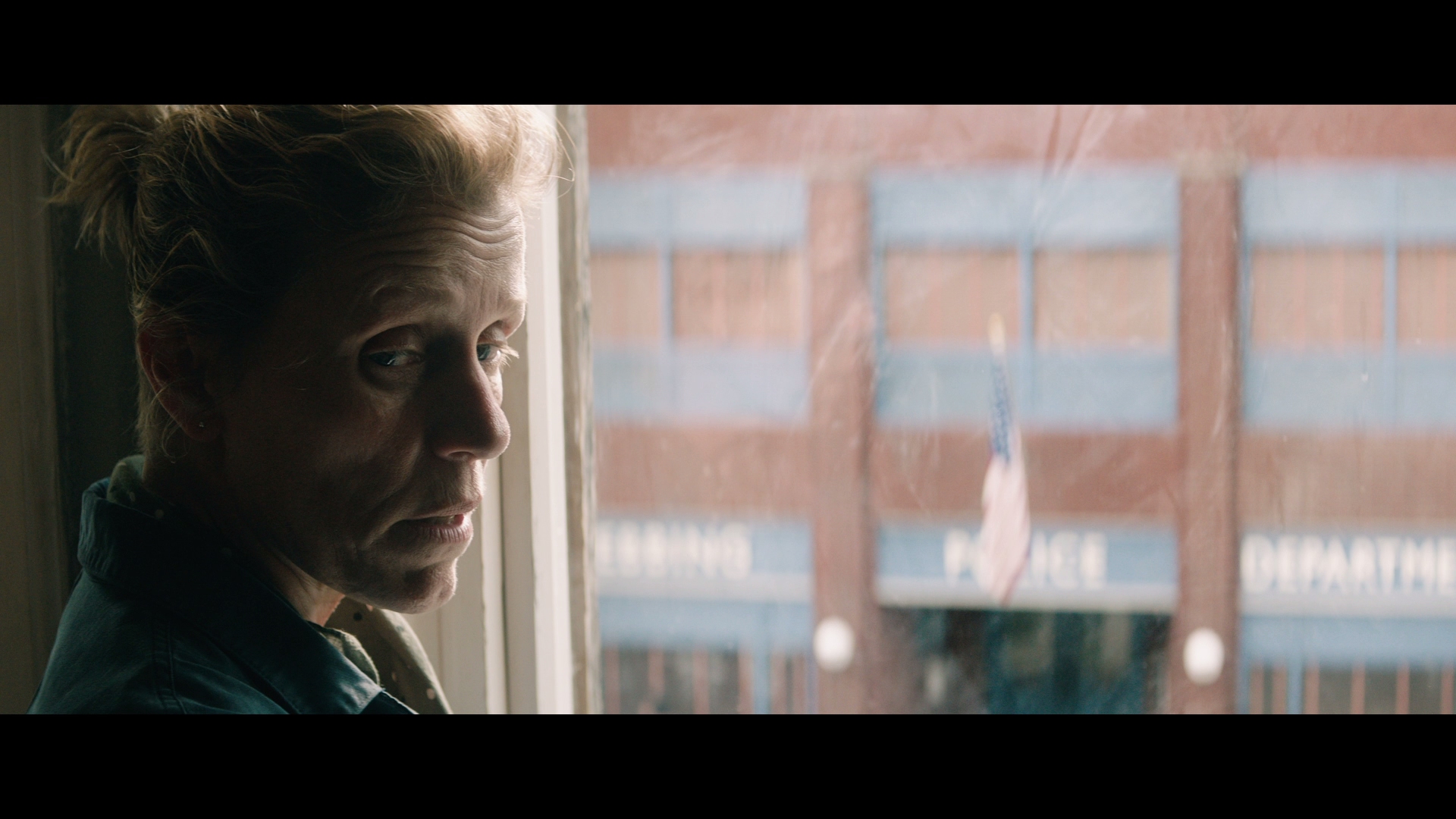 With a 2K source, the benefit to Three Billboards is in the outstanding levels of contrast at work. The small town is under constant sunlight, providing a persistent source of contrast. Beautiful black levels complement each scene, offered with superlative consistency.

Strong flesh tones and other primaries hit with force, dark but with exceptional density. The billboards pop with their distinctive reds and main street offers a great palette to work with. Brick and wood buildings line the streets with enough colorful decoration to become an attraction.

A small jump in visual fidelity is evident over the Blu-ray, especially at distance. Facial definition remains high, and the textural levels of this American town is evident at any moment the camera strolls outside. An outdoor fishing scene spreads debris all over the ground, a great bit to appreciate the available resolution.

Fox delivers a clean presentation for Three Billboards. The digital production endures a touch of inconsistent noise but otherwise graces the Blu-ray unobstructed.

Bright cinematography certainly gives the feature some zip. High contrast seeps into the heart of the image, creating a strong sense of dimension. Black levels don’t equal out (never offering true black) yet cause minimal concern.

Digital grading fades the color palette down to pastels, with a touch of chalky flesh tones and contrasting pale blues. It’s dour yet bright enough to maintain an attractiveness.

Routine audio in the form of a DTS-HD mix keeps dialog centered and ambiance missing. Three Billboards has two sonic-driven moments, both involving fire. Surrounds engage in limited ways. The subwoofer involves itself a bit to accentuate flames (and an explosion), albeit minor.

There’s little to do or mix in such a dialog-driven film. Three Billboards doesn’t surprise in any way other than maintain a status quo.

Crucify ‘Em runs 30-minutes, a fine behind-the-scenes peek, tracking production from its origins through the end of the shoot. It’s expansive and well produced. Six deleted scenes (and no play all option) come next, with director Martin McDonagh’s 2004 short film, Six Shooter closing things down (aside from a photo gallery and trailers).

Frances McDormand is a powerhouse and Three Billboards’ heart, an inconsistent film in tone but soaring when it’s working.

The 15 unaltered images below represent the Blu-ray. For an additional 13 Three Billboards uncompressed screenshots, early access to all screens (plus the 10,000+ already in our library), exclusive UHD reviews, and more, support us on Patreon.